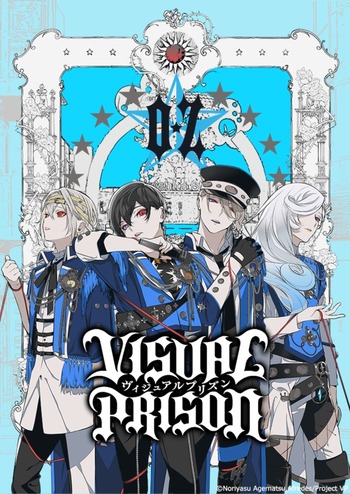 Visual Prison is my most awaited seasonal title of Fall 2021. It’s all about musical Visual Kei bands battles with ikemens vampires (Visual Kei is a muscial rock-punk-gothic genre really easy to the eyes). Not gonna lie to you, there is a lot of fanservice, but I really was over-enjoying over this Visually and Soundly great title, and here let me explain why :

• Story : 7/10 •
We mainly follow the debuts of « OZ » bands, where our main character, Ange cross path with other Vkei groups Lost Eden and Eclipse during one of their shows in Harajuku. He will then stumble across his favorite singer, Guiltia, here and so began the debuts of Ange’s wonderful voice which will be able to gather talents around him. The main goal of these bands are to win the favor of the Scarlet moon and participating in the Visual Prison’s event to gather scarlet tears. If you reunite at least 10 tears, you will be able to make a miracle.
Dramas event happening, OZ’s band sure need these tears for them.

• Art : 9/10 •
Ikumi Katagiri takes charge of the original character designs, and even if you’re not enjoying the story, you can at least see how beautiful the fashion and characters are.  There is unfortunately some CGI used during performance and battles, but aside Visual Prison is visually pleasing.

• Characters : 8/10 •
The character development is in the center of the story, we get to see the main band but also other bands backstories, and why they’re all fighting for these scarlet tears. Their relationships and interaction are also evolving through episodes.

• Sound : 10/10 •
As a Visual kei listener, I really loved all the band’s songs, Elements Garden composed the music for this anime and with a really good Voice Actors selection, we can fully enjoy the music and voices through the opening, stage performance, practices and ending.

• Enjoyment : 9/10 •
I was waiting for Friday to come quite excitedly, I was thrown back in my old teenage day, fangirling on Vkei bands and looks. This series is not a BL, there is no explicit gay interactions, but ambiguous and bromance vibe was part of the charm and enjoyment of the series in my side.

• In brief : 9/10 •
Overall, I know the score will most likely never be high, the male fanservices moment might frighten most of you (if you’re not a fujoshi, that’s it) but at least you can give a try to this visually and soundly pleasing title. The story with the Scarlet Moon doesn’t make a lot of sense, but if you enjoy Visual Kei songs and beautiful characters, it’s not gonna be that bad.

Honestly I can't explain it, but this was not as bad as I expected :)
I looked at it and instantly though Diabolik Lovers and Dance with Devils but this is way better then those in my book. This ain't a weird supernatural wonderland written by a masochist (most likely), it actually didn't have romance!!! I honestly wish more shows took the direction this took with a big identity reveal that wraps up a mystery of the main character and impacted ___ amount of other characters due to relation with this answer.

All I am saying is it could've went down hill real fast but didn't :)

Just perfect nothing else to say though I could do without the CGI but other than that it was a great anime.

This is truly a hidden gem of an anime! It was too short sadly which caused the pacing to feel too fast for character development and the story suffered from that. I would have liked a longer season so the show's story could have been more polished since parts of it make no sense. When judging this anime I decided not to look at it as a traditional anime since it's more of a Visual Kei musical. The songs are just 10/10 for me and I find myself playing them over and over again because they are sung so well!

WARNING! (Read below for triggers)