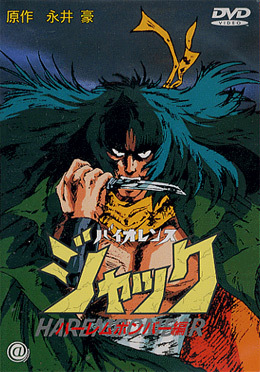 Both anime were made in the 80's, take place in a post-appocalyptic setting, and are very violent and gory.  Be warned that Violence Jack contains graphic rape, while the Fist of the North Star movie does not.  Still, if you like one, you might like the other.

These are both anime from the era when nudity and gore were quite prevelant in anime. Both of these titles have enough blood and guts to satisfy even the most hardcore gore fan.

This is usually where I'd say neither anime has much in the way of plot, but Fist of the Northstar at least tries to have a plot with some substance, unlike Violence Jack, which is all about the mindless violence. Both these anime have similar post apocalypic settings with main characters that are superpowered death machines, killing or maiming anyone that stands in their way.

Fist of the North Star is a better anime and while it does wallow in the violence it usually stays in the fun spectacle territory, whereas the violence in Violent Jack is quite unpleasant, especially the violence inflicted on women.

If you like blood and guts then try out either of these titles.

There was once an ogre mother who gave birth to a human looking child. Instead of an ogre's horn, this child was born with a sword in hand called the "Onigirimaru" or Ogre Slayer. He has no name and is only refered to by the name of his sword. Believing that he will become human once all of his kind vanished from the world of humans, he sets out on his destiny to slay all ogres.

Anime can be a medium of admirable creativity and sophistication, but Ogre Slayer and Violence Jack share the determination to linger on their portrayals of human depravity. Both are gruseome tales of lonely warriors supposedly fighting in the name of justice, while the world they inhabit is plagued by violence and rape. Violence Jack may be considerably more offensive with repulsive sexual violence aimed towards women, but if you liked one, I'd recommend the other.

In a post-apocalyptic world ravaged by earthquakes, grotesque monsters and powerful demons run rampant through the streets of New Tokyo. Only a select few people have been trained in the techniques necessary to defeat these creatures. Brothers Kakugo and Harara Hagakure not only possess the skills, they also harbor the power of the Zero Armor containing the souls of thousands of warriors. Separated from his brother, Kakugo roams the land fighting in order to restore some sort of peace and safety to mankind. However, he finds these monstrosities to be merely pawns to a much larger adversary from his past, who may prove to be his most dangerous opponent of all.

If you have a strong stomach and want some really gross over the top violence then try either one of these titles. The plot, characters and settings hardly matter in either of these titles, they are both all about the shock factor. Both of these anime have some pretty horrible acts of sexual violence that will turn off even the most hardcore viewers, but if you still want to test yourself with some truly over the top gore then either of these titles should fit the bill. Just don't complain when you're having nightmares about a giant demon woman tearing your face off and using it as nipple pastie.

Both of these anime take place in a post apocalyptic future where demons are trying to invade the human world. In both titles the plot matters very little other than to string together the fights, violence and gore. Both anime have plenty of pointless nudity.

Both of these anime feature an unlikeable lead with special powers killing and maiming any enemy that crosses their path. Violence Jack is more of a an anti-hero, whereas Demon City has more of a traditional lead character. However, both anime mostly just want to have creatively designed demons being killed in over the top violent ways.

If you looking for mindless violence then try either of these titles.

Both of these animea are set in a future where humankind is threatened by the existance of demons. These are both titles that feature a ton of violence, gore and pointless nudity. Both these anime have shitty early 90s dubs to add a special layer of unintentional hilarity to their mindless violence.

Wicked City is a little bit self aware of how silly its plot is and it tries to have a sense of humor about itself, where as Violence Jack is just bitter and cynical with a mean streak a mile long. However, these are both titles that will give gore fanatics what they are looking for. Neither anime has much in the way of plot, but instead use the story as an excuse to string one violent act to the next.

If you just want an anime with a lot of violence and little else to offer then try either of these titles.

If you like mindless gore and don't mind stiff boring characters or a paper thin story then these are the titles for you. Both these anime have some rather creative looking monsters and overpowered protaginists to eviscerate them real good. Both movies also have a very unpleasant serious tone that takes their over the top violence too seriously.

Violence Jack is an ugly bitter anime with a brutal protagonist that shows no regard for human life. Sin has a more generic team of tough good guys for leads, which at least gives the view something to route for. Violence Jack also has some pretty disturbing sexual violence and in general can be very gross to watch.

However, if you're looking for mindless action with violence, gore and a dash of tits then these check out these titles.

Take one big badass who prefers to rid himself of pests using the most violent means possible, and pit him against the evil plotters scheming to take over the world. Throw in lots of gore, meaningless and excessive deaths, a wicked twisted secondary female character with her own agenda, and you have the basis for both Violence Jack and MD Geist.  If you liked the random and copious violence in VJ and the aweswome virility of the titular anti-hero, you will probably very much enjoy Geist as well.