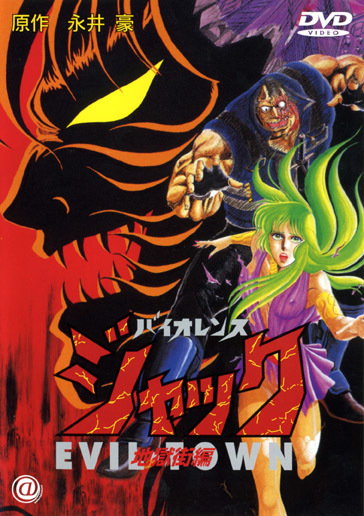 Do you like gore?I sure do like gore and Violence Jack gave me exactly that, peoples guts flying all over the place i remember Jack ripping a girl apart from her legs go up...that scene was so awsome!!!And there was a guy eating a dead girl and for some reason he tuened into some kinda freak, i didnt know hwat happened there but i seriously liked how he ate that girl.And off course the amount of rape scenes it had forget Gantz being so pornagraphic, Violence Jack by far surpassed Gantz in terms of rape(but overall i liked Gantz more).Now apart from the gore this show presented the movements of the chracters was so fluid it reminds me of epic movies like Ninja Scroll, Akira and Vampire Hunter D Bloodlust, yes just like those anime Violence Jack have detailed movements like that.However this is Violence Jack:Evil town i dont know if the rest of the Violence Jack OVA's do have detailed animation like this, at least effort was put into here but only those who like extreme gore should watch this, Elefin Lied is nothing compared to gore in this show Gantz as well is no match in terms of gore however, fist of the north star is a whole new level, but if you are looking for gore this show will satisfy you.Its during somewhere after 30 minutes have passed when this show steps up to the extreme gore i mentioned eariler.

Well nothing bad here, just some cool 80's style music.It really creates the mood of rebels terroising the place like the 80's heavy metal but it was somewhat misused in some areas, the Japanese vioce acting was kinda lame it felt as if they were just reading the script and putting almost no emotion into it, in sme cases however, the vioce acting was good I have never listened to the English version so I can't comment on that but the style of music was something I liked.

No emotions were given to the chracters they just felt like talking with no particular reason  like robots  no emotions no depth.Jack is the worst he stands out as being a robot with no emotions just he's kinda senseless thats what i think about him, worse part yet, he's the main chracter.

This OVA was only enjoyable due to the amount of gore it had in it, other than that, its pointless, so only if you are a fan of gore watch this if not, well you will hate this. Yes these scores seem unreasonable but it just has something about this anime that makes it great

Violence Jack is the psycho version of Fist of the North Star. You'll get plenty of action, blood and brutality. You probably haven't seen a film like this before.

On paper it is actually not that impressive: a strange story, mostly bland characters, a minimalist old fashioned soundtrack. But do you really expect a sophisticated plot from a film called "Violence Jack"? I hoped for brutal fights, nice action scenes and a heroic main character. And this is what you get.

It is hard to describe the style of this film: On the one hand you could say it is simplistic, dumb and provocative for the sake of it. On the other hand it is manly, dark and fierce. But it definitely deserves the label 'extreme'! It shows decapitations, rape, child murder, gun violence, cannibalism and more.

It might sound as if the film was nothing but one continuous provocation, but these scenes actually added to the atmosphere. (Although I personally could have lived with less sex scenes.) Together with the classic animation style and the nice character designs they made the film worth watching.

But to be fair, there are weaknesses: the story is dumb and doesn't really matter. And without going into detail, the end should have been more creative. Furthermore, the soundtrack is just generic jazz and 80's synths without memorable melodies.

Watch it if you want brutal fights, a cool mysterious hero and a dark dystopian setting. You'll be well entertained.

Don't watch it if you expect an interesting story or don't want to see gore. 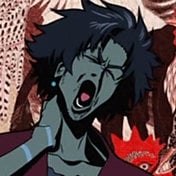 This is quite an old and odd collection of short films based on the manga Violence Jack. All 3 parts found on one disc in the official Manga video collection, Violence Jack is set in a dark time of global collapse as a giant earthquake destroys mankind's home and causes everyone to scrounge for life under city ruins, desperately hunting down food and entertainment, splitting off into different factions due to different mindsets, lust and general insanity. Released in the late 80's, this anime was certainly pushing the boundaries of censorship as it was largely banned and heavily edited in many countries outside Japan. The reasoning would go down to all kinds of perversions not considered suitable for viewing let alone involved in a series, such as its high sexual and violent content and taboo subjects like cannibalism, rape and bondage. I would advise you to check with the product info to find out whether or not it is cut, because if you are seriously considering buying this, then you probably don't want 15 minutes of controversy vanishing.

The plot very loosely revolves around a gigantic man 'Jack', named after his trusty jack knife with which he dismembers and disembowels his victims. In each episode, Jack dishes out all kinds of punishment to the scum of the earth, seeking some form of justice.. plus he seems to dig blood. The first episode is the most memorable and most interesting, taking place underground highlighting all the deeds and misdoings the factions get up too in times of major struggle. It turns into a brutal war when Jack is unearthed and pledges his allegiance to the numerous female victims. However it makes for uncomfortable viewing as one of the main antagonists and gang leader gets his kicks from eating or 'becoming one with' his possibly transexual sidekick blue. Not only this but several rapes and brutal deaths occur to the perpetrators. Along with some shoddy 'effect' during a fight scene (characters turn into red fluorescent lines), this makes difficult viewing all round.

The second and third pretty much revolve around the same idea - people get horribly assaulted and Jack extracts his jack knife justice, except instead of being underground, one is on the scrappy surface and the other based in a ruthless sex camp. The musical score is typically 80s and full of synth instruments and phoney jazz room bass. The stories aren't terrible and neither are the english dubs, but it depends whether or not you'd want to see an origins of hardcore anime type OVA. It certainly has enough violence to keep any gore buffs happy, but other than that its a pretty dark, hollow and clearly outdated anime.

Story: I thought this was Hell Bomber, or Harem Bomber. Harlem- whatever. Not Evil Town, which is what the location is called and not just the OVA. It's stupid indeed but it's quite accurate. The synopsis gives a surprisingly lengthy description of the anime but to sum it up: Violence Jack is freed, protects group C and kills a lot of people. That's about it apart from more violence and rape, but it's to be expected from something called Violence Jack 2: Evil Town. A subpar story is too good for this midnight showcase.

You shouldn't even expect anything shallow from the story. It would have been simple enough if not for the ending and climatic fight. That was some stupid messed up shit.

Animation: I thought it looked like it was from the 80's, and it is. The animation is from it's age and it shows. It's crap but it's 80's animation. And why did the start and ending go on for so long? Pointless and ate up another few minutes of showing wreckage and destruction. By the way, that last little tidbit has no effect on the score. Just wanted to mention it.

Sound: This shit was dubbed. It was so god-awful that it was just plain awful; the lack of emotion at times or half the time killed it even further and with the forgettable score. Don't know if there was an OP or EP so can't trash the score with that (If I can).

Characters: You have a character named Violence Jack, or who named himself Jack after his huge-ass switchblade. If a normal person were to wield it, it would simply be a big-ass sword. And that's all you need to know about him apart from he's the only decent human being- compared to the standards of Evil Town- that isn't female. The characters boil down to a few groups; innocent female, rapist, monster, monster rapist and scumbag and aren't as deep as Jack.

Gotta give props to a guy who names himself Violence Jack though.

Overall: Once again, it's called Violence Jack 2: Evil Town. I can't stress that enough as the title explicitly says "Violence against evil in an evil town! Evil town is violently murdered!", you can judge this anime by the title and you would hit the bullseye with what you come up with. You should have a tolerance for indecency, violence, blood, rape, violence and senseless violence. Don't forget to leave your brain with a babysitter.