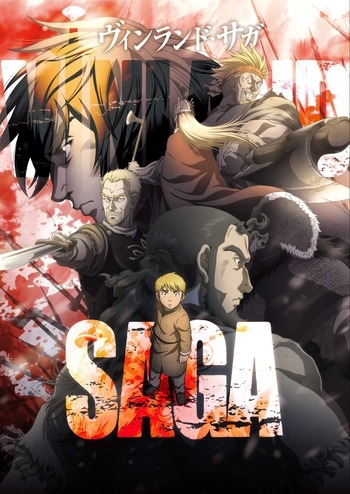 Both main characters suffer at a young age which leads to them walking upon a path of vengeance.

Both series have a similar production value & bring out emotions in the very same way.

Both shows have great storylines.Although AoT is more action packed than VS,in my opinion.The animation is great in both shows.Plus,both are made by wit studio,so you know it's going to be good.

Both shows have similar and amazing graphics.. both are super intense and bloody.. if you like one you'll just love the other!!

If you liked Berserk or Vinland Saga, you'd like the other because both have their stories set in the European middle ages. And they both have a protagonist who is on a quest seeking revenge.

These excellent anime series take place in the ancient world, featuring determined young men who must grow on the field of battle.

Set in historical times, these anime series are filled with bloody battles and ancient, old-world politics.

The murder of a parent - witnessed by their young child - leads to their offspring's quest for vengeance, seeking justice in a land torn apart by war and strife.

Very similar anime. If you enjoy one of these anime i recommend you go a check out Dororo or Vinland saga. I promise you its worth your time

Deep in the forest, Eren continues to hone his Titan abilities so that the military can reclaim Wall Maria. But soon, the Scouts find themselves persecuted for a crime they didn't commit, and Eren and Christa are thrust into the center of a political conspiracy that puts all of mankind at risk. Humans must fight against humans - not Titans - if they are to live another day, as all the while new secrets about the Titans emege...

plus if you liked this a lot I actually think the best recommendation for this is game of thrones. If you some how haven’t herd of it it’s not a anime but a tv show by HBO and trust me the first seasons are just hours upon hours of nail bitting moments like in the Larst episode in Vineland saga.      Just like anime wach the first 3 episode before choosing to watch it or not.  And if you want to Piirit this it just surch it up and go through the links just like how you found kissanime cuz I know you watched Vinland saga there.

Both anime follow a young protagonist with combat capabilities, Jormungand following a modern child soldier while Vinland Saga follows a teenage viking. The deuteragonists of both stories also have some similar character traits such as being cunning and in charge of a military force. Also it should be mentioned that the name Jormungand comes from a Norse mythology which many of the characters from Vinland Saga believe in.

Both anime are war oriented and have a similar feel in when it comes to the battle scenes, the determination in Shin and Thorfinn also overlaps