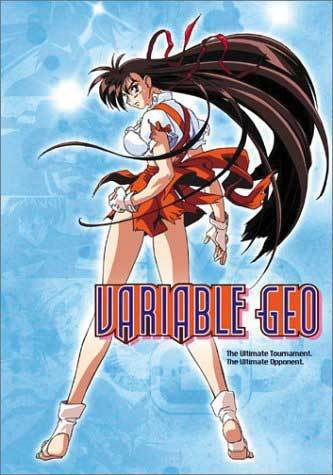 Looking for tournament style fighting anime?  if you saw one of these enjoyed it, but missed the other, boy do I have news for you.

I figure you enjoy one, you'll probably like both. Neo Geo having a bit more to do with just the ladies.Sf having a bit less of the actual ring side seats, but both have plenty of punches and kicks with the occasional super powered moves/blasts in both.

In the 21st century, most of Tokyo lies in ruins due to a massive earthquake. The cause of the disaster was Shizuru Ozaki – a man who obtained a large amount of power and subsequently went mad. Since the time of the cataclysm, various individuals have gained possession of items called 'Caizer Stones', which grant them superhuman abilities. Now, Shizuru Ozaki is on the verge of losing his sanity once again, and this time he might destroy the entire world! Can Gowcaizer and the rest of those imbued with Caizer abilities find the strength to stop Ozaki and save the human race?

In a world where Japan's security rests in the hands of super-powered samurai and their masters called "generals", Muneakira Yagyuu, the official swordsmanship tutor to the family of the shogun, arrives at Buou Academy in order to serve as head of the school's dojo. However, while he hopes this will be a routine assignment at an all-girl's school, everything changes when a strange girl falls from the sky with a power of a Master Samurai and no memory...