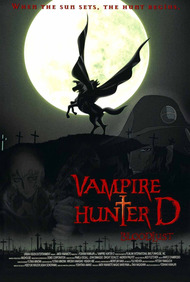 In the distant future, the world lies in ruin and vampires rule the land. Mercenary vampire hunters fight the terrible forces of darkness - for a price; the most notorious of them all being the half-vampire named D. However, despite his actions that help humanity, he finds himself shunned by those he would save. When a girl named Charlotte is kidnapped by the vampire Lord Meier, her father hires D to bring her back - dead or alive. Competing with the vampire hunting Marcus Brothers for the prize, D encounters Meier first; but in the middle of their confrontation, Charlotte calls out Meier's name in worry and Meier reveals that she is accompanying him of her own free will...

StoryThe same people who brought you brought us Ninja ScrollVampire Hunter D: Bloodlust a few years later - and it's obvious. On the plus side, this means visual delights abound; on the minus side, the movie is in essence a recycled idea. You'll get the same sort of pacing, same sort of structure to Ninja Scroll, just a darker tone and upgraded graphics. However, this doesn't destroy the overall entertainment value of the movie, because what it does, just like its predecessor, is to keep things simple and clean. It doesn't delve too deep - after all, the point is to rack up that death toll like nobody's business - but it provides just enough genuine surprises in the plot and a non-cliché ending to keep our brains as well as our adrenaline glands working. This is the show Devil May Cry so desperately tried and failed to be, with impossible stunts like bikes riding up the side of a wall, a vampire's cape deflecting massive shells, and kick-arse females in tight outfits. The movie packs enough into a short space of time so that, despite the very average movement of the plot, it never gets mind-numbing. Fast paced and with glorious set pieces, there really isn't much not to like - just not much to positively admire eitherAnimationYou can't tell this was made in 2000, because, almost a decade on, it still rivals most of the anime being churned out now. The colours are clear and crisp with plenty of detail to be found in shading and tones and, er, the gore - yes, definitely watch out for the gore. Movements outside of fights were as best as Bloodlust's era could allow, which meant it looked great even by today's standards. Whilst the action sequences were highly inventive, the primary use of cuts to give an impression of speed meant you didn't actually get to see characters move as such during fights. Instead, I would say the main visual treats were the stylish imagery and clever camera angles dotted throughout. For example, D silhouetted against the moon atop a hill is a gorgeous image; I wouldn't mind that as a wall scroll in the least. In terms of animation, Bloodlust is simply bold and beautiful.SoundI have only watched the English dub, and so far haven't felt need to switch to the Japanese (which is rare on my part). The American voice acting suffered from pacing issues here and there as per usual, and D sounded like Keanu Reeves on sleeping pills. Other than that, the voice actors did a decent job. Leila intrigued me the most with her husky tone and she probably had the best lines in the entire show; Meier Link - surprise, surprise! - had a seductive British voice. The soundtrack, with its high strings and low bass line and was always appropriately creepy, especially in the opening sequence where it helped set an excellent tone.CharactersNone of the characters, not even D are actually interesting or memorable. Leila Marcus has the skin-tight outfit and a very distinctive American voice going for her, Borgoff Marcus is just big and butch, Meier Link is a vampire with a cape and a posh accent, and, when it comes to blandness, D gives Neo from The Matrix a run for his money. Bloodlust's central character is a walking cape whose sole purpose in life is to do the ‘lone wolf' routine. So why did the characters still work? Because they suited the story to a tee. Just as with the plot, they were a means to an end, a way of giving the audience a slick show that entertained without shaking up our ideas of the world in any way. I presume the creators figured that too much character development would cost them the excellent pace they had established, and I am bound to agree. Characterisation was limited to making the cast feel sufficiently real, but it was easy to assume what drove most of them just by looking at them.OverallEverything in this movie is as good as it needs to be to make this film decent. Bloodlust is a must for action junkies and highly unlikely to disappoint those looking for a break from the usual brain food. Think of it as a short version of Claymore, only with a minimally-characterised cast and better looking fights. Not to mention that, with animation like that, Bloodlust is not going to age anytime soon.

Leaps and bounds ahead of its predecessor, 1985's Vampire Hunter D!  This sequel sees a bigger budget, better production, cleaner character designs, a grander musical score and superb animation and visual effects.  The plot is very action packed and keeps the viewer more than entertained, engrossed and attentive right through the entirety of its 1 hour 41 minute run.  One plot pitfall, however, is that of the attraction of Meier to Charlotte... or is it Charlotte who is attracted to Meier?  This matter is never resolved throughout the entirety of the film and we never learn exactly why or how this attraction exists in the first place.  A few other minor shortcomings of this film are its sound quality and character design.  While the movie's sound effects can be deafening, its spoken dialogue is undeniably muted in comparison.  Viewers watching this movie on a home system will most likely find themselves adjusting the volume many times throughout the movie's run.  And, while this rendition's characters are much more clean, polished and proportionate than the 1985 version, some of the characters, chiefly Meier and Charlotte, also suffer from the same flaws (disproportion and unattractiveness) as the previous incarnation.  All in all, Vampire Hunter D: Bloodlust is a must see for any Anime/Manga, vampire fans and comes highly recommended by this viewer. p.s. I LOVE the red and black color scheme of Carmilla's castle!

Story Pretty boring story, but you won’t notice. If you actually sit down to think about what goes on it isn't that good. You will not be paying attention to the story line though. It looks very good.    Animation Excellent, a visual feast. By far the best thing about this film. It feels very crisp and there are some really nice character designs. The action sequences are also handled very well.    Sound The music is very appropriate to the tone of the film, and adds to the atmosphere that the rest of the production is working towards. The dub is ok, its is not a translation so you do not get phrases which make no sense or there isn't too much lost in the way of cultural exchange either   Characters Full of stereotypes. The characters are all very thin and there is not much by the way of a surprise. Once the characters are introduced you immediately get a grasp of who they are what they are going to do or even say. The rest of the film is let down by its performance here.    Overall A decent watch. I would recommend this to any fan of the vampire/mild-horror genre. It is very good to look at and there is enough storyline to keeep you awake. Entertaining. 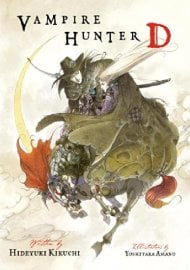 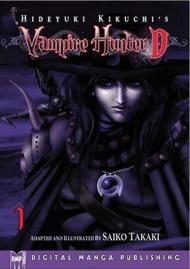