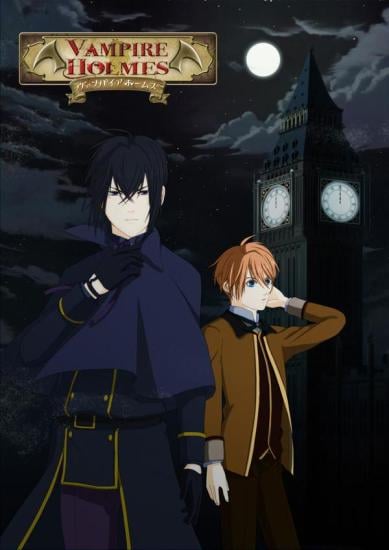 This is basically a commercial for the game. A 12 episode commercial with a little drama, a little comedy, and absolutely no vampires. Holmes might be a vampire, but that's not really in the anime.

Let's start with the story. Complex and riveting it is not, but what seem like random episodes do in fact come together at the end. It's kind of like watching an early M. Night Shamalamadingdong film, but without the half-way decent acting. So, pay attention to the little stuff that gets thrown in, it's actually important.

The animation is absolute trash. Most of the anime is still shots, chibi faces in speech bubbles, or stilted, repetitive movements. Obviously, the studio didn't have much of a budget for animation. The animation would look better on a flash game.

The opening/ending is the same song, is bubblegum pop, and doesn't fit with the anime at all. What about Holmes and Hudson's whacky adventures screams "everlasting love"?

There are really only 2 characters, Holmes and Hudson, and they'd be great NPCs for a game. No depth, just give you the information you need to complete a task. Honestly, the white/black cat was a more interesting character.

Oh, and did I mention the add for the app-game that preceded almost every episode? They really want you to play Vampire Holmes...

The Vampire Holmes anime is a pretty obvious advertisement, and it's not even that good of an advertisement. Made to promote a mystery smartphone game developed by Cucuri for iOS and Android devices, the plot follows Detective Holmes, and his assistant Hudson, as both of them solve a case given to them by the Metropolitan Police of London.

While the plot is basic, it is enough to get a mystery mobile game rolling. And you'd think that a short anime used to advertise said mobile game, it could lead into the games plot as some sort of prelude, or maybe be an adaptation of a small part of the plot from right at the beginning, but it isn't.

In the anime, Holmes is given a case to solve, but we don't see him solve any of it. Oh, he does solve the case that was given to him, you just don't see any of the actual detective work, with the anime instead focusing on all of the in between bits that you wouldn't want to actually see. This was probably done because of extreme budget and time constraints, but it makes the entire series frustrating to sit through. Which you wouldn't think is a problem with how short the whole thing is.

Each episode is only 3 minutes, and with 12 episodes, that's a total of 36 minutes to work with. While not a lot of time, it could have been used to solve a smaller case. Or tease the plot of the game like i mentioned earlier. But instead, the whole series is Holmes and Hudson spending most of their time not solving the case and arguing about not solving the case.

The whole plot gets solved off screen. What we get instead is slapstick involving a loud and annoying landlady who continually hassles Holmes for rent, and Holmes's pet, a mysterious cat named Kira, who is more than it seems, and not much else.

The worst thing about it's measly 3 minute time limit is that a significant chunk of each episode is the opening and closing credits. So the series went from having about 36 minutes of time to work with, to less than 15. Did a series like this need an OP and ED around the same length as a regular series?

The Vampire Holmes anime isn't really worth watching, unless you need something quick and easy to digest during a lunch break. And even then, there are quite a few other anime that you could watch instead of this, such as Detroit Metal City, Inferno Cop, and the Lucky Star spin-off Miyakawa-ke no Kuufuku. Even the McDonald's advertising campaign (the Join The Crew campaign), about the girl who becomes the boss of her own McDonalds, is a step up from this.

Maybe if you speak Japanese fluently, or even read Japanese really well, you could probably go check out the game instead. At least you'll be solving a mystery.

Haha. I'm really glad to find this garbage 😅 Vampire Holmes would have been a really nice work if it just improved its animation art and story plot. Other, music and sound were really awesome!

Another... I started to like this anime because of its comedy... but, unfortunately, it depressed and displeased me a lot. A lot. I swear. Why the heck does romance had to intrude? WHY DID HOLMES HAVE A FEMALE LOVE INTEREST?!! 😭

Damn it... after that knowing, it started to suck for me. But all in all, really, this anime wasn't as bad as people made it. Though the plot, animation were crappy, it still had comedy. The heart of anime. Nice work except for that stupid romance.

Vampire Holmes is a very random anime, which can be good. There are good, funny, random anime's like Bobobo or Strange+.. but the problem is, Vampire Holmes's kind of random is so random, that I just don't even know what's going on... It's just like, "Huh? What? Huh?"...

The anime refuses to make much sense; there is however a two part from episodes 6-7.. Which I thought was surprising.

I think the animation is good, apparently everyone hates it, but I have no problem with it.. and the ending scene for each episode has this beautifully done background of the galaxy, which I think is so pretty!

The sound is fine they have this cool song called "Everlasting Love", which I wish was longer.. because it's actually pretty good.

The characters I find are likeable, except they aren't very fleshed out due to it being so short! I would love to see what they could actually do with the characters, but no such luck!

The main focus, I find is they made this to advertise their game of the same name... I checked it up on the app store and the reviews for the game are actually good.. (Despite it only being two reviews, don't judge me.)

My verdict is, I've seen anime's that bored me to death, this anime is not one of them.. Vampire Homes is just "whatever" to me, so  I don't mind it.. but I'm not "OMG THIS IS tHE MOST AMAZiNG THANG EVAR!!" Either.

Also, I'll be posting this review on my blog, "Hotspots Portal", just in case anyone stumbles upon it...

This anime is... strange.

After the first episode I was absolutely confused as to what I had just witnessed, but the length of the anime made my decide it was worth a shot anyway. By the end of the second I was just laughing like mad wondering what I was doing with my life watching this show.

The story rating isn't because of a bad story. It's because I'm genuinely not sure what the story is even supposed to be.

The animation is pretty horrible. It has a few scenes where it looks nice, and those really do. But the majority of it is either completely stationary, or chibi.

Personally I'm a big fan of the theme tune, it's catchy as hell! And while the voice acting isn't the best, it's also not the worst I've seen. You can only polish a turd so far and I believe the actors have done a reasonable job.

Overall, I feel this anime has slipped into the "so bad it's actually good" category. As long as you don't go into it expecting anything. After reading reviews I was expecting it to be probably the worst anime I've ever watched (I have watched a relatively small amount of titles compared to many.) I was not disappointed. But by episode 3 or 4 I was just laughing at how ridiculous the entire thing is.