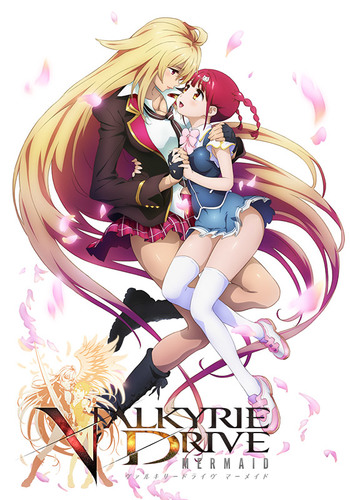 You would crush their hopes and dreams.

Moving on - Yes. There are some rather graphic scenes in the first few episodes. Yes. These are extremely sexualised. Yes. They do tone it down considerably as the series goes on.

After around ep 3 the story become more about the plot and the character development than it does about the lebian sex scenes. In fact by the end of the series the only thing needed to achieve 'drive' is a no tongues kiss.

That being said the plot such as it is, seems reletively weak. Which is a shame because this could have been way more interesting than it was. Still it's a good concept and it is quite well executed. There are some points where I would have liked greater explanantions, however, for what the anime is, it doesn't do too badly.

The animation was very nice, extremely clean the whole way through. The soundtrack, well, there isn't much of one but the OP and ED were adorable. Voice acting was pretty spot on too.

Some of the characters were better thought out than others, which was a disappointment. The two main characters were a bit of a let down. The support cast seemed to have more distinct personalities than than Mamori and Mirei. There are quite a lot of tropes in evidence here.

Overall, this is good to kill time, but it isn't an amazing watch by any stretch of the imagination. However, if you take it for what it is (and it's quite honest about not being anything more than that) then you should be able to sit through it for the experience.

Just...remember to lock the door if you house share or live with family...

I wanted to like it. I really did. I'm aslut for a good story and this one seemed like it would foot the bill. It has a great premise, a great idea. However, there it falls flat. Getting to the story past all of the sex scenes is tiresome. If you want something to watch late at night to bust out your knuckle babies or to work up the waterworks here you go. If you're looking for a story that's based on a new idea, look elsewhere. Add in the harem factor, not jsut yuri but you've got the one lone male of the island, and it's the usual tropes that's driveled out to make money. I tried, I really tried to like the show, hell I WANT to like it. I want to watch and see where the story goes. But meh I've no real reason to give a ****. I'm sorry for it.
That said, enjoy your alone time with the porn.

Its actually pretty simple, this anime.

3. There isnt much to it so it works perfect to have in the background

4. Its stupid and idiotic and probably fun to laugh at how bad it is (or fap)

1. Censored version is basically you watching a white screen (the white beam of censorship)

3. Its stupid and idiotic and will probably make you mad at some of the characters

It's really underrated anime! People hate it because there's too much ecchi stuff (for them). But, in fact, story and character design are pretty good! It's interesting, sometimes funny and heroins are really good looking, especially when they are entering the drive, hy hy. Animation is at high level too, and I fell in love with music here, especially with ending! I wish there will be second season of "Valkyrie Drive", it will be real hit!