UzaMaid! - My Maid Is Still Seriously Way Too Annoying... - Reviews 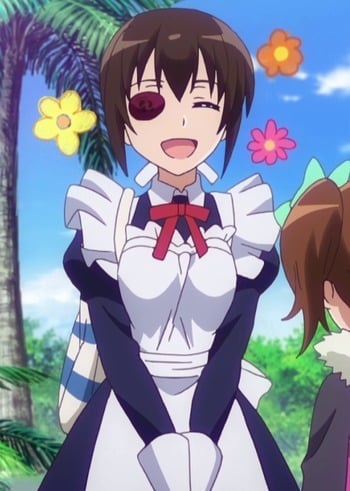 Do you want an anime special based on a show about an adult maid who is probably just one bad day away from being on a sex offender list? Do you want to watch a show that might put you on one? If so, then this is the anime for you!

Story: This is two short stories about a adulkt female maid, and her assistant, watching over a 5 year old (ish) and just straight up talking about wanting to marry the little girl and have kids with her. The first short involves hotsprings, and the second involves the little girl trying to be a maid. Both made me feel like Chris Hansen was going to be knocking on my door at any minute.

Animation: The animation was actually pretty good, its definitely way better then this thing deserved.

Sound: The background music was ok, and the voice actors would totally work in a show that isn't so horrifying.

Characters: The head maid is basically a wannabe pedophile. I know this Lolicon thing is something that just happens in Japan, but I at least expected shows like that to pull the old "Well, she's actually a 5,000 year old dragon who just looks like a girl" thing. This is just straight up a lusty, muscular maid wanting to do horrible things. The little girl was...ok, I guess. Honestly, I was pretty distracted by the freaky maid and the co/assistant maid being horrible.

Overall: Anime was a mistake.