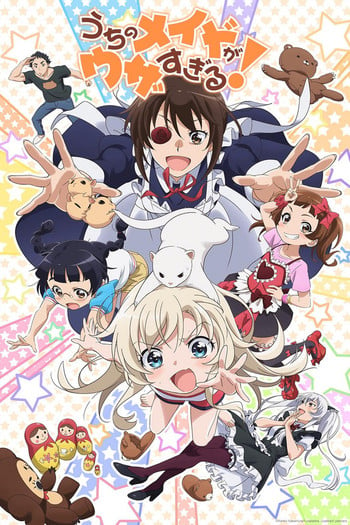 Misha is an elementary school girl who lives with her father, having lost her mother at a young age. A new maid has joined their household, and on top of being an unusually muscular woman, she also has an excessive love for young girls!

Our Maid Is Too Annoying!

My Maid Kidnapped Me

My Maid Is Sneaking Up On Me

My Maid Is Everywhere

Our Maid's Girl From The Past?

My Former Maid Is From A Good Family

My Maid And The Day We Met

My Maid And Yasuhiro

My Maid And The Forbidden Room

My Maid Now And Forever

NO SPOILER  I enjoyed this anime a lot, it's funny and i could watch many episodes in a row without getting bored. It's a light comedy but the last 2 episodes are deeper making the anime more meaningful without losing the funny side of a comedy. I recommend this anime especially if you like loli/lolicon genre.

„Our housemaid is so annoying!“ is a comedy about yuri lolicon woman and the target of her affections, a little Russian blond girl, who lives alone with her stepfather, after her mother died. However, is it funny? Yes, it has its funny moments underlined by necessity of constant vigilance on the girl part against advances of the maid to cuddle or even to propose marriage. Let’s just call the police. The series is somewhat self-aware and makes that “I’m calling the police” jokes from time to time. There is also the fact, that the maid is quite muscular ex-millitary, which makes things even more ludicrous. I would say the series tries to go for over the top in regards to comedy. Luckily the anime has only 12 episodes so it ends at the right spot, before it gets too repetitive. It uses usual tropes to increase longevity of comedy by adding side characters be it classmates of the girl or crazy former colleague of the maid. Overall the character pool is very small. It tries to even establish some kind of main story, especially towards the end, even if it is painstakingly obvious nothing is going to change in the end. If you really want to go with the OP theme look for live video clip, where the part of the maid is played by Reika Saiki, female professional body builder. It’s something you don’t see so much often. It’s something you can’t unsee either. Anyway both opening and ending is ok. I would recommend the series for anyone, who wants change of pace from usual shows for some fun and doesn’t mind yuri undertones in the series. Overall the series is ok. It has little of lasting value, therefore I would consider this as one time watch. 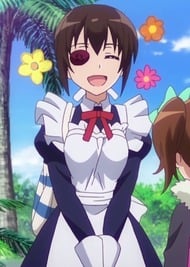 UzaMaid! - My Maid Is Still Seriously Way Too Annoying... 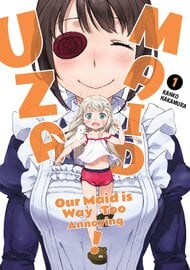