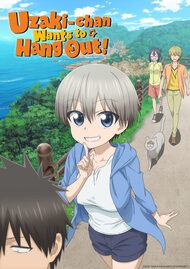 To Uzaki Hana, nothing sounds worse than being alone. That’s why she’s made it her mission to keep her upperclassman Sakurai Shinichi company. The problem is, all he wants is some peace and quiet!

This review is based on Uzaki-chan's first episode, simply because I have dropped the anime and I probably won't watch the rest until it's complete."Uzaki-chan wa Asobitai" or "Uzaki-chan Wants to Hang Out" is a fanservice-y dumpster fire.This opinion is based on slice of life anime as a whole, where the first episode is USUALLY what you should expect from the rest of the series.Story: 2This anime simply doesn't HAVE a story. It just follows a loli with large tits who annoys the MC, which I will talk about later. If this is a story to you, I must tell you, good sir/lady, watch something like Death Note, Dragon Ball, or even Naruto for some good story. Animation: 8I can't exactly diss the animation of this, because the norm is very good in today's day and age. If this was animated like anime from the 90's, we'd just be R U N N I N G I N T H E 9 0 ' S ! But seriously, the animation of the characters is very simple and normal for this type of anime, as well as the setting animation. I feel like the animation is really the only good part of the show.Sound: 5The sound design is OK. The opening I actually don't mind. It sounds very similar to the type of songs like "Motteke! Sailor Fuku!", which I personally don't mind. (Dude, the Lucky Star OP is a vibe prove me wrong)The background songs go unnoticed for me, partially because I'm trying to watch the anime rather than listen to sound. The other reason is they're just not very "catchy" or "vibey", like the Persona 4 OST.Characters: 3Uzaki is just, like I said before, an annoying loli with large tits. Nothing more, nothing less. For her name, it works. (I'm not a Japanese speaker but Joey or The Anime Man, who is, said this on the Trash Taste Podcast) Her name is a play on "uzai" which means annoying. But if you don't like Uzaki, you won't enjoy this. (me included.)Sakurai is just a copypasta anime protag. Again, nothing more, nothing less. He does nothing, which honestly, I don't even mind. If he was like Ayanokoji from Classroom of the Elite, where he had a persona he put on but secretly was the opposite of what he put on.Overall: 4.5If you don't like Uzaki as a character, you won't like this show. If you want to watch this for the ecchi, watch AkiSora. If you want hentai, watch Itadaki Seieki, Shion if you like tentacles, or something like JK Bitch ni Shiboraretai. Characters are boring, sound is mediocre, animation is pretty good but in today's day and age, nothing special.Final notes:If you want to waste time, watch this show.If you want a good anime, don't watch this, watch something like Death Parade, Death Note or Tokyo Ghoul if you're getting into anime.This anime is really only for horny-on-main teens and degens. I quite literally watched it to see how boring it was.

Uzaki-Chan Wants to Hang Out! is your typical run of the mill Slice of Life college romcom. I've known Uzaki-chan since last year reading the manga and I'd say the anime does well in adapting the manga loyaly. The selling point of the story and the biggest laughs to me come from the comical relationship between the main character and Uzaki, the girl you either love or hate, sadly I'm the latter.  I'm a big lover of lame slice of lifes and ecchis but this anime didn't give me much satisfaction on either. Unless the the couple pick a fight with each other the episodes tend to rely on cliches, they drag and feel boring. The ecchi and fanservice are generic, too little or to played safe for my perverted tastes. Character animations are servicable while background arts are either weak or borrowed live shots. If you really love Uzaki this anime is for you. If you can't stand her, there's nothing special to watch here. An Okay-ish anime at best

Shinichi is a simple guy and just wants to do things on his own but Hana is a little troublemaker who simply can't leave Shinichi alone. As much as Shinichi complaints about Hana, he does start to appreciate her more. As the series progresses, we do learn more about how their relationship came what it is. I guess the main focus of the show is to explore the relationship between Shinichi and Hana. How long will it take before they start confessing to each other? There is some funny banter between the characters with quite a few cool moments but there is also a fair bit of screaming and quite awkward moments that turn the show into a mediocre experience. 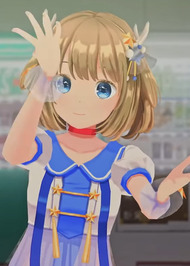 Uzaki-chan Wants to Hang Out! W 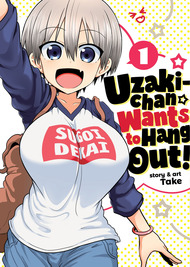