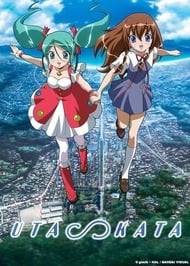 On the day before summer vacation, Ichika discovered an old mirror in an old school building. From within it, the mysterious Manatsu looked out and offered to trade favors: if Ichika will do her "homework" (experience the power of the spiritual life forces and write about her feelings) then she will return the charm that Ichika has lost. As Ichika struggles to absorb the raw power of nature, those who watch from the other side of the mirror eagerly await her decision at the end of trials. Can a 14 year old take on the sins of the world and mend the rifts between nature and humanity?

Uta Kata is an interesting idea for a story that did the mistake of becoming a series instead of a movie. The basic concept is extremely captivating but stretching it to last for 12 episodes, most of which are aimless slice of life, ends up killing all the excitement. To put it very simply, the story is about some girl getting powers from some other girl and spends each episode trying to help those around her with magic. The catch is, most of the times she ends up creating more harm than aid, and thus there is a very dark side to her otherwise supernatural gift. Now let me make a list of the interesting points of this premise:- Yuri innuendos between lolis; run now and watch it you sleazy viewers! Yuri never fails. - A different magical transformation on each episode. That’s right, if you are bored with the same repeated clips and attacks of mahou shojo, then this is interesting for having a different uniform and a different elemental power on each episode. - Dark and depressing side to an otherwise cheery genre. It goes against the norm of such shows and presents how even magic can have its toll and negative side.- WTF ending trying to make everything bigger than life itself. Because it’s anime and can do this stuff.In theory the above elements would be enough to have ourselves a winner. And it is true; when it first aired it had some interesting reactions from several viewers, especially female shojo fans and male Yuri fans. Unfortunately the feeling went away pretty fast because as I said it was a nice idea stretched to last too much and to the most part nothing happened. So if I am to add the negative side to the above strong points I mentioned, we get these results:- There are lots of Yuri themed anime and this is amongst the weakest ones because of the simplicity of its characters and the blunt plot which makes it easily replaced with a dozen other better directed shows.- Having different uniforms on each episode is a minor detail that in the longrun does not help much in keeping you interested. Cardcaptor Sakura for example did the same and it was a lot more moe to the point it mattered. Also there is Fairy Tale where a female warrior named Erza does the exact same thing and it is a lot fancier than just a few minutes of some simplistic magic we will never see again. - Dark themed mahou shojo are uncommon but there have definitely been better examples. The older Princess Tutu and the newer Madoka Magica are famous examples which simply overshadow in context and presentation the simplicity and dullness of Uta Kata.- Nobody does it better than Gainax when it comes to WTF endings and this is definitely nothing much before those. So individually Uta Kata may seem interesting and special but in closer examination and comparison with anything else that came around it ends up being way too simple and boring. The character dynamics are weak, their design is generic, and the premise does not really deserve a whole series to be told. Backed up by unimpressive artwork and soundtrack is the final straw to tell you DON’T LIKE THIS SHOW. So I am just going to say go watch Princess Tutu or Madoka Magica (although I dislike Madoka) instead of this since it is completely obsolete before them. 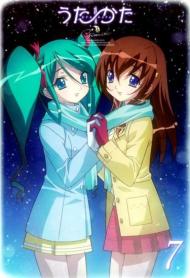 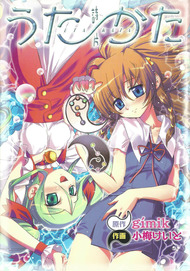