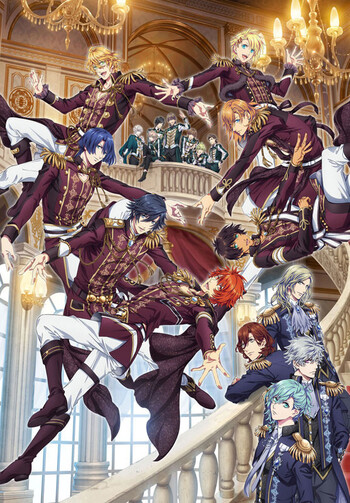 If you're a fan of Utapri, chances are you'll love this movie!

I attended 4 screenings and what I can say it is definetly the kind of movie you would want to watch with an audience.

In this movie, you are in the place of the fans cheering their idols on! So if you're in a theatre where people are cheering and waving their penlights it is very exciting as the movie was made for this, it's to be treated as a live show/live veiwing. After reading another review of the movie from a pretty empty theatre, I can say without it can change how someone views the movie entirely.

The songs in the movie are shortened versions. I would have loved for the full versions to be used, but I can understand the decision made to use 'live versions' and still enjoyed it a lot.

In the end, believe this movie is more enjoyable from the experience had from it than for story as it does seem to not have connections to the anime series, which would make sense since fans in the audience wouldn't know about much of the idol's personal lives like the anime focuses on.

For story, I give a 7 since it's not something that important to the rest of the plot but still enjoyable because you still learn a bit more of all the characters. (Especially HEAVENS!)

The CG animation was absolutely beautiful and I would give it a 10/10. Many of the members had different dancing animations in this movie unlike previous CGs that seemed to be copied and pasted moements. I dont know what to say for people who dislike CG animation used in anime since I don't mind it at all (unless it actually looks animated pretty badly)

Sound? Well the music was beautiful, the surround sound in the theatres made it even better! You can also hear the prerecorded cheers of the audience in the movie come from behind or to the sides of you! I give it a 10/10 to

The characters, they're all so lovable in their own ways! (Well, maybe unless you can't forgive some of them for something they did before.) I give a 10/10 because I think they really did a good job at fleshing out the characters more through the MC portion of the movie. The way I view Yamato after seeing this definetly changed after watching it!

Edit: I have now seen the encore scene after the credits! There are 4 different encore versions, the first three have messages from STARISH, Quartet Night, and HEAVENS. The last one is called "All Star" version, which has all 3 idol groups with a message to the veiwers. In all honesty, I was in tears watching them.