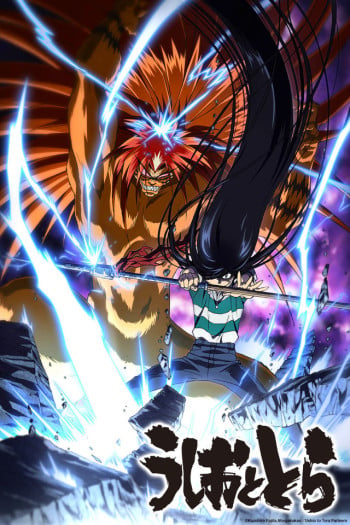 Dragonball has a new series, Sailor Moon has been revived and JoJo is no-longer an OAV, I think I smacked my head on a time machine and woke up in the 90s.  Here comes another very simple straight forward shonen from that era.

Set up is easy; Tiger looking demon, kid who grows long hair and carries a long sacred spear. Each episode so far has our protagonist fighting a demon. We know what is going to happen you won't need Cliff’s Notes or Wikipedia to fill you in on subtle deep meanings. No, you will be able to follow the numbers like a paint by colors booklet.

But there in-lies the charm of the title. It is why you buy a paint by numbers book, you are looking for mindless fun. It will have some action and comical moments. Some are brought to you by Ushio and his serious yet goofy nature. He is great at sports, but actually loves art. He is best friends with two if the cute girls at school, but mostly it is platonic. Also, he is constantly hit by one of the two girls who gets mad at Ushio, but in the same way a 8 year old boy pulls a girl he likes pig tails.  And there is an on-going comic bit between Ushio and Tora that devolves into verbal and physical sparing. (Which is kind of fun, especially the part where Tora mentions he wants to devour Ushio.) The action is almost all in the form of the supernatural, and will most likely require Tora and Ushio to work together at times.

The plot is simple so far, murder a bunch of monsters that are drawn in by the evil aura that Tora has been building up over his incarceration. And Ushio is a school age kid with a cute blond and a brunet who seem to be his closest friends. I assume it will become more than just this for the future and I hope it stays true to the 80/90’s homage to the feel of the shonen love fest.

Speaking of which. The animation is modern, yet borrows the look from the past. It has an old school feel, with things like the sketchy lines on our main protagonist, and simple easy to recognize designs for the rest of the cast. Movement is smooth and backgrounds are OK.

The Sound was solid, and the opening rocks a bit. But the best part of the sound was the voice of our Tiger looking demon. He can turn on the evil rumbly crass voice then switch it over to the humble, meek and shocked voice when he wants. Watch the first banter with him and Ushio and you can tell the voice actor will bring some joy to the part.

So, if you should want to see the Calvin and Hobbes version of a Anime/demon hunter/Shonen world, and might want another title to walk down memory lane with, you can’t go too wrong with giving this a try.

this is truely an amazing anime. i was very surprised at how well put together this was from such an old manga. it truely manages to capture the essence of everything that made 90s shonen fighters such a blast to watch and read.

This is a story that comes out of the 90's with avengence. It follows many of the old shonen genre shows and will leave you wanting to watch the next episode every time. That being said, it is a bit short and feels a touch rushed compared to other shows of its type but at least it still managed to get 26 episodes. I would say it's a must for anyone who is a fan of the 90's and looking for some nostalgia.

Feels like 1 to 1 adaption, doesn't take full advantage of being an animation, pacing is pretty bad and a lot of events happen off screen.

Thoughts: Story is ok but strays a lot, Animation is good, Sound is ok but is plain missing at times and Characters are average but sometimes annoying and stupid.

STORY We know the drill - your normal high school boy gets absorbed in a dangerous adventure against his will and grows to accept it. The plot follows Ushio as he fends off monsters, rival Beast Spear candidates, and avoids being eaten by the yokai he freed from his shed basement... Tora. There's pretty much constant fighting going on even as you get into some of the backstory behind the spear, which I actually quite liked.

CHARACTERS Aight this is simple: Count on Ushio to be ridiculously selfless and always be there to keep girls from crying. Tora is a tsundere with hella thick thighs, end of story. Besides this we got two side high school chicks who at least get progressively less helpless?

OVERALL I was never bored and honestly think all the fights were varied enough in kind (be it yokai or diabolic scientists) and risk level (from 1 hit to 1000 hit kos) for me to keep engaged all 26 episodes. Indeed it really didn't need to be 26 eps, but the side stories they threw in there did help pace out the major developments a bit as well as show Ushio's development with the spear. At the end of it all, it left me eager to start season 2 which says a lot for a show.