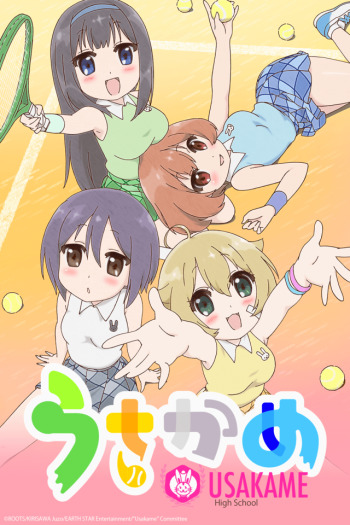 Usakame is a spin-off of Teekyu where the story follows the 4 main character’s rivals rather than the main characters. Its based off a comedy manga and due to the success of Teekyu (84 episode anime), Usakame was given the green light to be an anime as well. While I haven’t seen Teekyu personally, I have heard that it is extremely similar in not only its short run time, but the fact that each have 4 characters and are a tennis comedy that follow 4 girls.

STORY: It’s a comedy that follow 4 girls who are in the same tennis group in school. This specifically follows the rivals. While tennis is what they all have in common, they very rarely ever play tennis. It mostly focuses on misconceptions and funny situations that the group of girls experience. Its ends up being ok, but not as good as Teekyu.

ANIMATION: It’s a little weird. The art is unique almost like it comes right out of a children’s story book. Which makes for disappointing visuals due to the massive amounts of stills and extremely over simplistic backgrounds. Its disappointing due to the fact that everything looks like it was drawn in an hour.

CHARACTERS: No development, but that’s not why you’re watching it. No one really stands out.

OVERALL: I give it a 5.5 (bottom 35%). It’s only 40 minutes so I wouldn’t blame you if you watched it, especially if you like Teekyu (so you can get more of you fix). There are better shorts that came out recently such as Ojisan and Marshmallow that I would watch first.