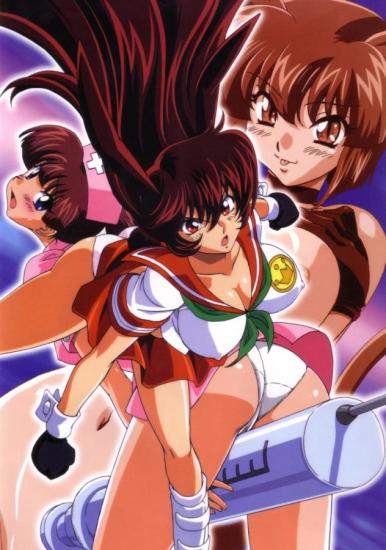 This is a short ecchi OVA about a bunny girl named Mimika who just happens to fall into a harem situation with our main character Haru. Theres nudity and fanservice galore and also a few fights here and there.

Story- So the story starts off with Inaba, a rough delinquent girl who happens to be fighting on the roof (yes he have some very smart characters here), while she manages to defeat her opponent she falls off the roof in order to save this rabbit and somehow ends up "merging" with it... yeah this is never properly explained. So now Inaba shares her body with the rabbit called Mimika and her Inaba personality only comes out for fights. She ends up trying to seduce the main character Haru while trying to fend off his childhood friend Miku, who ofcourse also wants to jump his bones. They end up battling Inaba's former rivals along the way and it ends in a somewhat satisfying yet also open-ended conclusion

Animation- I didn't find the animation in this OVA to be particularly spectacular. I enjoyed it more than most modern anime because of the oldschool drawing style, but for that time I have to say the art was fairly average.

Sound- The opening and ending themes were fairly decent for their time, but I don't remember any of the BGM. The voice-acting also felt a little off, like they could have been trying harder.

Characters- Nothing stood out much about these characters, the main char is your average harem lead. The childhood friend is shallow as well as Mimika. Inaba was somewhat interesting, but she only seems to get screen time when shes kicking ass. Theres also some interesting villains near the end and I found the one that kept upgrading his robot armor to be pretty cool.

Overall- Better than most modern day ecchi anime, but still pretty awful. If anything I can atleast say that it was an interesting premise.