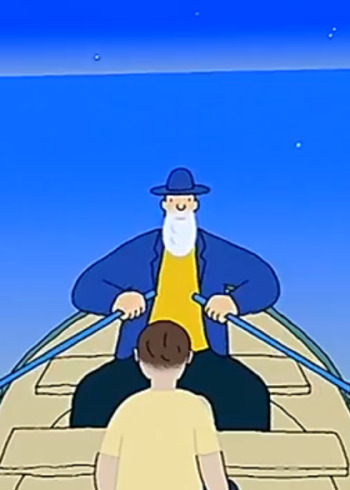 In a small observatory on a tranquil sea, a boy and his grandfather live in peace, fishing and looking at the stars. That is, until one day, the boy discovers that an extra star has been added to the Ursa Minor constellation, changing its form from a bear to a fish. Now, with the evil beast ravaging the stars and destroying anything it touches, the duo must set sail to find a weapon of immense power capable of vanquishing the fierce creature of the sea and restoring Ursa Minor back to its original form…

StoryAt twenty-something minutes in length, it usually is difficult for one episode OVAs to have a decent storyline. Luckily, in Ursa Minor Blue’s case, I was pleasantly surprised. A young boy and his grandfather live in an island observatory, secluded, in the middle of a vast sea. The setup reminded me quite a bit of the Myst novels, to be honest. One night, during his ritual star observing, the boy discovers that the Ursa Minor (bear) constellation has what appears to be a new star. He shows it to his grandfather, who recognizes the mysterious urgency of the situation and takes him on a voyage. The constellation had changed from a bear to a fish, who began terrorizing the stars and destroying things. The boy may be the key to stopping the fish, and only a powerful weapon can help him! Though it sounds like Ursa Minor Blue is an action-packed adventure, it’s anything but that. The story moves slowly, showing us idyllic scenery while traveling in an oar-driven rowboat. There is little dialogue, and the focus definitely is on the visuals, not the story. Regardless, this is one of the most unique stories I’ve seen in anime, and that’s a huge plus. In only twenty minutes this calm tale had a beginning, a confrontation, and a good ending to boot. Rarely can I say this happens or is executed well, but Ursa Minor Blue is a clear winner with such a good developed story in such a small timeframe. Even so, this probably isn’t something you’d enjoy unless you like slower-paced anime. AnimationWhen I first started watching Ursa Minor Blue, I wasn’t impressed with the animation. Saying it’s simple is the understatement of the year. At first, I thought of that as a bad thing... but after awhile, I realized that the simplicity is what gives Ursa Minor Blue its charm. The character designs can best be described as looking like they came from the Snowman. Anyone remember that from your childhood? Faces are nothing more than dots and lines, with very oval and round heads and simple shapes making up the bodies. All of the scenery is incredibly simple but still manages to be beautiful. In general, the water-centric world reminded me a lot of Zelda: Wind Waker. One scene in particular is a perfect representation of the simple beauty: the evil fish is jumping out of the water, in the black of night. The entire scene is black, with white lines showing where the waves are. The white outline of the fish emerges from the water, with two glowing yellow eyes. I could have drawn that scene; there wasn’t any sort of depth or amazing visual effects to it, yet it still ended up being remarkably effective. Watching this has shown me that you don’t necessarily need something to have rich layers, have 57 colors in one scene and include CGI. Sometimes, things can be beautiful with only a few colors and basic simplicity. SoundAt first, just like the animation, Ursa Minor Blue’s music seems a little too simplistic; but once it starts to grow on you, you realize how appropriate it is. In general, the music is made up of very simple melodies that seemed fitting in a nighttime RPG scene. Very calm, light and floaty ballads. There’s little dialogue, but the voice actors fit well for the tiny bit there is. CharactersGenerally I have a hard time rating the characters in something this short, but in this case, it’s easy. Though there is little dialogue and a slow-moving plot, Ursa Minor Blue still manages to have a rich set of characters. Not because they do anything overly exciting, but because of how innocent and simple they are. The boy and his grandfather are quiet and filled with purpose. The beings that are helping to force the powerful spear are perfect depictions of earthly automatons. The fish itself is a fierce killer. Even the trees themselves are alive and filled with hope. In general, a rich set of characters that helps make the story interesting. OverallThough only twenty-something minutes in length, Ursa Minor Blue still manages to be a delightful thing to watch. Its slow pace might turn some viewers off, but for anyone who likes artistic anime with a light and interesting story, this is definitely something you’d enjoy. I’m glad that I didn’t go with my initial concerns (that it would be too simple in every way) and kept watching, because I really ended up enjoying this. Ursa Minor Blue is unique and charming; check it out!

I'm not impressed with this at all. The story is excessively simple and so are the characters. Like a story you could tell a three year old child - and it has nothing to do with the fact that it lasts only twenty minutes or so, because truly beautiful things can be created in twenty minutes. As a matter of fact, the plot is consistent and the world in which it is set - even if though just hinted at - is imaginative. The animation and character designs are extremely simple, too. But after a couple of minutes of watching, I realised that it's the animation with the music and slow pacing that all together create a very distinct atmosphere - which is the only thing I appreciated: it has a kind of dreamy, calm and tranquil quality that very nearly managed to draw me in. If there had been a more compelling story or more captivating characters my enjoyment of this ova - as well as my rating - would have gone up. But as it is, it's really not enough: what is lacking, in my opinion, simply outweighs the intriguing atmosphere I mentioned before.

I enjoyed this a great deal, although saying I'm thrilled would describe the anime wrongly. It's basically a calm, unbridled look into the fantasy of the writer. The story is something with the creativity of a child, while not being overly childish. The animation, quality wise, is quite bad. Everything lacks in detail and shades or often left out. However, the animation style is different from the norm and more alike to some of the old cartoons or picture-books out there, giving it a charm of its own. The music is reserved, but fitting when used, giving off a calm, magical atmosphere. Sound effects, a section usually overlooked for being bland, are noticeably well done and added to the experience. The voice acting is done well. Basically, for those not afraid to sacrifice a bit of animation-quality for a creative story and quality sound effects, URSA minor BLUE is definitely worth checking out.