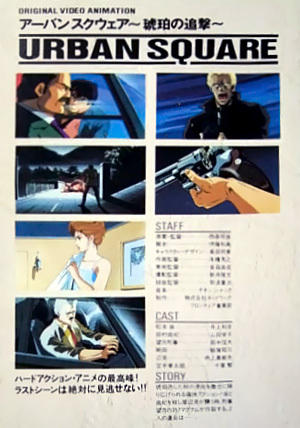 Based on a story by Kazunori Ito (the scriptwriter for Ghost in the Shell & Patlabor movies), Urban Square: Chasing Amber is a very unusual OVA as it may be perceived in two different ways, and the way you choose pretty much determines whether you'll like it or not.STORYEssentially, it's a classic detective story where the main character witnesses a murder and gets into trouble with the mafia; eventually, he ends up an action hero, fighting the criminals and protecting the girl he likes. Not only the plot is rather simple in general, but it also contains quite a lot of cliches typical for this kind of stories.However, if you look at the story from a different angle, all those cliches were initially supposed to be there. You see, the main character is a scriptwriter who factually ends up a protagonist of his screenplays, and that makes the OVA a witty parody on detective stories which may be shortly described as "B-movie coming to real life". Although the show never openly admits its parody nature it gives plenty of hints throughout the story: for example, when the protagonist and his future girlfriend meet for the second time, she wonders how two complete strangers have met twice in two consecutive days, and he replies: "That's why fiction can't win against reality. In reality, coincidences are allowed, but in fiction, coincidences are ridiculed". By doing that, the anime elegantly mocks its own narrative and performs the parody in a more subtle & intelligent way than many other shows of this kind.So, the story is good and well-written for what it is, providing an enjoyable watch if you keep in mind its actual purpose and don't take it too seriously.ANIMATIONThe OVA clearly reveals its age: not only it features classic 80's character designs but also some minor age issues here and there. On the other hand, the animation displays very nice fluency of motion that makes the action quite enjoyable; also, the movie is depicted in eye-appealing dark blue tones that add a subtle noir feeling to the show. So, the OVA looks pretty good despite some age imperfections it has. SOUNDTRACKPerformed by a band called Chickenshack, the soundtrack is an elegant jazz mix of piano, sax, drums, funky guitar and slap bass. In general, the OST is unmemorable because it doesn't contain any songs or even a main theme; yet it suits the OVA extremely well as background music. The voice-acting and sound effects (gunshots, explosions etc.) are also well-done and fitting.CHARACTERSThe characters have simple personalities, and some of them are straightforward action/mystery movie stereotypes, so don't expect much depth or development here. However, it doesn't become a serious problem because they were supposed to be like that anyway (it's a parody, remember?), and thus they're still fine for this kind of show. Besides, the protagonist, his girlfriend and the detective who helps them are all quite likeable. OVERALLIf you want a witty parody on mysteries or just some quick 80's fun with good visuals & soundtrack, this OVA will be a nice choice for you.However, if you need a clever & intricate detective story, this show is a wrong place to look for it. Perhaps, you should try something like Ghost in the Shell: Stand Alone Complex or the first Patlabor movie, as those two feature the best detective plots I've seen in any anime.