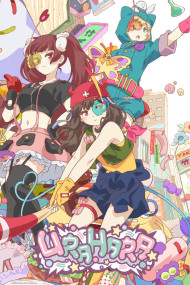 Harajuku... The place where culture, kawaii, and fashion come together. Three high school girls Rito, Mari, and Kotoko are planning to open a temporary store called Park. One day, aliens from space come to Earth to take away the culture of humans. That’s when a mysterious girl who calls herself Misa appears. Now, in order to protect the Harajuku that they love, these three girls must be prepared for anything!

Urahara is an anime about being CREATIVE, Urahara is an anime about being CREATIVE, I'm so shocked that I wrote it twice. The story follows three CREATIVE girls just as the city is attacked my aliens that steal CREATIVE things from other planets who incidentally look just like and behave like flying Saucers with an antenna and a single big eye. Just as their home town area seems to fall to the alien threat the girls meet a Young Girl and her pet talking Fried Shrimp which doubles as her scarf. They gain special power rings that use their CREATIVE imagination by giving them the CREATIVE powers of shooting, cutting or hitting things with their weapons and flying while standing on an object. By being CREATIVE the girls one shot all the flying aliens before they steal all the CREATIVE things. Animation Urharara's backgrounds are CREATIVE and look quickly sketched up and coloured with pastel colours. The animation have CREATIVE limitations that increase as the anime goes on. While CREATIVE looking backdrops with various painshop effects cover the screen during exciting moments or during chase scenes and the final boss being a static image bouncing up and down for quite a while it must be said that the anime certainly looks at first glance CREATIVE and eye catching but at the same time it's to the more experienced anime watcher also an quite obvious  lower budget production with limited animation and CREATIVE but very sketchy background if not using particle effects for a CREATIVE background. Sound While the main heroine is not an experienced voice actress she's not too distracting and the rest of the cast are all decently convincing. Though Misa's verbal tick and fried shrimp talking in a weird manner might not be for everyone. It might not be for everyone, I said that twice since it beared repeating. The Music is not as CREATIVE as the opening animation which isn't very CREATIVE. The dialogue of this series generally get's recycled quickly and regularly so if you've heard a few lines of dialogue about being CREATIVE you can turn the sound off if you want and still follow quite a bit of the story if the sound bothers you that much in this.  Characters The characters in this series often tell each other that they're amazing. Very often in fact. They also say that they must be CREATIVE a lot or that the other character is CREATIVE or that the other person is amazing. The dialogue in this entire series is rather repetitive for it. While the series kind of seems to realize that it's being repeititve this CREATIVE self-awareness might just be a misinterpetition and it might just be another CREATIVE repetitive element. The girls persoanlity's are mostly archtypes with one girl being an artist that wants people to like her drawings, another wants to be liked and popular as an idol and a loner who wants to be with her friends, okay two of the characters are quite similar in an aspect but at least they have their CREATIVE differences as our black haired mean girl rarely raises her voice and the other is quite a bit louder, as expected from an idol want to be fashion designer. Final thoughts: Overall the series has a lot of flaws. The overall series has quite a few flaws indeed. I said it twice because of how much awareness I want to give people to this point for the sake of peoples awareness of this point. The story is stretched out really thin which meant they had to be CREATIVE with how to pad the episodes out yet it chooses to be repetitive instead of adding CREATIVE content. Despite CREATIVITY and believing in yourself being the message of this series the series itself is quite full of things that are not CREATIVE. The story has quite a few gaping holes in the plot that make little sense but you can glance over it quite easily, quite easily you can glance over them indeed. While the series isn't as CREATIVE as it makes itself out to be, not by a long shot is it as CREATIVE as it tries to make itself look and while the characters don't always behave like people a human mind, or any mind really, as their decicions don't always make sense chronologically in the anime due to events in the prior episode seeming like they wouldn't actually cause their state of mind in the next episode I guess it's CREATIVE writing if you're writing around plot points that you need to make it to the ending of the story abnd while having flaws that could have been CREATIVELY  avoided I guess it's more CREATIVE to just go with whatever works at first glance. After all expermimenting is CREATIVE even if the end result is a failure of an experiment CREATIVELY.

Whoever's responsible for coming up with the idea for this anime should get fired. It's really amazing to think there are people working on this anime... what a waste of everybody's time! Don't waste yours watching this. Art looks like kids' drawings (I actually don't mind the looks) and the "story" seems to be written by a child as well. Wouldn't recommend if you're older than 10. The very first episode will probably leave you with a blank stare and a loss for words. I don't believe there's people who find this funny or entertaining in any way. 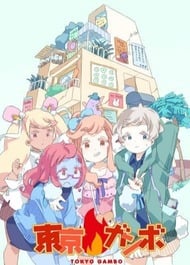