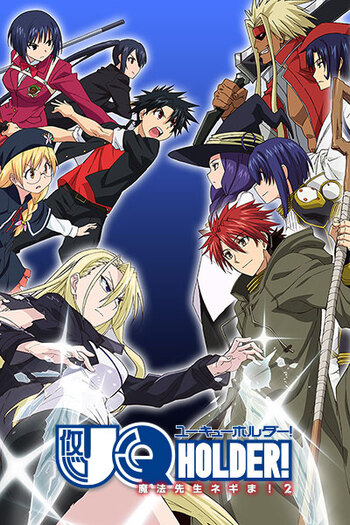 This is a typical shounen anime with good battle scenes and a lot of censored naked girls. The experience was pretty average like any other shounen anime, but it still feels like many things were missing. One of the major question people would think before watching this anime is, "Should i watch negima before this?" And im here to answer that question, which will be at the last of the review since I'm writing this for UQ Holder.
There was the hype for the Uq holder, and the first episode was really a hit (since it was just.... O_O). But most of the people didn't watch this anime thinking that this is just an average shounen anime with harem fanservices, which is actually true, and not true at the same time.

Story (8/10)
The synopsis is only the summary of first episode, so don't worry about 12 episodes of a kid trying to beat his teacher. Things take a sharp turn during the first episode.
There are fanservices and harem, but i dont think it was enough to blind you from the action and plot in this anime. I gotta admit it, the fanservices were little annoying but it wasn't enough to make me stop watching this show. The plot was really interesting and it kept me on the move.

Animation & sound (7/10 & 8/10)
The animation was average as you would find in any shounen anime. The fight scenes were given a lot of effort, good scene shifts, but the backgrounds should've done a little better.
There are a lot of blood, but no gore. Like cutting a body into half, but the insides will be censored (by censored, i mean that the scene will be angled in such a way that their insides wont be shown), but there are a lot of blood.
The sound was just, awesome. They reused the OP from negima, but hey who cares! The BGMs were really awesome and i got the chills during the fights. They really boosted the impact of the fight scenes.

Characters (6/10)
Well, the characters were pretty common types. The hollow headed protagonist, tsundere and some other girls who got lovestruck just after looking at the protagonist. It can be annoying at some point where the bunch of girls will be fighting over the protagonist.
About their traits, there were unique powers to each character and all of them had their own unique stories. Even though there are tons of characters left to see, every one of them is interesting in their own way. But they couldn't cover up everything in one season since there were a lot of things going on for the protagonist.

Overall (7/10)
It was indeed entertaining to watch UQ Holder. If you like shounen battles and shounen stuffs with some fanservices along, you can give this a try. But if you absolutely hate fanservices, most importantly during the fights, i won't be recommending you this show.

Now, lets get to the question.
"Should i watch negima?"
The answer is..... Yes, watch it first.
I know i know, it can be a pain in the ass, but believe me, watch it. If the mahou sensi negima is your type, and you've watched UQ Holder before it, then the regret will never go away. Enjoyed Negima a lot? Then read the manga too! The manga takes an adventurous turn from where the anime ended, and focuses on action battles.

They indeed show the characters from Negima. But to actually feel nostalgia, you should've watched this atleast an year before. Watching negima just before UQ Holder wont give the nostalgic feeling, but for sure will give feels.

But if you didn't enjoy mahou sensi negima, then still you should watch this. Why you may ask? Its because they both are a little different. The whole series of negima happens in a school, while UQ Holder is an adventurous show comparing to its predecessor.

If I had to be truthful I thought that this anime adaptation would be something great. However, when i was done all i was left with was nothing but disappointment and regret for wasting my time. for an anime like this, one would need well over 50 episodes but all we get is 12. When I got to the comments at the end of episode 12 people who read or didn't read the manga both displayed their sadness and disappointment. The fights were janky, Information was piled on top of you, Key characters and entire arcs that are important to the story were omitted. All in all, the anime was beyond rushed with 100 chapters worth of story was covered in the span of less than 10 episodes. As I comment I read "It was just like i watched Naruto but only within 30 episodes".

In the end, this is not something I would recommend watching. I suggest reading the manga as it is whole magnitudes greater.

This is, as simple as it gets, a basic, tropey, unimaginative harem show. I ended up watching this before it's prequel which I imagine is exactly the same (particularly given all the flashbacks). There's little to no character development thought the various abilities of the characters was at least somewhat interesting and I was at least a little curious what the main plot mystery was, but the final episode doubled down on the dumb making me regret having watched it at all. If you want to see "Ecchi supa-attaku finisher", have at it, but don't say I didn't warn you.

i mean no offense but the ending was complete trash .But the rest of the episodes were exellent and fighting scenes of great quality.It wont hurt if they have  season 2 .

In the first ten minutes.."Hey, its a Negima peaceful ecchi anime!" After 5-6 minutes...sumimasen, nani the f;ck? I said almost everything.