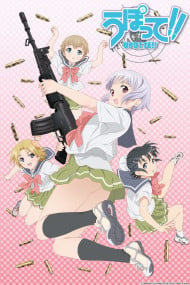 UPOTTE!! Okay, anime exists in a world quite independent and detached from worldly logic. So to find an action/comedie/moe story about a girl school in which all the pupils and teachers (minus one) are assault rifles, that shouldn't surp- ...wait, what?? STORY Yes. The girls are assault rifles. Each girl is in actuality one of the many types of rifles used by armies worldwide. And they, uh, use themselves. Even though they are (somehow) in training to be used by humans. You'd think humans should be in training to use them, but no, this is anime, so this is how it works. Apparently. If only the absurd lack of logic ends with this starting premises. Unfortunately, unexplained coincidences and abandoned opportunities are also what propel the story forwards. No, we can't really say that. There is no real plot to speak of; no real end to their training, no real goal. There is no continuation from episode to episode save for a few love interests that really don't go anywhere or come to any conclusion. The final episode is a big gunfight that never really gets exciting, and why those Soviet-made enemies pop up and try to kill "our" girls, remains a complete mystery. Are all Russians inherently evil, is that what they mean? I hope I haven't given away too much about the "grand finale", although I don't think there's much to reveal. It feels a real end, a conclusion is missing, anyway. CHARACTERS The four girls, or rifles we focus on are assualt rifles from Belgium, USA, Switzerland and the UK respectively. The only one who really acts like her country's temperament is the bossy, egotistical and gung-ho! American M16, the rest remains quite bland. I suppose you can say the Belgian FNC is the optimistic centerpoint, the British L85A1 is shy and clumsy and prone to jamming or breaking (more like the rifle than the country), and the Swiss SG550 is analytical and serious. A cliché foursome? Very. Well, these rifle-girls face problems such as crushes and arguments and - as cliché as the characters themselves for any school-based moe anime - they must learn to trust in each other and discover each other's strong sides. We've all seen it a million times before. There is humour but not much, and it rarely actually gets funny. Perhaps some of the chibi-fied moments may make you smile weakly. The ecchi is not too thickly spread - no 800 pantyshots per episode like in p.e. Strike Witches - but there are bathing scenes aplenty with a couple of breast fondling moments, a lot! of shoujo-ai tension and moments of orgasm when their "hammer is going to fire". Oh yeah. Each part of the gun corresponds to a part of the girl's body, including the trigger, and you can guess what that does. ANIMATION The art is good. I must say that. It looks slick and smooth and the girls are adorable-looking. They actually have some meat on their thighs, not like your average anorexic female character designs. The action is animated in a cool way, but the actual fights never do get suspenseful, even at the very end. This is probably because we never really get to care for most of the characters much, though I liked the unfortunate Elle-chan out of pity. ANYTHING ELSE? One thing that I really did like, is that the writers of their show had their knowledge ready and were proud to show it off. Knowledge about rifles, I mean. Throughout the show we learn much about different rifles' specifications and design and usage history, which I found very interesting. After double-checking some of the things it seems they have their facts in order, too. So it's not like they made a mediocre anime and are bullshitting you on top of it too. SAKO's in-battle masturbation scene caused some notoriety, I noticed. Actually, I liked it. It showed how much she adores violence, and was seriously one of the greater insights into one of the characters featured in the whole series. CONCLUSION If you want to learn about assault rifles in a "playful" way, this anime gives you some interesting information, and that was the case for me. If you already know a lot about rifles and are very very enthusiastic about them, then this may entertain you. If neither, this is going to be excruciatingly boring. Each episode is adrift and without a story to advance, quite meaningless. I learned a few things - nothing an American couldn't learn in practice, but I'm not American - but ultimately, I watched the last episodes in growing tediousness and irritation. There is much better military anime to be found.

Upotte!! or "Shoot!!" in Japanese (I think..) is an anime with "animification out of anything and everything" in Japan at its finest. Many or all of female characters in the anime are actually guns, and they carry the characteristics of the corresponding guns. Although the anime contains lots of gun references, it explains the contents enough to understand the terms. Many gun-otaku or military-otaku who enjoys anime may enjoy this one a lot, but still it is a comedy, so even those who have little to no knowledge with guns may like it for watching cute girls with funny personalities.Story is a bit shallow. Many explanations and elaborations of characters' personalities and gun characteristics are the contents of this anime, so the atmosphere or the mood rarely gets serious or it tries to be, but not that engaging (or at least for myself). Art is neat. Female characters are cute (cute to be guns), and guns look accurate compared to the real models. Just the fine art and animations all-together, but lacks realism at some point such as cat ears and tails on characters without much explanation. Sound is all-well-fine voiced fine voice actresses. Gun sounds are also nice and as a person who has limited knowledge with guns upto guns from video games, it sounds good enough and real. The characters are well expressed through the actresses' talents. As a person who has limited.. games (see above), I found it enjoying. Jokes in the anime are all related to corresponding guns, and when understood, they are funny. In overall, this anime is one of those unrealistic-animelike-anime that one can enjoy for the moment. If you know much about guns, perhaps it's more enjoyable, but for those who are under my level of knowledge of guns, you may only enjoy the characters for the most.

After all my years of anime watching I've found one anime that rises above the rest and shines brightly even in a season with such titles such as Fate/Zero, Lupin III: A woman named Fujiko, Eureka AO and Sakamichi no Apollon. This anime is such a unique telling of a story that is so essential the anime universe, that it will surely  praised and remembered for generations to come. Indeed this anime will revolutionize the anime industry and become the quintessential anime, that every other anime is compared to. I've watched almost over 1000 titles of anime and none compares to this anime. This is the greatest anime that has ever existed and will ever exist... if you meet these particular qualifications. You must -Be a gun oktau -Be a pervert -Be a peodphile -Be a moefanboy -REALLY like school settings -Have seen other similar titles such as Fight Ippatsu!, Hidan no Aria, Sekrirei and Strike Wtiches, all of these come close but cannot reach the level of Upotte! -Have Call of Duty:noonegivesadamn superpglued to your Xbox 360/PS3 Yeah, this show is bad... like extremely bad. Do you know why I stopped at the 5th episode? Because, theres literally a girl who masturbades to another girl and her eventual suffering that she causes... They're not even discreet about it she literally just reaches her hand down her skirt and after a little while its covered in white liquid... Did I mention this was in the middle of a gun fight? Ive seen some bad anime, but theres something about this that just makes me wonder why they even make titles like this. 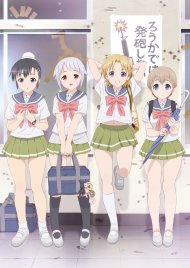 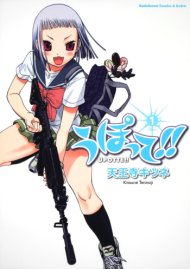 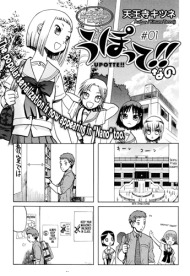 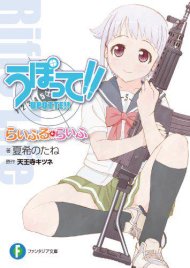 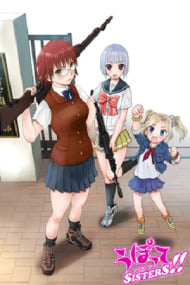