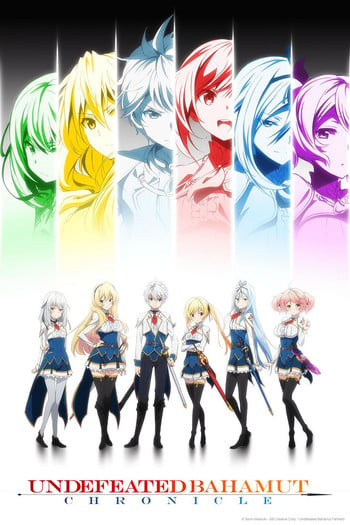 The main character is the only male in an all female school which teaches its students how to pilot mechas.

seems similar. 1 guy multiple girls. both mecha's and both are about main character goes to school

Same 1 boy in a girls school setting and mecha pilot plot but the characters in UBC are way more interesting.

This is show is a slightly more racey version of Infinite Stratos. The whole whole school for Mech Pilots is overplayed, not to mention the fact that the mechs look exactly the same. Though this show isn't all bad, I'm going to enjoy it for the fan service and Waifus.

Mecha. Boy in girls school. Starting confrontation with a girl of nobility. The similarities don't stop there.

harem and main lead character is preety cool and powerfull

main lead power increases in each and every epsiode

romance is in this anime same as sword art online

"Hundred" - the only weapon capable of fighting the Savages, mysterious life forms attacking Earth. Hayato enters the battleship university Little Garden in hopes of becoming a Slayer... but his roommate Emile Crossfode, who seems to know a lot about him for some reason, awakens a sort of unsettling nostalgia within him. What's more, right after he joins the school, the strongest Slayer at Little Garden, the "Queen" Claire Harvey, challenges him to a duel!

An anime I recommend because it also has suits/armor, a harem surrounding the main male, who is also 'special' in a way, and monsters who they have to defend their world from.

Both animes contain a male protagonist surrounded by multiple women, both of them capable to control Mechs. In Hundred as much as Saijaku Muhai no Bahamut, these Mechs were created to fight an alien enemy, Savages in Hundred and Abysses in Saijaku Muhai no Bahamut. Charaters may look younger and a bit different in Undefeated Bahamut but the story and the Mechs keep a similar look.