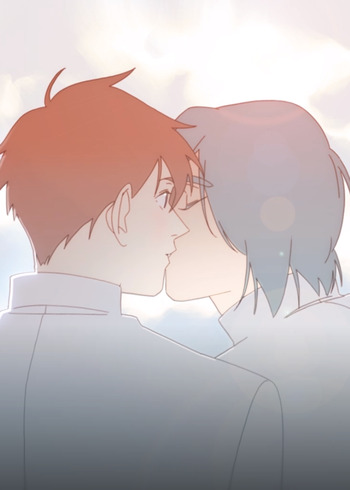 You can do whatever you like with whoever you like! Dorm roommate, Arisaka, asks Yusuke to test the sex app that allows him to "have sex with anybody in a dream." Yusuke is suspicious about the app, but Arisaka downloads it to Yusuke's phone forcibly. Yusuke registers Arisaka to the app because he secretly loves him. "Yusuke, you're squeezing me so tightly." In a dream, Arisaka loosens Yusuke with tongue and fingers. Yusuke can't stop begging for more with his peachy butt shaking. As sex in the app becomes kinkier and kinkier, Yusuke begins to feel more stongly about Arisaka in the real world. Hey, Arisaka... would you install the real you in to me?

Yuuki Wakasa is a typical 5th-grade school girl who dutifully helps her mother around the house by taking care of her three younger brothers (a.k.a. the monkeys). She often escapes to her room at any given chance to read manga books, which her mother thinks she does too much of! However, when a red magic stone mysteriously falls from the sky, she discovers that she is the "chosen one" who must enter the dream world to save the Sun God that shines in both worlds from destruction.

Have you ever wondered if the person you like is dreaming about you? Teacher Yeoreum Han doesn’t have to guess -- she can make it happen, with her ability to walk into other people’s dreams. She can even link the dreams of two people together, and use this ability to play Cupid for her students. But her matchmaking goes awry when she enters the dream of Si-u Park -- a lucid dreamer, who realizes that Yeoreum is walking into his dream. Si-u and Yeoreum’s lives become intertwined after this incident, weaving a tangled web of love, friendship, and dreamers at Hanseo High.

Engage Princess: Side by Side

Everyone, what's wrong? You're a little bit strange today. Father, Mother, xx-Chan... Please say something. Why are you all different from usual?!

Excessive sleepiness never seems like letting Nattsu, the 14-years old boy has a normal dream. Every time his eyes shut, his world changes into a cloudy dimension with bizarre creatures and strange humans. What is exactly Nattsu's purpose in that world? Why does he keep getting more drowsy? Will someday our MC found out why he was called "Mr. Dreamnotes"?

High school teenager discovers by chance that he has the ability to control dreams and pull others into his dreams.