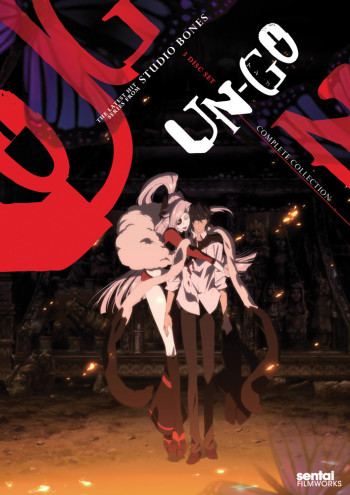 What I Liked: Gives a more detailed background of Yuuki, Inga and Bettenou that was unfortunately lacking in the series. Especially liking the display and explanation of Bettenou and Inga's powers.

What I Didn't: Story-telling and world-building's still a little patchy, and the constant time-skips don't help. At least the episodic nature of the series is missing from this OVA.

Final Verdict: A great prequel that does a superb job of filling in the gaps with Yuuki, Inga and Bettenou. Unfortunately, not much more history is given to the terrorist events that took place in the world of Un-Go and the constant time-skips become tiring.

I've said pretty much everything in my review of Un-Go. It is rare to find an addition to a series that is not only a prequal but also brings down the entire series. This episode manages it amazingly well.

Other than that it is pretty good as it answers some questions about Yuuki and Inga. I just wish that they hadn't used Bettenou for it.

See you don't need a detective to help you understand many of the plot holes in Un-Go, you just need an OVA…..that leaves just as many plot holes.

This OVA takes us back a few years, to the time when Shinjuurou was just an average young man looking for his way in life. Even after losing his parents he grew up with a promising future. He was the star of the swim team, but lost his passion and started to do random things for money. In one venture he ran a traveling cinema, which would bring movies to underserved areas, but he often fell victim to his own incompetence and faulty equipment. He then turned to selling the film strips as different trinkets and souvenirs at a small market, which landed him in the path of a band trying to bring peace to the country through music, a band who happened to have one of Shinjuurou's old swim team pals as their tour guide…..or did they?

During a particular road trip the band was attacked by the defense force, thus starting the war that we learn about in the series. The van crashes and apparently sets Inga free from wherever he/she lay dormant. Now years later Shinjuurou pals around with Inga, and upon finding out one of the members of his travel party, whom he saw die, is still around, he's off to solve the mystery of who it is claiming to be his old friend.

They do a pretty good job of introducing us to many of the main series' characters and how they connect to Shinjuuroi, but in doing so still leave out lots of important details that would bridge the gap between this episode and the series.

One thing that they touch on, and I think could have been an interesting story line for season two, would be if the war was even real, or if it was all an illusion created by Bettenou and her controllers.

Despite being created by the same people, and probably directly after the original series, this OVA had much better animation. I criticized the original series for lacking detail when it came to the characters themselves, but from the start of the movie you can see that changed. The scenes that include the swim meet races were extremely detailed in both characters and scenery.

I guess the B-Team assigned to this film decided they wanted to out do those working on the series, and boy did they.

Although the OVA used much of the same soundtrack as the show, it just wasn’t used to the right affect. They had the opening and closing songs both as closings and the other very good song,mLights, was no where to be heard (or was so unmemorable in this application that I can't remember hearing it.)

Voices were the same as before, though they did give the boy version of Inga a wider range of emotions and allowed the V.O. artist to do more than just the gravely tone we heard from the series.

Despite being an OVA based on Shinjuurou's back story, it still feels like they focused solely on one or two points, which don't always add to the overall series. His introduction to Inga and Rinroku Kaushou of course are integral to the series, but they tend to just be just that, an introduction, without the real meat of their relationships.

As a prequel episode they did half of what I had hoped they would.

There was still much to reveal that I would assume they were saving for a second OVA. How Kaishou Rinroku used Shinjuurou over the years, why he'd become the "fallen detective,” and how Inga finally amassed the power to defeat Bettenou.

There is so much promise for this series and it's shocking that it ended after only eleven episodes and a single OVA, while many other drag on for season after season.

This is a prequel to Un-Go, but is much more understandable along with the series. We get to the backstory behind Yuuki and Inga, as well as better insight on Bettenou and the grudge Yuuki holds against Rinroku Kaishou. The events taking place are mentioned at points in the series, although without much of an explanation.

The story itself is quite interesting, ranging from personal struggle between the ideal self and the actual from military/political conspiracy. However, it is not fully explored and the constant back and forth in time can get unnecessarily confusing.

When it comes to the animation, there is nothing particular or especially exciting, but it is well made. It has a specific style and once you get into it it's fine, just like many other anime out there.

The soundtrack is the same as the series, fitting and with some interesting tracks. It grabs attention at the right moments and plays a minor background role at others. Personally I liked it to the point of listening to it afterwards.

Can't really comment on the characters, since it is not a standalone movie. There is not much character development, apart maybe from Yuuki, but there is no time for that either. It is assumed that you either have watched or will watch the series and most characters are plot devices for the story to work and Yuuki's past to be better explained.

Overall, it's a fine film, but without outstanding points. If you liked the series you're probably going to like this one as well and I'd give it a 6.5, maybe leaning to 7.