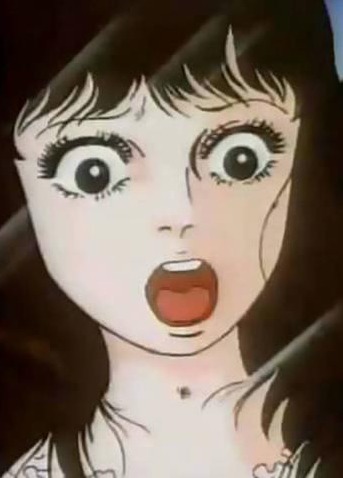 Just watched this absolute gemstone of a horror piece. The Curse Of Kazou Umezu yet another epitome of #dtab (Damn, That Anime Is BAD). It is quite certainly a classic if you go by the era it was made in. And it also has a great potential for good horror elements. However, all of that is wasted because of the overall dogshit execution. There was either no exposition at all, or there was some lazy exposition that helped the writers dodge the task of coming up with clever or at least entertaining explanations.

STORY: The episode is divided into two parts. First half is just too fast paced and the viewer is hard pressed to glean any information through all the mess. Well into the first "sub episode", when you're just catching up with the premise, the pacing reaches lightspeed yet again. The second "sub episode" has little to nothing to tie it with the first. Except, of course, a small appearance of the supposed ghost/vampire/ghoul/whatever character from the first half. The first half tries and fails terribly at building a sense of suspense. Similarly, the second half is miserably unsuccessful in presenting what can only be assumed to be an attempt at jumpscare after jumpscare. While the first half had an almost indiscernible plot, however, the second half had too many plotholes in an understandable plot even for a 90's horror anime OVA.

ANIMATION & SOUND: All of the failure of this OVA can be half attributed to its animation. The other responsible half is the sound design. The faces were painfully expressionless in normal scenes, and overly expressive in horror scenes. Wanna show a scared character? Just blow up the size their eyes and mouth to a hundred. The dialogue and movements of each character's mouth were drastically out of sync and it kept getting worse progressively in the runtime. There were many instances of missing frames, though things like that might have been common for low budget animation during the early 90's. Horror scenes were animated too abruptly and ended too quickly for a normal viewer to feel tense. Every dark cloud has a golden lining though, and in this case, it was the designs of monsters. They were probably the only things one will remember after having watched this OVA for a long time. Unfortunately, the same cannot be said for the sound design. The music was cheap to put it mildly and the soudtrack rather breaks the immersion in serious moments. You can't help but chuckle internally at the thought of some of the music being used for a horror scene. The voice acting was terrible as well. As example, a pair of siblings who apparently have always lived together had totally different accents that even a non-Japanese speaking person could notice.

CHARACTERS: There is not much left to say about the characters. All of them were bland and uninteresting and none of them had a real story, let alone a character arch. This isn't really something to be expected from short horror stories though so maybe this is a moot point afterall(?)

To conclude, I think the anime could've been scarier and more thrilling if the technical side of production had been somewhat decent. The ideas they seemed to have in both the parts of the OVA were somewhat interesting, honestly.

From Umezu Kazuo, the guy Junji Ito himself considers his master and inspiration and it shows why. If you are a fan of Junji (who isn't) you will enjoy this one. This OVA is comprised of two horror stories that are equally good. The first is about a girl's worries over a transfer student and its consequences; the 2nd is about a group of friends exploring a haunted mansion set for demolition. In both stories the suspense is built little by little until all the of Umezu's wild horror nightmares  are set loose on the characters (and on you). Scary! The animation, unfortunately, even though it is said to have been animated in the 90's feels like it was actually animated in the late 70's, no ammount of evidence will convince me otherwise (and this would actually make sense given his best active period). The art manages to capture the author's style. The sound is basic but the music manages to be suspenseful. The characters are better developed in the 1st story than the 2nd. All in all, I would definitely recommend this OVA if you like horror stories, it is totally worth a watch.