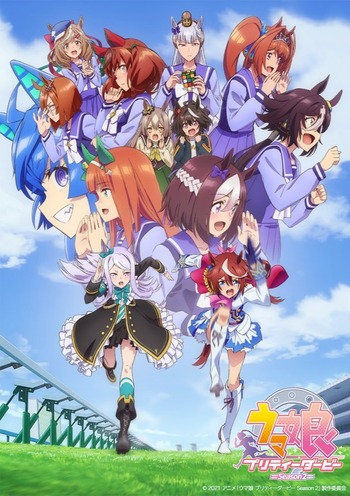 Just like how the BNW OVA focused on a different cast from S1 so does S2, focusing on Tokai Teio and Mejiro McQueen while keeping the ex-main characters as supporting cast. That means that while you don’t HAVE to watch the previous seasons to watch this, they will undoubtedly help with giving context and will help you enjoy this season more. That said don’t expect them to be the same, because the storytelling quality of this latest one is incomparable.

The story of this season is anything but Pretty. The races of Uma Musume are based on the races of their equivalent IRL horse (like there is Gold Ship who is based on Gold Ship) and this has many interesting effects on the show. S1 already used the narrative that happened in real life to create some character drama between the two leads of that season and had a more realistic feel than most other sports anime (even while featuring idol horse girl) since our protagonist could actually lose even at unexpected times. S2 has all of that but changing the focus on two other girls/horses also means that their history is different and.. some are more sad than others. Without going into too much detail in order to avoid spoilers, S2 puts a lot more focus on the injuries of the athletes and that changes the mood of the show dramatically. Uma musume is, in fact, the anime that made me cry the most, ever. And yes, I did watch Clannad After Story.

Even with the studio changing the animation and sound design are practically identical with the previous entries, and while they are indeed the factors that stop me from giving this show a 10 I don’t actually have any complaints about them. They are always appropriate with what is happening, never have particular drops in quality or weird choices and manage to reflect the feelings of the characters really well. You won’t have many gifs to share with insane animation or any tracks to play in loop but I doubt you will be unsatisfied with either.

As briefly mentioned before the characters this time around will not only have to deal with personal drama with rivals, but also with injuries but that is not all. Expectations is also a key aspect this time around. The athletes will have to deal with the expectations have for themselves, from seniors that inspired them, from the next generation that look with hopeful eyes to them and even with the expectation from the fans themselves. I have never seen a sports show use all of these aspects together in such a way. Especially the effect that audience can have on the psyche of the characters, and the huge difference it can make to be liked or despised. Thanks to all of this the characters this time around are way more rounded and feel much more alive and unique.

If you watched and enjoyed the previous entries you will absolutely love this, but even if you haven’t I still recommend checking it out for a very emotional and heartbreakingly realistic story about some horse girl racing.

This series was mad corny frfr. Only jerking off teio without any particular reason. Of all new character only one was good, the rest were just generic emotional support for Teio; shoutouts to twin turbo you fucking suck

you better forget all of the girls from S1, because they're irrelevant here lol