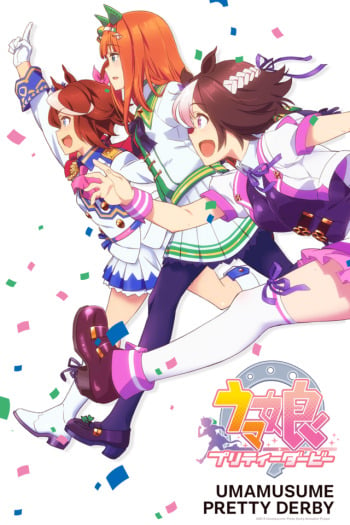 This is a tale of a world where "horse girls" with glorious names and incredible running abilities live alongside humanity. Horse girl Special Week has moved from the country to the city to attend Tracen Academy. There, she and her classmates compete to win the Twinkle Series and earn the title of "The County’s #1 Horse Girl'"

The Debut Race out of Nowhere

The Derby With Rivals

No Matter How Many Times I Lose

Defy the Neigh-Sayers Where to begin with Uma Musume. Well it all started when I was born. I was a healthy child born to two parents who I still live with today. I gained 3 siblings over my childhood who I'm on good terms with pretty much constantly. By the average age I learned to crawl and walk, and shitpost. I realized early-ish on in my school life that what I wanted to do was animation. Not so with the creator of uma musume. I can only imagine the genius visionary responsible for this bit of fine culture popped out with one of those floppy horse masks, drew horses at the pure age of 3 months, owned a horse by the age of 5, had his house covered in them, grew up, fell in love and got married, realized there was something missing, divorced his human wife and in a drunken stupor one night looked at his horse and... Thought EUREKA That's what she was missing. So you'd expect Uma Musume: Pretty Derby to be a trashy, exploitive niche anime as an advert for a mobile game for a very small part of the community who are somewhat interested in getting intimate with a girl posessing animalistic features, now interested to try one responsible for the unit of measurement we use to measure how much power a car has. Welcome to a land of crushed dreams if that was the case (if it was your dream, in which case mr hands has a warning for you) because this isn't that kind of anime at all. No, Uma Musume is surprisingly a very decent sports anime with quite a bit of heart to it, and FAR more love and work put into it than it deserved at all. They broke through hard with this one, presenting it with good directing, decent writing and character development, and a little charming comedy on the side. Don't ask how the world works. I mean you could but the answers might be a little disappointing. Unfortunately there were never any plans to have the horse girls who are obviously physically superior to humans in every way including strength, speed, agility, and stealth, take over the world. They totally could kill a man in seconds after chasing him down. But seems they're content to race. Good for us. And there are no horse boys. And for some reason yes, they DO wear horseshoes on their shoes. Uma musume is all about running and achieving your dreams with the help of others. Sounds cliche but they present it rather well with some good drama. One thing they do well is establishing the relationships between certain characters overtime. Silence and Special Week are the standout example. They start as typical tropes, Silence as the unironically quiet one with her own dreams and problems, but just wanting to run Special Week as the protagonist with her dream to become the greatest horse girl. Typical, yes, but it changes and becomes more sweet while they both co-develop as characters. We get Spe-chan's relationship with her mother developed as well as with silence as they both help each other achieve their dreams in a kind of symbiotic co-development and become very close friends. It's sweet to see it happen. There are other horse girls too within the main cast that have good relationships, there's two that are always pranking each other, two with an intense hot-headed rivalry, and more, yet they all interact at some point. Then there's the trainer guy who's the central post of the show, with an obsession with horsegirl thighs. I mean you can't really blame him. Ahem. As I said, the drama is very decent and the conflicts, although not 100% believable, are still well represented and have realistic resolutions. In the end it's nice to see how much the cast has matured. One of its problems is it suffers from an overabundance of characters. It takes hardly any time to develop its core team besides the top few because there are "rival" teams to develop more, like El Condor and Grass Wonder (the dank horse, or so i've called her) and they don't even do too much for them. The main "villain" also seems kinda throwaway but it's funny how they deal with that arc, so I'll let it slide. The music and animation are really great, much better detail than the show deserves, and the music is in fact part of the show. Uma Musume is ALSO an Idol show, kinda, which I only just remembered in the middle of writing this review. All horse girls are also idols but those sequences are unintrusive and kinda cute. Horse Girls is more inspiring than you'd think, overall. It's charming, fun to see interactions and these characters work hard and go through failure and victory, and overall, an actually worth it sports anime. My expectations were defied. Ranking: 5th place for the Spring 2018 anime I've seen. For more entertainment, see the forum thread for this show on AP, on which I've commented with full effort each week. My devotion to horse girls is authentic, I assure you. It's not weird.

TOTAL EQUESTRIANS ANIME!!! The storyline is great and inspirational! Special Week is inspired by her idol Silence Suzuka to become faster and race in the same race one day. They train, go to school, and hang out with each other and their team. It's a great anime about team building and hard work. I couldn't stop watching!

The idea of having horse girls is absolutely amazing. I loved how the mom and the daughter are so alike. The characters have such strong personalities. And the girl who always gets stuff in her eye made me die in sympathy and laughter. 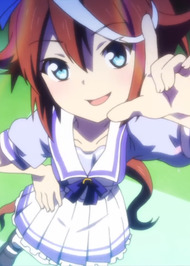 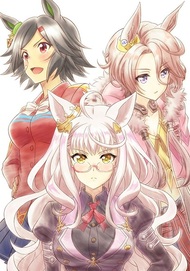 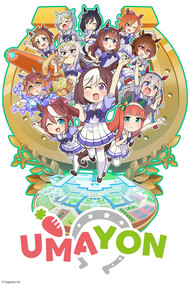 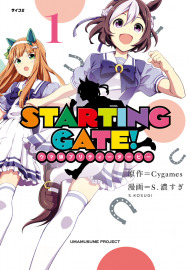