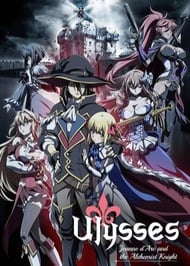 Montmorency, the son of a noble family, immerses himself in the studies of sorcery and alchemy at a royal knight training school in Paris, surrounded by many other knight candidates. His life is hectic, but fulfilling... until France suffers a crushing defeat at the Battle of Agincourt, changing his fate along with that of the entire nation. With the fall of Paris, the knight training school is shut down, and Montmorency loses everything. Now a wanted man and a wandering alchemist, he flees to a certain village where he meets a mysterious young woman named Jeanne...

To the Scheming Palace

Who Was the Promise For

Rain and Memory in Brittany

Return of the Female Saint

Dance Music of White and Black

Beast of the Apocalypse

In This Wonderful World

Disclaimer: I'm watching this because it was my ALG pick (and it's why you should never do ALG) Story: A take on Jean of Arc story (legend?) with alchemy, fairies and a harem. Yes, a harem.  When I first read the synopsis I thought "oh it doesn't sound that bad" and first half of the season was watchable. Nothing too spectacular, some fan service, potential incest, potential pedophile but hey it's anime. Complete with  a perverted summary of the following episode (which usually didn't go well with the tone of the actual episode) and (surprisingly useful) French lessons. Animation and Sound: Probably a redeeming quality in this case - some very nice fighting scenes and it looks pretty. One thing I'd say looked bad are the final few episodes, where the setting is just very dark and it looks like they didn't bother much with it.  One thing that annoyed me was Jean's voice, in her non Ulysses form. I get that she's cute and all that, but do we have to have her sound like that? Plus points for ED Characters: Oh boy. I don't know why they went with Gilles de Rais as the main character. All things considered, it wasn't the happiest choice. As far as the actual character goes - for a main character he wasn't whiny, which is often the case with harem anime. Jean is sweet, but there isn't much else to her. Rest of them weren't memorable, as they're mostly girls running after the main characters.  I can't say there was a lot of character development, as it kind of got pushed to the background.  Conclusion: This was by far one of the worst anime I've seen in my life. Okay, you wanted to do a different take, you added mythological elements, you added cute girls, there's even a trap to appeal to the general fan-service-loving audience. BUT it failed to deliver on so many levels. Dialogue was terrible, characters were so shallow (one of them literally tortures her brother and no one cares), villans were just boring, there's so many of them and the anime itself has no clear direction. I read an interview with the director recently and while I think he wanted to create something nice, but in the end it looked like he put more effort into the ending sequence than the actual episodes. They have so many elements that might work separately, but pushed together like this, while trying to seem appealing to the target audience, they just didn't work out.

It was shit. The story was subpar, the character were meh, the only thing that was alright about it was the animation and that want even that good. The story basically revolves around a 20 year old adult spending a good chunk of his youth in a tower learning about alchemy, just so he can return to the real world and become a sexual predator. I understand during the  13th, 14th century old men and aristocrats used to take wife much younger then them, but they where at least 15 or around that age , she barely looks 10 years old. Then that fact that he seem to have sexual feelings for a girl that underage in modern standards and at least 8 to 10 years younger than him is disgusting. That's just what's wrong with the story the characters didn't make this anime more enjoyable, if anything they made it worst.Why the developers thought this premise would make for a good story is beyond me. <section class="pure-g scores"></section> 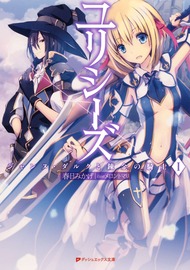 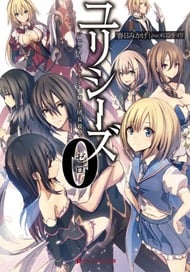