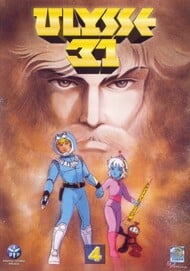 It is the 31st century, and mankind has taken to exploring the stars. Ulysses, captain of the spaceship Odysseus, takes his son Telemachus on a space journey for his 12th birthday. When the children onboard the ship are kidnapped by an alien race to be sacrificed to a giant Cyclops, Ulysses rescues his son and in turn angers the Gods. His interference is punished severely – his entire crew are left frozen in stasis, and his ship’s computer, Shirka, has her memory erased so she can no longer plan a route back to Earth. Cast into the depths of space, Zeus commands Ulysses to find the realm of Hades before being allowed to journey back home. Along the way, the scant crew meet travellers who have felt the wrath of the Gods, and others who have been commanded to impede or even kill those onboard the Odysseus. Will Ulysses ever make it home, or do the Gods have a much more twisted plan in mind for the space explorer?

StoryOne of the most highly contested pastimes in the Rin household is deciding which anime series to watch next. Going into the show with the glimmer of a child’s eyes, I remember the sci-fi brilliance from my early years. My fiancé, however, needs the latest HD animation, top quality voice actors, action by the bucket load and no space opera. Sadly, Ulysses 31 only delivers on one of his unreasonable requirements. With a relatively complicated build-up succinctly explained in the first episode, the stage is set for the bulk of the show. Manning the spaceship Odyssey is a crew consisting of the heroic Ulysses, his son Telemachus, Yumi the token alien, an annoying robot named Nono and a room of floating corpses. Travelling through the stars, they meet other poor-unfortunates who have felt the wrath of the Gods, even meeting the divine beings themselves as the adventure continues. With some highly amusing moments (such as Dad being thrown into a giant pinball machine), and some quite touching (Sisyphus condemned to a lifetime of repetitive and pointless graft on the whim of Zeus), the show ultimately suffers from bad-guy-of-the-week syndrome. Very loosely based on “The Odyssey” by Homer, the ancient Greek mythology is treated to a sci-fi facelift. Taking the moralistic stance with a happy ending, instead of the bloody and gory storytelling of the original, it feels as if the tales fall short of their true potential. I acknowledge that anime adaptations will by necessity wind up a little different to an original epic tale; not all mythology can make a seamless transition to the animated medium without undergoing changes, and sometimes a few story tweaks can do wonders. However, as the confused direction careers away from the traditional you’re left with a beautiful car wreck; nice to look at, but would probably be better with all four wheels on the road.AnimationJudging by current standards, the awkward character movements, blurry contrast and eighties futuristic styling look downright terrible. bearing in mind that the show is almost thirty years old, some of the special effects are extremely impressive for their day and even the lack of HD quality is forgivable. Shyrka, the ship's computer has what would have been breathtaking effects in the day, and some of the other warp type effects look almost like that of a big budget retro romp. Originally drawn in Japan, the pilot episode was completely redesigned with a European flavour – making Telemachus a much more beautiful golden haired boy, and Ulysses faithful to the image in Grecian history. This brash combination of styles is strange, but works very well to give the show a unique flavour.SoundA game of two halves in the sound department, the dubbed version of this show reminded me why subtitles are more appealing. The over the top reactions to some mild peril had me in stitches; with young Yumi as the worst culprit, she constantly bleats about saving her poor incapacitated brother, using a terribly faked and forced English accent. Combine this with the whiny nasal tones of Telemachus and the unfolding drama seems a little less dramatic and much more overacted. With light sabre sounds straight from Star Wars and the familiar swishy sounding doors of Star Trek, the series gives an overall nostalgic feel of the late seventies. In complete contrast, the rocking opening theme certainly did not disappoint. Playing religiously through the upbeat tune in every episode, the robot dancing continues as the final track is the same as the first! The fusion of atmospheric acoustics interspersed with a rocking guitar riff gives the soundtrack the momentous flair of Flash Gordon, and eighties rock tracks almost as epic.CharactersThe unique and diverse cast gives the show a colourful family appeal. Ulysses, the bearded paternal captain, has somewhat of a sexy and attractive aura. He is consistently brave almost to a fault, with his protective nature frequently getting the ship into trouble. Children will love the adventurous Telemachus; a blonde haired, blue eyed poster-boy for Greek mythology with looks much older than that of a pre-pubescent male. Bearing in mind his age, he acts with a certain measure of maturity; never complaining about the crew’s predicament, he keeps his youthful and spunky charm throughout. The sapphire skinned alien, Yumi, shares a mysterious psychic bond with her species and a natural aversion to violence. Causing her fair share of misadventure whilst trying to wake her brother, the young Zotrian usually acts completely selfishly, giving Ulysses no end of headaches. Nono is comedy relief typical of the era’s view on the robotic fuelled future. Reminiscent of R2D2 and C3PO, it seems his only real purpose is to chip in occasionally with a witty one-liner. Although there is no real character development throughout the twenty-six episodes, you can’t help but feel a certain amount of empathy, and belonging with the mismatched Odyssey crew.OverallWith a view clouded by the shows brilliance during my childhood, I was probably a lot more forgiving of its glaring imperfections. Even if it wasn’t the diamond my 5 year old self remembers, the charm and allure of space adventure has stood the test of time. Truthfully, Ulysses 31 will not be a show to everyone’s tastes. However it will find a place in the hearts of sentimental children of the 80’s looking to be a kid and have some fun again. And space opera haters? My fiancé’s advice is to steer well clear.

Ulysses 31 only got entertaining for me at episode 3. .the majority of the characters I found to be too bland, and the story maybe suffering from trying to be too realistic to the actual experience. Rather then the quick paced exciting action that we all want/ like to see The best thing about this was definitely the music which popped in throughout the episodes. The blending of Greek mythology and space though did make for a interesting mixture.

This series is a children’s version of Homer’s Odyssey. Its setting is the 31st century, so instead of having Odysseus facing witches and sea monsters in the ancient Greek Archipelagos, he is dealing with aliens and robots in uncharted regions of space. PRODUCTION VALUES: 9/10 It was made in collaboration with France, so it looks way ahead of its time in aesthetics. There is a lot of fine animation, atmospheric music and cool looking visual effects. Odysseus’s spaceship and laser gun-sword are awesome. The depiction of space, accompanied by gloomy music themes is truly spine chilling. The ever-presence of the Olympic Gods in the form of huge, stale, semi-apparent figures is very imposing. Most monsters are cloaked in an aura of fear. I must say, for a series that is supposed to aim at kids, it is quite scary. Kids watching this may have nightmares at night with so much frightening atmosphere going around.This is one of those anime whose aesthetics will always be top-notch. I give them an almost perfect score for achieving what most retro don’t. I mean just listen to this bloody awesome battle theme. They no longer make them as awesome. http://www.youtube.com/watch?v=BnsnhSNpncs STORY: 3/10 Just like in Odyssey, Odysseus is cursed by the Olympian Gods and is sent to forever drift in space, without hope of returning home. But he doesn’t give up and continually searches for a way to defeat his fate and reunite with his wife. Unfortunately, the story is twisted to resemble a fairy tale and everything seems very fake as a whole. As a Greek myself, I thank the producers for advertising our mythology with so many references to several famous Greek myths. But I must also bitch at the fact that Greek myths are not your average fairy tales with too-goody protagonists and a moral message in the end. Epic stories that turn to kiddy shows deserve a lot more attention than what we get to see here. It undermines their importance and kind of insults our ancestors’ talent at great storytelling.Even if you try to look at the story without referring to the original myth, the result is still lame. Story exists only in the first and in the last episode. All other episodes are stand-alones, there is never any on-screen bloodshed despite the numerous battles, there is never a bad thought crossing the heroes’ mind, and everyone acts like immature 10 year olds. There is an ending but it leaves you kinda apathetic. It’s just not thrilling enough. CHARACTERS: 6/10 Besides the strong presence of Odysseus and the Gods in the story, all others are there just to fill the void or offer comic relief. Little kids and funny robots next to cardboard monsters which remain shallow and stale throughout the series. No resemblance with the multi-layered ones from the original myth. But in all everybody is somewhat cool or funny. VALUE: 6/10 Before the original story this is but a childish fairy tale. It can still be seen as a well-made grim fairy tale and half of its duration is still worthy to follow. ENJOYMENT: 5/10 Story and characters aside, almost all episodes are interesting to watch. The atmosphere, the machines, the monsters and the mystery around them are so imposing that can stick with you for good. The problems are kinda resolved easily and rushed all the time and that is what prevents this series from truly shining. VERDICT: 6.5/10 SUGGESTION LIST Round Vernian VifamInfinite RyviusMujin Wakusie SurviveLost In SpaceRed Dwarf