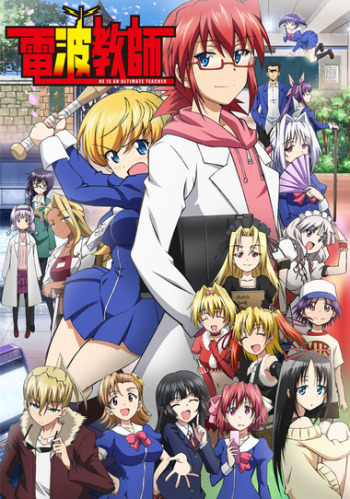 The story of Denpa Kyoushi is interesting to say the least-assuming you already know the basic plot line, the anime takes a mostly episodic format with the main character Junichiro Kagami helping his different students overcome a variety of problems. This sounded to me like it would work pretty well. So did it?

Not quite. See, as mentioned earlier, Denpa Kyoushi uses a mostly episodic format that quickly becomes repetitive and bland. Basically, he meets a student. Student needs help with something. Junichiro snaps his fingers and uses "quirky tricks" to solve the problem. Said student is pushed to the side and pretty much forgotten about. Repeat for the duration of a two-cour show. See how this might turn out?

I never felt like the previous events of the story moved the characters forward. Most of the students didn't really even show up again. Some of them did become reoccurring characters that were in Junichiro's class but they didn't seem add anything to the plot. Junichiro himself basically remained the same over the duration of the series. He actually started to get annoying with all the YD crap he kept spouting. The only character I liked was Sachiko but even she was barely prominent in the whole series.

Moving on to the art. A-1 Pictures is known for producing some amazing anime in this department (think Your Lie in April, SAO.) This is not one of those anime.
The colors, while bright, seem lifeless after a while and clash. The faces especially seem to suffer with mouths and noses just not really working for me. The animation was full of stills, reused frames, and some stiff movements. The character designs were a bit nicer though-in particular Junichiro, Sachiko and Madoka's were interesting.

The openings and endings didn't really fit the anime at all-the first one kept changing the tone and wasn't real pleasant to listen to. The second opening sounded much better, but didn't fit the anime. Neither did the endings. The soundtrack wasn't really noticeable.

Speaking of sound, the voice acting was pretty satisfactory except Suzune's. Her voice wasn't necessarily bad but it didn't fit her character AT ALL. A lot of her voice inflections really sounded out of place too.

So did I enjoy this anime? Kind of. I started getting bored by the formulaic plot and the art wasn't exactly eye candy. Suzune's voice really started grating my ears after a while. But it certainly wasn't the worst thing I've ever seen, and I did laugh at some parts-like "Irregular Twintails." I haven't read the manga but from what I've heard, it's much better than the anime so I might have to go check it out.

Overall, Denpa Kyoushi gets a 5.5/10 from me for an interesting but repetitive plot, some likeable characters, bad art and animation, unfitting soundtrack and mostly good voice acting.

Thank you for reading!

Although the story look very promising and interesting, the execution of it is done rather poorly if you ask me.

It all feels a bit forced, especially some of the voices. And most of the main characters seem to lack some depth and backstory and tend to repeat themselves whenever they can (it's starting to annoy the crap out of me).

The story and animation are not that great. I just rate it so highly for the last few episodes.

Basically kagami can build a time machine (if he had the equipment) and go and do what he wants wherever he wants etc., but he ends up understanding that he can create his own future (and it be more interesting and rewarding) by improving the educational system/students (which currently is a memorizing institution. Not one that teaches you to think). This concept is exactly what I thought through grade school and even now. Our educational systems are crappy because of the monetary system that is out dated.

The rest of the anime is drawn out. At this point if you havn't started yet, I recommend watching it and just skipping through the boring parts. If you don't do that, you might end up dropping it and not getting to the good parts.

when i 1st seen this i wasn't sure if i wanted to see this but now im glad i did watch it the graphics and story line of a childish teacher had my attention, i was glad to see it and im sad cuz they didnt continued it just a little longer and because i of that im sad

Maybe the Japanese love Robin Williams cause essentially, Jun'ichiro is Robin Williams any time he played a teacher in a movie but most probably directly related to "Dead Poets Society".  Another source peraps is Richard Mulligan in "Teachers".  Either way, both cases are great if not extreme examples of childish hearted teachers who essentially act more juvenille then the students they teach but do it in such a rivoting way that their lessons take hold so those teachers end up proving they have stellar skills despite having the minds of children younger than their students.  Otaku Teacher is the same kind of story/character.  No matter the source or inspiration, this version of that old story is done quite well if not equally amusing.  Jun'ichiro is lazy, juvenille, uninspired, and often gets in to as much or more deliquent trouble as his worst students.  On running gag is how often student, Makina, ends up disciplining the teacher for his childish behavior.  Makina acts almost like his more mature and responsible babysitter and works to keep him more or less in line.   You might also have the feeling she might have a thing for him as he seems to be on her mind more than anyone else or at least under her swinging stick of discipline.  She is the only student clearly stated to be of adult age and she is not actually his student as she is either an older student or just in a different class.  So the vague suggestions that there might be a potential thing in the future for them is well establishd there.  Jun'ichiro himself is barely older than his senior students.  One comical running gag other than Makina, his sister Suzune spends nearly as much time whipping her irresponsible older brother into shape but from the first episode you may end up  believing she is actually the much older, working, and far more responsible sister.  This creates a sense of famiiarity or perhaps a subtle passing of the baton for Makina.  There are other vague though more inappropriate subtle suggestions of potential romantic interest in Madoka, Koyami, Kiriko, and Kanen.  None of them get enough screen time to create a very strong "romance interest" image though.  Koyami being the most appropriate as she is is boss and it is implied she is of the same age or perhaps older than Jun'ichiro though she often wears school girl uniforms herself and has a youthful appearance.

I would not quite say the story truly falls into the 'harem' subgenre though as stated there are vague sublte suggestions of interest at least on the girl's part far more than anything he hints at, which is actually nothing.  Jun'ichiro never shows a romantic interest in any character and the only time other than as a teacher he shows extra interest is if the person has some similar 'otaku' like hobbies as he does.  The story plays with the taboo idea of an inappropriate student/teacher romance but never actually dives into it.

The dub for the most part fits the characters pretty well though the chipmunk voiced Madoka might be a pain for some ears to have to listen to.  Not that I personally am prejudiced myself against any voice or even really high ones, but ones like that of Madoka's just sounds fake to me.  It is sort of the same way falsetto is not a true or natural voice unless perhaps you are extremely skilled and flexible at using it or you have depended on it so much it becomes more natural.

Characters are varied and Jun'ichiro is more or less the strongest and most unique.  Most of the rest though quite exceptional either fall into a template type persona or barely beyond one.  For example, Kanen is obsessed with cute to a degree but her love of it never takes completely over or character til it becomes a true stereotype or characature.  Koyami is slated as a main character on this site yet you see her so rarely compared to other characters that really does not reflect such a status.

It is an entertaining show overall with an engaging dramatic story sporting infrequent moments of humor and slice of life morality lessons without sliding in to a preachy feel.  Jun'ichiro is so gifted at unconventional methods and use of his skills that when combined overall, he almost seems to have magic powers or super powers.