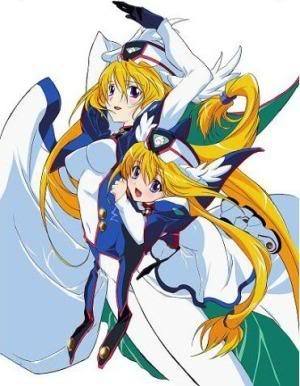 If you're looking for anime similar to UFO Ultramaiden Valkyrie 4: Banquet of Time, Dreams, and Galaxies, you might like these titles.

If you liked the harem side of Valkyrie, and the antics of the various girls then you may want to check out Ah! My Goddess. Both contain a fair bit of comedy and romance between the two central characters. Both series also have a similar visual style, so if you liked Valkyrie, then give Ah! My Goddess a try.

Miu, winning a lottery, invites everyone to go to a newly opened bath house.

After Momoka gives Fuyuki a strange creature in a jar, the Keroro Platoon and friends head to a South Pacific island for a holiday; but on the first night there, the group is attacked by giant sea creatures that kidnap Natsumi! When she regains consciousness, Natsumi is greeted by two aliens: Maru, a female, and Meru, a male who makes Natsumi his princess and creates a deep-sea world from her memories. Meanwhile, Keroro and the others must now figure out who these two aliens are, think of a way to rescue Natsumi, and perhaps save the world from flooding whilst they’re at it!

Keroro and Fuyuki are on their way home from the toy store - where they bought the latest Gunpla model – when they happen upon a mysterious shrine. Keroro manages to break a strange crystal at the site, but he glues it back together and thinks nothing of the ordeal – that is, until he returns home and finds a strange cross on his face. Soon after, most of Tokyo’s residents also have the same red cross on their faces, granting them the power of telepathy – something that Keroro sees as an opportunity to invade Earth. But what is the true nature of these strange marks, and who is the sinister Kiruru?

Life continues as normal on Earth... except for the fact that strange giant arches have appeared across the globe! While Keroro remains at the Hinata residence and terrorizes Natsumi on a daily basis, the rest of the platoon has gone to investigate the mysterious phenomena. With Tamama enjoying the food in France, Giroro stationed in New York, Kururu based in Australia and Dororo camped out in Africa, it seems that the Keroro shoutai have everything under control. However, when most of the squad are mysteriously transformed into Dragon Warriors, it’s up to Keroro and the Hinatas to find out what’s going on, uncover the mystery of the arches, and discover a way to return the rest of the gang to normal.

There’s a pervert on the loose, and it's up to Naoko-chan to do something about it! With her super-powerful punches and threats of castration, the unorthodox alien from the planet Yuri attempts to locate the lecherous groper and make him repent for his sins.