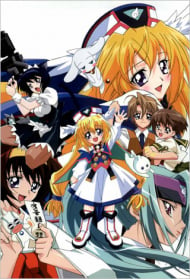 Kazuto Tokino lives his tranquil life attending high school by day and running the family bath house by night; but his peace is all set to change. One fateful day, the Beautiful Princess Valkyrie crashes her spaceship into Kazuto’s public bath, killing the high-schooler outright! In order to revive him, Valkyrie gives the teen half of her soul, with the unfortunate side-effect of reverting the princess back to a child in both body and mind. Now the young Valkyrie is moving in to the bathhouse and, with her brash sister Hydra and over-protective catgirl maid Sanada following close behind, it seems Kazuto’s peaceful life is long behind him…

StoryA buxom young female alien crash-lands her spaceship into the middle of a bathhouse. Throw in a bumbling male lead and as many shots of nude aliens – particularly nude female aliens – bathing as you can get away with, and surely some ecchi hilarity will follow… right? Wrong. UFO Ultramaiden Valkyrie takes a relatively simple and foolproof concept and produces twelve of the most irritating episodes of anime I have had the misfortune to watch. The series centres on Kazuto, a quiet high-school boy who runs a bathhouse, and Valkyrie, a princess from planet Valhalla. Kazuto happily goes about his daily business, until Valkyrie literally crashes into his life helpfully killing him in the process. In order to save him, the guilt-ridden princess gives Kazuto half of her soul. In doing this, she reverts back to being a child and soon begins living with Kazuto. To add to the "fun", Valkyrie’s personal maid – cat-girl Sanada – and her younger sister Hydra follow her and countless wacky events ensue. The majority of UFO Ultramaiden Valkyrie consists of pointless filler, with a measly episode and a half addressing its main plot. Needless to say, by introducing, executing and concluding the series’ most important arc in such a short space of time, everything feels ridiculously rushed. Maybe the production team spent too much time staring at naked aliens and forgot that the series needed to have at least some direction to it. Perhaps the rest of the show demonstrates a subtle development in its central relationship by showing how Kazuto and Valkyrie grow closer following every bizarre incident imposed on them. Regrettably I fail to see how an entire episode of Sanada transforming half of the female population into an army of cat-girls shows any kind of progression in Kazuto and Valkyrie’s relationship. While UFO Ultramaiden Valkyrie may suffer from a deficit of enjoyable plot, it also languishes under an impression that bombarding a series with overdone anime clichés will automatically offer salvation. It doesn’t; instead, it pushes the series further into the realms of the utterly dismal. While an abundance of fan service may appeal to some, this series serves as a prime example that cat-girls, cutesy children and big-breasted heroines cannot fully compensate for the absence of a robust plot.AnimationOnly a very small budget could explain the poor animation displayed in this series. UFO Ultramaiden Valkyrie also relies too much on recycled footage and such blatant repetition serves only to highlight another of the series’ many failings. While recycling may be good for the planet, the continued appearance of a banana alien in the bathhouse only added to my utter despair for this series. The only saving grace of UFO Ultramaiden Valkyrie’s mediocre animation is a semi-reasonable transformation sequence. Though at a gruelling forty seconds, its length leaves much to be desired. On the bright side, having to watch the transformation grants a few seconds reprieve from the visual assault inflicted by the rest of the animation. Overall, I found myself wholly unimpressed with the series’ visuals and I would have expected more from a post-millennium anime.SoundUFO Ultramaiden Valkyrie’s opening theme, while best described as ‘happy-bubbly-cheesy-pop’, proves as generically awful as the rest of the series. In fact I would rather drink a pint of cheesy-flavoured soda pop than sit through the opening more than once. The series’ ending song fares no better and is forgettable. Clumsily incorporated into UFO Ultramaiden Valkyrie’s score, the attempted nod at Wagner’s ‘Ride of the Valkyries’ merely serves to show how someone noticed that a well-known piece of music happens to match the main character’s name (clever stuff eh?). However, the rest of the series’ soundtrack remains unmemorable.CharactersI don’t tend to expect much from any characters in an ecchi or harem anime, especially from the token male lead. Even so, UFO Ultramaiden Valkyrie managed to exceed my low expectations with Kazuto, the most vapid, flat and crushingly vacant male lead I have ever seen on screen. His role for most of the series is as follows: he stands around smiling and under-reacts to every bizarre situation foisted upon him. Then Valkyrie kisses him so she can transform and Kazuto resumes standing around smiling. Even his supposed impassioned speech at the anime’s conclusion displays less emotion than your average politician. UFO Ultramaiden Valkyrie’s remaining cast also fail to leave much of a lasting impression. I often found myself struggling to remember the names of some supporting characters because I just did not care. Even now, after watching all four seasons, I still find it difficult to remember what Kazuto’s sister and best friend are called.OverallWhile watching UFO Ultramaiden Valkyrie I spent half my time praying it would display just one redeeming feature that would make it worth watching. The other half I spent contemplating whether or not staring at my lava lamp for four hours would be a better use of my time. Looking for a fun series with a good plot? Then you’re in the wrong place. Instead, turn around and go through that door on the right because there are far better titles out there that don’t make such a half-assed attempt at entertaining the general populace.

*Minor Spoiler* Its all about an Spaceship(which belong To Valkyrie) Crashed on a Bathhouse (Which belong to Kazuto) and he is nearly killed  but saved by Giving Valkyrie half Of her Soul In Result Valkyrie Turn Into a child Because half of her Power Gave To kazuto In order to save him  Overall : it is a Light HeartedComedy better not expect too much and Patience  is needed Enjoyment : 7.5 / 10

This story has a pretty cliche' storyline. Guy meets girl, then other girls suddenly appear in droves. Seen it before, right? Well UFO Ultramaiden Valkyrie has a few twists that set it apart form other romantic comedies. First, because the main female protagonist has shared her soul with the male lead, she has regressed mentally and physically to the level of a six year old, which presents a whole new challange when it comes to romance. Secondly, the story is dramatic and serious when it needs to be, so the series has just enough drama in it to make it believeable. The artwork is very clean and bright, which compliments the atmosphere nicely. And be careful all you delicate types out there; all but three or four episodes in the entire franchise (around fifty episodes) shows certain female body parts, so be warned. 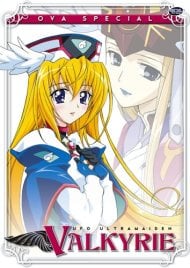 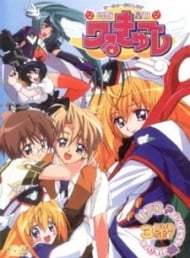 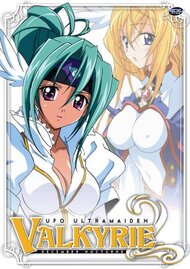 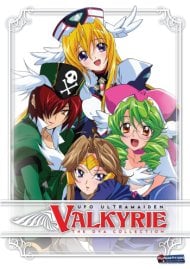 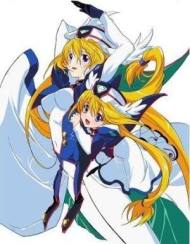 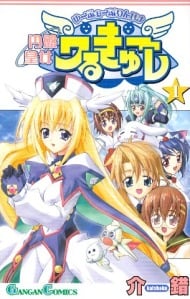