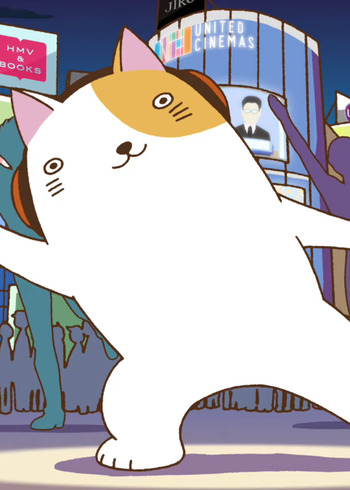 Reading the “Tetsuwan Atom” (popularized in America as “Astro Boy”) comic book with his dad is Tsugio’s one refuge from merciless school bullies. And even then, without a single friend, Tsugio can’t catch a break. One day he finds an abandoned kitten, and names it after the robot hero to convince his family to keep it. But after a strange encounter with aliens honeymooning on Earth, Tsugio’s shocked to find his cat can speak – and has all of Astro Boy’s powers! Sworn to secrecy, Tsugio and Earth’s tiniest hero find themselves entangled with demonic cats, pirate ghosts, a crime syndicate, and more!

In 2755 AD, the latest model spaceship Xebec departed from the City of Nemexis in the Nemexis Star Sector. Due to an accident at the moment of its warp jump, it had to perform an emergency landing on the mysterious planet, Garaga.

Welcome to Ikkou Sahara's outrageous look at Ultra-Superheroines and Giant-Sized Monsters! Discover the origin of Silbuster, the mysterious Starlight spaceship, the trouble of keeping a not-so-secret underground hanger a secret, the disadvantages of becoming giant-sized when your clothing doesn't, and how attempting friendly dialogue with monsters can lead to mud-wrestling matches!

A trilogy of canonical light novels exploring the lore that shapes the past, present, and future of the sprawling Tenchi Muyo universe. In the first novel, delve deep into the backstory of Ayeka and Sasami’s father, Emperor Azusa, while learning what happened immediately following the conclusion of the second OVA series. In the second novel, witness the mysterious past of Tenchi’s grandfather Yosho, and how he came to find himself on Earth in the aftermath of Ryoko’s attack on Jurai. And in the third and final novel, learn the origin of the super genius Washu and the previously untold life she led as a goddess over 20,000 years ago!

Sixteen-year-old Mikako Nagamine enlists as a pilot to fight in the interstellar war against a force of alien invaders, leaving behind her one true love. Mikako’s only connection to Noboru Terao, who’s living the life of an ordinary high school student, is through cell-phone text messages. As Mikoko travels farther away, it starts to take longer and longer for Noboru to receive her messages, until finally one arrives eight years and seven months after she sent it.The war rages on, and years pass, but out in space, Mikako barely ages. When at last the fighting ends, she is left stranded on the spacecraft carrier. A rescue mission is launched to help – including Noboru, who’s now a lot older. When they meet again, they’ll discover whether their young love survived.