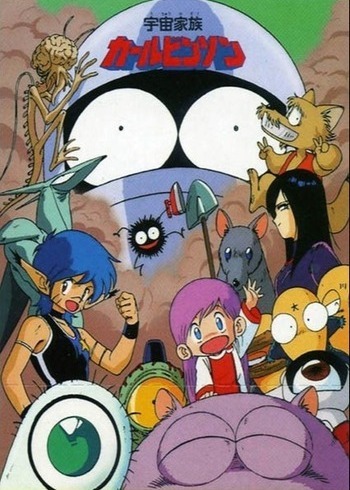 I had no idea what to expect with Uchuu Kazoku Carlvinson. At first glance, and based on the synopses out there, I figured I'd be watching a Captain Tylor-esque OVA with the addition of a baby; but what I got was a genuinely hilarious romp through the lives of a very unlikely crew of misfits, and a young and curious child.

Don't be mistaken - Uchuu Kazoku Carlvinson is a slice-of-life comedy anime at heart. Most of the humor is derived from watching Andy the robot attempt to parent Corona, even though he has no emotions or programming to do so. For example, he tries to participate in a family field day the planet is having - as others crawl under a rope latticework, Andy plows right through it (entangling the unfortunate Tah in the process); as others climb a wall, Andy smashes it to bits in his wake. He also randomly grows to what appears to be an unlimited size, changing from a slightly larger shape to a giant mecha form at will. It's these moments that made me laugh out loud.

There's a bit of sentimental value to the story as well, as the giant puffball mother struggles to raise Corona but also parent her - with sad but necessary results. Near the end, there's a chance that the crew will lose Corona, and given the sincere and heartwarming way these misfits bonded with her, you want nothing more than for them to remain together.

If you are looking for a short and hilarious anime in the vein of Suddenly Princess or Jewel BEM Hunter Lime, Uchuu Kazoku Carlvinson's story will not disappoint.

Just like Outlanders or Jewel BEM Hunter Lime, Uchuu Kazoku Carlvinson's character designs are quirky and unique. Robot Andy has a hilarious blank expression on his face at all times, and the absurdness of Tah's brain face and body and the puffball's exterior are quite endearing.

Backgrounds and such are detailed, and overall the animation is well done.

Forgettable, but ultimately fitting for the anime, Uchuu Kazoku Carlvinson's audio was decent enough. All voice acting was appropriate for each of the characters.

Truly what made the anime shine; from Corona herself to Tah and beyond, each character has a distinct and interesting personality and plenty of quirks to boot. Andy is definitely my favorite, with his deadpan expression and hilariously well-meaning (but clumsy and awkward) ways. The motherly puffball is my second favorite, with the always-in-the-wrong-place-at-the-wrong-time Tah being a close third. The characters definitely are the crux of the story, and what makes the anime so entertaining to watch.

Uchuu Kazoku Carlvinson is one of the better comedy anime I've seen. The characters are unique and funny, the animation is fitting, and the story itself is humorous, yet endearing. If you are looking for a short watch, try this one on for size.

What I Liked: Cute characters with distinct personalities and designs. Interesting setting and concept. Uses its run-time effectively to tell its rather sweet little story and present its themes (even the fast-forward doesn't feel out of place). Mother. The soundtrack is cute and suits this OVA down to the ground with its poppy opening and ending themes. Animation is clear and backgrounds are quite lovely to look at.

What I Didn't: NITPICK: Animation hasn't aged all that well. Soundtrack is also very much a remnant of its time.

Final Verdict: Obscure but endearing, Space Family Carlvinson is a sweet and innocuous little OVA from the 80's about a rag-tag group of alien thespians and the young human girl they adopt along the way. The characters are charming in their own ways, with great diversity in design and personalities, and they help to make this OVA an impressive and humorous all-ages romp. Despite it's obscurity, it's worth seeking out if you're looking for something light and child-friendly.