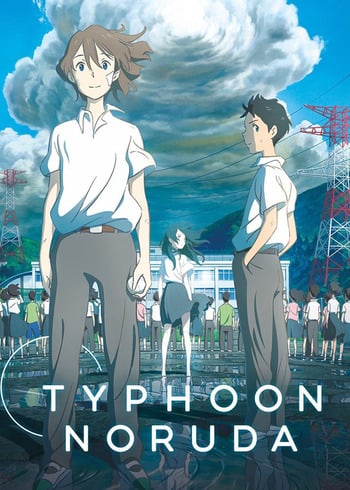 Rumors have it that a monster has appeared over the city, and Yuki would love to catch a glimpse! However, she soon discovers something even more fascinating: a boy named Tetsu not only knows of the monsters, he has a monster pet of his own named Cenco! Yuki is delighted to meet such a creature and tags along with Tetsu to find out more, but soon the two find themselves in the middle of a dangerous conflict with another monster that threatens them and bystanders alike!

Both shows have the same air about them. Random things out of no where start to happen around the people in these shows and they must act not react. Both are quick watches and are gorgeous to look at. Both will probably leave you wanting more too. Check em out!

The "cute love story" follows a fourth-grade boy named Hinata as he tries to convey his feelings to his popular classmate Shigure.

Same studio. Art style looks really similar, story is a bit different.Taifuu no Noruda - 2 friendsHinata no Aoshigure - boy falling in love with a girl and ending up confessing his feelings.Both animes are short, but heart warming, cute and easy.

They're a bit similar in art style, but the main thing is a little message they try to carry over.She and her cat is about caring for each other. That cute fluffy thing loves the girl that's taking care of him, he cares about her feelings too.While in Taifu no Noruda 2 friends who had a fight, becomes buddies while helping a girl.   Art style, short video, and a message they want to leave :)

Both anime are about friendship and that it's important to be honest in order to keep it strong. They touch deeper life subjects that are important in our every day, yet not everyone realizes it.  Simple, but with a little meaning and something to think about

expressing feelings, nice animation, beautiful.Kinda slow or with a little action, but tells a nice story

Fumiko, a timid school girl, shyly confesses her feelings for a boy named Takeshi. But rather than return the sentiments, he apologetically explains he needs to focus on baseball instead! Crying and embarrassed, Fumiko runs away down a hill – but she goes so fast, she can’t stop!

Short anime about two buddies who are close, but get in conflict. They both have their goals and when time comes, they make it up to help each other. Short, cute, nice animation.

Koyama Sachi, a high school girl living in Iwaki City, Fukushima, has been deeply scarred by the Tohoku earthquake of 2011. Since it occurred, she's distanced herself from her friends and family, and shows no interest in people or romance. A violinist since childhood, she's a member of her school's music club and practices every day to prepare for the quartet performance at the school cultural festival. In the midst of all this, she meets Yuusuke, a boy who took refuge in Iwaki after his family was left unable to return home following the great quake, and the two begin to fall in love...