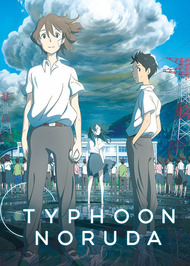 So the main male character, Azuma, decides to quit playing a game he loves for an undisclosed reason that is never fully explained. He gets into a fight with his best friend, Saijou, because he won’t tell him why he no longer wants to be on the baseball team. He sees a girl and suddenly she is all he can see - even in the eye of a typhoon she is all that matters. Her existence is meant to be part of something that can not be properly dealt with within the movie’s run time. It’s like this movie is set up for a TV series or a series of sequel movies that taken together might have had some real meaning and perhaps even provided some entertainment, but as a stand-alone this film falls short. The girl, Noruda, was sent by someone or something to do something to the Earth, she just so happened to land near Azuma and be in pain *cough* need of rescuing. ...yeah the “seen it a zillion times - guy saves girl meeting”. She is responsible for triggering a whole lot of mess for the students unfortunate enough to be on festival prep that day. While the animation has detail you can tell people spent time on, powerful water work that probably took some research, and the sound design might have you thinking the typhoon is right outside there’s not much that stands out or is overly appealing. The story takes place in a school where a class if prepping for a festival so there are a number  of characters with marjinal screen time. Attempting to memorize any of their faces or names will take up the full 26 minutes. Just let them roll by as if they’re bystanders on the street - even if the synopsis says it’s about a class banding together to stay safe during a natural disaster. The focus is on Azuma and Noruda with Saijou becoming more prominent towards the end. The overall message of the anime is about friendship: the last spoken words are from Noruda to Azuma about Saijou. The ending song is nice - the vocal performer did an excellent job - but there were no English lyrics to let non Japanese viewers understand his words. This anime isn’t something to feel bad about not watching or putting on the back burner for a while. If you’ve got half and hour and don’t feel like watching a TV episode or anything else this can fill the time.

No spoilers- My primary critique of this film was its length. At 20 minutes long it was far too short, however the time was used very well. The story follows Shuichi and Saijou at school when a large typhoon makes landfall. And although Shuichi and Saijou were at odds at the beginning of the film, they come together and work really hard to solve the pressing issue; I would have loved to see their stories flushed out more. Aside from the main plot, the music and visuals were refined and beautiful, standing out as the main highlights of this film. Overall, Typhoon Noruda was an enjoyable and quick watch.

Taifuu no Noruda is a short movie. It is contemporary fantasy I would say, the whole story plays out only at a middle school. It starts with Kenta Saijou watching a nude girl fly out of the window. Then there is this typhoon that starts the whole adventure with Saijou, Azuma and that girl, off.Art & AnimationThe art is pretty nicely done, nothing special, but nothing too ugly either. I didn`t see any obviously rendered passages, there were many nice little details. The character-design is nicely done, either, but I like how the girl is shown to be under influence. There is a spacecraft in there, it reminds me of something, but I can`t point my finger at what it is. I think I have seen a similar spacecraft somewhere else.SoundI liked the music it was never annoying, it always guided through the whole thing, and the ending was good, too. At one point I really liked the music, but I can fall into piano-music all the time, that`s a plus. The voices fitted the characters and I liked the fact that Saijou knew who was crying out by the girls voice. StoryWell, it is a fantasy story on a little island that goes on for only 20 minutes. It was fast and it tells a little thing but of course it`s not the story of a whole series. On the other hand I have seen series with much less story in it. There is this boy, Saijou that sees a girl fly out the window and that is in a fight with his best friend Azuma. Later we find out that they are not that far from each other and that they can be friends, still. Saijou finds a girl in a storm and helps her. He finds out she has to do something to the world, even though I didn`t understand if it would destroy the world or not and that she is controlled by her necklace.I liked it, it was the kind of story that is easy enough to tell in 20 minutes but not stupid enough to be not interesting. As I said it is told fastly and doesn`t get boring in between in my opinion but it is a little short.CharacterWell, the characters where only there for 20 minutes, but I think there was a good base with Saijou and Azuma fighting over Saijou not wanting to go on with baseball, while being friends in fact and it gets explained later on why he did it that way. The mysterious girl is nicely done, too, she is mysterious for all the time, I don`t feel like I should know more about her then I do.ValueWell, you don`t learn anything totally new from it. Well you can see that sometimes there is a reason behind a decision, but sometimes it`s just a feeling, too. Like the two decisions Saijou did in this short episode. I don`t think it was wasted time in any way.EnjoymentAll in all, I for myself liked it very much. It was a little short but it was OK. It`s nothing I would show off to my friends on the other hand, but if you like fantasy and short movies, you are totally right here.Sorry for the short review here, but the movie is just not long enough to give any more information without spoilers.