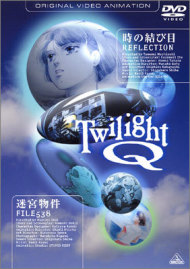 StoryIt's hard to give a solid score to this, because each episode is drastically different, similar to things like Neo-Tokyo, Memories, etc. This was originally supposed to be a set of Twilight Zoneish stories, but ended up being only two. The claim to fame is definitely episode 2 by Mamoro Oshii, but consequently, I really didn't like that one of the two. If I was to grade each story individually, episode 1 would get an 8 in this section, with episode 2 getting a 6 or so. The first episode concerns a girl finding a camera that is supposedly from the future. Essentially, it is a fantastic mystery of sorts, keeping you interested (and somewhat confused indeed) until the end. It truly ends in a Twilight Zone fashion as well. Definitely an entertaining watch. Episode 2, however, is utterly confusing and makes hardly any sense. By the end of the episode I understood the bottom line, but literally the entire time is just a guy talking in extremely philosophical speech that I don't think many people would understand or find relevant. I would give it points for uniqueness, but not for execution, since it was really, really confusing. So all in all, an average score of 7 for the two of them. I highly enjoyed episode 1, not so much episode 2 for the story. AnimationEpisode 1 had fairly generic older animation, but nothing necessarily wrong with it. Colors were generally browns, dark blues, and non-vibrant tones. Character designs looked their age, older. No CG was used, nothing fancy in any way, just fairly normal animation style. Episode 2 was definitely more unique and original, though not necessarily in an eye-pleasing way. The character design of the male overweight lead was a bit grotesque to say the least. I think it was the combination of the wide body, with the very horizontally oval face with horizontally oval eyes, etc. You'd have to see it for yourself.. it was just weird. The little girl also seemed very animal-like and ugly looking. Besides the character designs, almost no animation even happened in the episode! Lots of still images of planes superimposed over maps and such dominated the screen, with the occasional shot of a carp on the counter, in the sky, or in a tank. Definitely unusual, if you like that sort of thing. SoundFairly poor on both accounts, with nothing unique or interesting which caught my attention. Music stayed in the background and was non-intrusive, which is why I still gave it a 6. Standard keyboard fare all around. CharactersThis is another hard one to judge because I am basing the score on several episodes at once. For episode 1, the characters were probably the best, though not a lot of development happened. I think it was because of how interesting the story was, so you became interested in the characters and what they are doing to figure out the mystery as well. For their roles, they fit them well. Episode 2 would be much more poor, as there is essentially zero development at all. The only two characters really are the little girl who has a snot-dripping nose and goes around banging on things, her dad, and a figure who is narrating everything in his philosophical words. None of them are developed at all, nor do they have any set sort of role, so there wouldn't be much of a score for this episode on my part. OverallAs an average score, 6.5 probably works. Episode 1 was quite good, and I'd recommend seeing it. It has a very interesting mystery plot, decent animation, and likeable-enough characters. The pacing is fantastic and it's worth watching at only 30 minutes. The second episode, however, you could skip, unless you are a big Oshii fan. You probably won't get much out of it, and definitely won't be wowed by the animation or anything else, so it may be worth setting aside.