Twilight of the Cockroaches 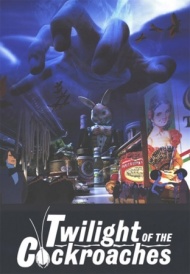 In a trashy bachelor pad lived a colony of roaches who are able to roam freely for food or for games. Because of the homeowner being gentle with the roaches, they have no fear of traps, spray, or being stepped on. However when the homeowner starts bringing over a woman over, life starts to change for the roaches who are already living an easy life.

600 users are tracking this. Log in to see stats.

-Twilight of the Cockroaches: Surprisingly Better Than Expected- When I sat down to watch Twilight of the Cockroaches, I admit, I was fully expecting something hilariously bad. Those expectations were not met. This is a surprisingly good movie, if a bit weird and surreal at times (especially toward the end). It is dramatic, it is emotional, and, perhaps the greatest feat of all, it actually made me care about a bunch of cockroaches.  STORY: 7/10 So, what we're looking at here is, at its core, a war drama. The only twist is that the main characters are all cockroaches. It does take a while to get to the war bit though. The first half is mostly setup. We are shown a peaceful cockroach community, with no fear of being hurt because the human they're living with doesn't really care enough to try to get rid of them. We are introduced to the heroine, Naomi, and her fiance, Ichiro. Ichiro has just gotten a promotion and the two are about to start living the high life. Everything changes, however, when Hans, a cockroach from the war-torn apartment across the field, shows up at their doorstep battered and broken. Everyone wants to hear about this bizarre land where cockroaches live in constant fear of their lives, and Naomi develops an infatuation with Hans. When he leaves, she runs off to be with him, and discovers the terrors of his land, a place where cockroaches are constantly at war with a human woman.    Unfortunately for the cockroaches of Naomi's tribe, this woman starts dating the bachelor in their house, and the war gets brought to them. The two cockroach tribes must unite in a desperate fight for survival.  So, in summary, its a pretty decent, if basic, plot. You've got your conflict, you've got two nations banding together against a common enemy, and you've got your bog-standard love triangle in the middle of it all. It's nothing new, aside from everyone being cockroaches, but it's solid. Oh, also, be warned the ending is (spoiler alert) both tragic and REALLY WEIRD. Lots of death and a talking rabbit idol which may or may not be Naomi's grandmother's ghost are involved.  ANIMATION: 9/10 Okay, so, first off, the majority of the film is actually live action. The only thing that's animated are the cockroaches. But boy, are those cockroaches animated. The animation is extremely smooth and fluid, especially for something out of the 80's, and a lot of the time it almost reminds me of a Don Bluth film. Like, it's THAT level of animation smoothness. Style-wise, the cockroaches are all anthropomorphized, but in a totally non-creepy, non-weird way. They look like something you'd find in a cartoon for children, and they're actually pretty cute. The variety of character faces and body types, especially among side characters, is absolutely delightful. It's very good character design. Something that is hard to pull off under normal circumstances, but even harder when your characters are a bunch of literal cockroaches.  SOUND: 7.5/10 Everything, from the voice acting to the music, is solid, but not that memorable. There were a few very nice instrumental pieces throughout the movie that I would actually listen to out of context, but they were few and far between. I'd say the one thing that pushes this above a seven is how the humans are handled. The sounds of everything they do are amplified and slightly distorted, making those sounds more in line with how a small creature like a cockroach would probably hear them. It was a very interesting choice, and it was very immersive.  CHARACTERS: 7/10 The main characters are solid, but nothing special aside from, you know, being cockroaches. You've got your main character, a pretty standard heroine. Then there's Ichiro, the caring but unexciting fiance. And then you have Hans, the tall, dark, mysterious foreigner. When it comes to characters, I think the best part was definitely the side characters. You have a lot of side characters with different perspectives. You've got the young cockroaches who only know their easy life, the old cockroaches who remember back when they were living in a home with a less apathetic human, and see this new war coming. You've got the leader of the cockroach tribe, who is a peacemaker but a hypocrite and a coward, and among the first to die when he tries to negotiate with the humans once they turn their insecticides upon his people.  There's a ton of interesting side characters. Not the most compelling characters in the world, I admit, and not as much character development as I would like, but at the same time much better than I was expecting. OVERALL: 7.75/10 In conclusion, I came in expecting a really bad movie. I got a surprisingly decent movie instead. Now, I'll be the first to admit, this movie isn't outstanding, and it's not getting any awards. But dang, it's interesting enough to keep me entertained the whole way through, and that's worth something. And, since it's actually decent, I'd say that it's worth watching for its unique concept. After all, how often do you get to watch something from the point of view of a cockroach?