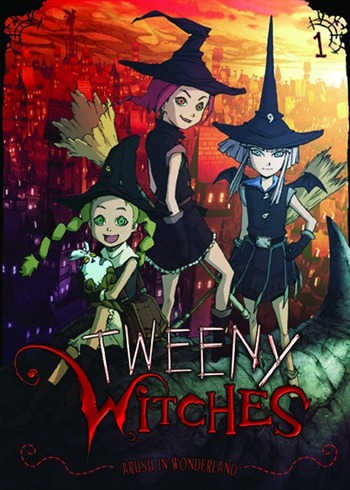 My experience with Studio 4C had been--at the time--fleeting, but I can clearly remember seeing a preview for Tweeny Witches at Sakura-con in 2009. Despite the off-putting English language title, I did feel my heart beat faster and my imagination pique as the sequence rolled. The rich setting and fantastic characters implied a vast, sweeping narrative set in an engaging locale, which suited my escapist anime predilections perfectly; so when fellow reviewer therik asked me to give it as a spin before offering myself up as a TACO prize, I put up no resistance to speak of. What I found garnered a mixed response from me. The whole effort seemed to drown in its own creativity: too much story, too many great visual ideas, and too much scenery. Fortunately, just as the stitched-together narrative appears ready to fall apart, a true fairy tail plot emerges and the series recovers gracefully.

The initial, patchwork salvo of Tweeny Witches covers Alice's abrupt arrival in the magical Witches' Realm and her subsequent acclimation to life as an apprentice witch. Though festooned with trips to exotic locales, slice-of-life moments, and vignettes wherein the red-headed outsider learns about this strange world, the first half of the show concerns Alice, Sheila, and Eva's quest to recapture the 100 fairy species that the three accidentally freed in the first episode. Sadly, the show's stuttering tempo aggravates a situation made worse by a lack of a clear villain or focused goal (the fairies' capture hardly consumes significant screen time).

But the arrival of Sigma and the threat of the Warlocks tightens the narrative up like a ship's lines under the influence of a strong wind. Suddenly, Tweeny Witches deftly juggles a concrete enemy, impending doom, and political allegory all at once, aided by a much-needed sense of urgency. Moreover, time bombs planted during the strange opening segment explode deliciously as the action heats up, helping to force character development even as the plot reaches climax. With so many loose ends, however, the show doesn't have much time to throw any wrenches into the works and has to scramble a little to get all its points across before the wrapping things up handsomely.

Tweeny Witches' creativity bursts from the screen as the animators outdo themselves to bring the vivid Witch and Wizard realms to life. From the strange Mina Fairy to the quirky Dragon House, the anime bristles with clever designs that walk the border between familiar and alien--I particularly love the fairy that was a fish with human legs that continually wears a surprised expression. That the main characters seem to change appearance on occasion doesn't diminish the quality of the visuals here. They all remain recognizable, and the changes represent stylistic shifts that accent the tone of an episode or the dramatic content of a scene. By the end of the series, Alice, Sheila, and Eva achieve a consistent, sharp look that fits well with the climactic finale.

During action set pieces, the show fares just as well as in its luscious stills; imaginative transitions, sweeping pans, and dramatic angles all supplement the smooth motion and well-integrated CGI. Imaginative cuts like the zoom effect used to transition between a conversations Alice, Eva, Sheila, the Grandmaster, and Sigma during a plot-heave episode showcase 4C's music-video pedigree. Though these clever transitions heighten the annoying disjointed feeling of the scene, the novelty overrides any resultant narrative mess.

Tweeny Witches lays its entire tonal range bare in its OP and ED themes. The subdued but sweeping instrumental that accompanies the opening of each dual-episode captures the adventurous and heartfelt spirit of the story perfectly without detracting from the beautifully edited selection of clips from the anime that comprise the visuals. In stark contrast, the "Blue Danube" re-arrangement "DuWiDuWa" found at the end of every two episodes shares the playful and lighthearted outlook of the series' heroine, Alice along with its accompanying CGI of a relaxed journey through the sky.

The Japanese voice cast slides right into their roles with practiced ease. Sachiko Kojima's Alice skips along the razor's edge of youth where optimism, fear, and toughness exist in careful equilibrium and easily outdoes her energetic but less enthusiastic English-language counterpart, Julie Maddalena. Of the remaining cast, only Sigma manages to stand out aurally. Both his English and Japanese seiyuu communicate the young warlock's pent-up anger and ambition, bringing the series' most interesting character to life.

A fairy-tale anime deserves a fairy-tale cast, and Tweeny Witches gets one. The youthful and vivacious Alice bubbles through the anime dispensing self-aware cheese and plot animus in equal measure. As stated in the sound section, the Japanese seiyuu's superior interpretation actually lends her a subtle desperation that rings all the more true in the show's darker back half, but beyond that she follows a standard progression from precocious girl to determined heroine. For their part, the other two members of the magical girl team grow by wrestling their two most prominent character traits against each other on their routes to becoming adults. Kindly but unskilled, Eva wafts through the proceedings, buffeted by the strongest personality in the room be it Alice, Sheila, Atelia, or unnamed villain. The blonde apprentice seems for the most part about as useful to the plot as the stack of pancakes that Alice consumes every morning. Fortunately, Sheila offers a rich (if not completely realized) contrast. Her gruff adherence to duty and reluctant trust for her friends would make her a tsundere in a romantic comedy, but here, it helps her drive events forward and serves as excellent counterpoint to Eva. Even if this series fails to mine her intriguing dynamic with Sigma to its utmost, it's her development that serves as measuring stick for the progression of the narrative.

Of the role-players who mark the secondary cast, Sigma has the most potential. Whereas most members fit comfortably into fairy tail tropes (Wil as the kindly Wizard, Atelia as a gentle queen, etc.) The hot-headed, shrewd, but duty-bound warlock's powerful motivations remain partially obscured for most of the series and make him something of a dark horse. Only Jidan and Lennon disappoint as characters, and primarily because they exist more as plot points than as people for most of the show. Lennon mopes around most of the time, being cryptic and listless, because the story plays his underlying motivations so close to the chest. When the series finally spills the beans and he perks up, his subsequent actions ring a little hollow and forced. Similarly, Jidan, while absolutely central to the narrative itself manages to be neither convincingly the character we expected him to be or the more realistic version that inhabits the story.

As a prime example of an anime that lives up to it's opening sequence, this story features all the action, exotic locales, and plucky heroines you could want. Similarly, the imaginative visuals and "save the world" plot evoke a kind of wonder usually attached to early Don Bluth movies like Ms. Frisbee and the Rats of NIMH. Stick out the confused initial episodes and you'll find Tweeny Witches to be a charming, well-acted fairy tale romp in a fantastic world well worth visiting.

Quick! Think of any Magical Girl anime you have ever seen. Got the image in your head? Perfect, let's continue.

Story: As with a lot of magical girl anime, the protagonist suddenly finds themself in the middle of a battle to save the world. Why? Well, because she was destined to save the world, that's why! Mahou Shoujo Tai Arusu takes that archetype and adds "the protagonist just falls into the world". Literally. Along with learning to use her new found powers, Arusu spends most of the anime turning the Witch World on its head. Like Alice Through the Looking Glass... with witches.

Animation: In true Studio 4C style, the animation is rather quirky. While the main group of characters are rather detailed and interestingly designed, the side characters are all blobbish, unfortunately looking creatures. The fairies and world settings are something Tim Burton might have pulled from his twisted mind, and that just adds to the ambiance of this anime.

Sound: All I can say, is this music is what I imagined everytime I heard a fairytale as a child.

Characters: Apart from the unfortunate looking creatures (aka the side witches who don't matter to the plot), you have the "Magical Girl Team" and the head witches. The team consists of powerful, headstrong Arusu, ditzy Eva, and bossy, strict Sheila. Sound similar to that magical girl anime I had you think about earlier? It should.

Overall: Looking for a good fairytale? Cute and sweet with the power of friendship? This is for you.

This quicly become one of my favorite animes ever. It has charm and a uniqueness all it's own.

If you like magical girl stories were they are thrust into another world then you will love Tweeny Witches. I lvoe the mystery that surounds it too and the imaginative stroryline and workd that goes with it is just remarkable.