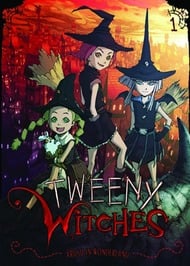 Alice is a preteen girl who believes in magic, much to the dismay of her parents and peers. But when she finds herself transported into a dreamlike world filled with magic, forest sprites, and witches, she finds out that magic is sometimes not all it’s cracked up to be. The witches of this world must capture forest sprites for use in casting their spells, and magical hierarchy dictates that those at the bottom must compete to get to the top. Dream or not, Alice must use her positive attitude to show these witches that magic should be used to spread happiness, first and foremost!

Quick! Think of any Magical Girl anime you have ever seen. Got the image in your head? Perfect, let's continue. Story: As with a lot of magical girl anime, the protagonist suddenly finds themself in the middle of a battle to save the world. Why? Well, because she was destined to save the world, that's why! Mahou Shoujo Tai Arusu takes that archetype and adds "the protagonist just falls into the world". Literally. Along with learning to use her new found powers, Arusu spends most of the anime turning the Witch World on its head. Like Alice Through the Looking Glass... with witches. Animation: In true Studio 4C style, the animation is rather quirky. While the main group of characters are rather detailed and interestingly designed, the side characters are all blobbish, unfortunately looking creatures. The fairies and world settings are something Tim Burton might have pulled from his twisted mind, and that just adds to the ambiance of this anime. Sound: All I can say, is this music is what I imagined everytime I heard a fairytale as a child. Characters: Apart from the unfortunate looking creatures (aka the side witches who don't matter to the plot), you have the "Magical Girl Team" and the head witches. The team consists of powerful, headstrong Arusu, ditzy Eva, and bossy, strict Sheila. Sound similar to that magical girl anime I had you think about earlier? It should. Overall: Looking for a good fairytale? Cute and sweet with the power of friendship? This is for you.

This quicly become one of my favorite animes ever. It has charm and a uniqueness all it's own. If you like magical girl stories were they are thrust into another world then you will love Tweeny Witches. I lvoe the mystery that surounds it too and the imaginative stroryline and workd that goes with it is just remarkable. 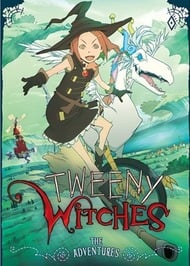