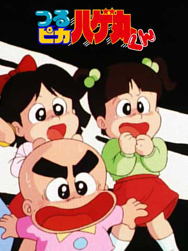 Ryoutsu, being an underpayed policeman, is always coming up with ways to make some quick money. But in the end, his plans which are ridiculous from the beginning always go wrong and land him in big trouble with the Buchou.

Romance is not in  this.

Robotic cat Doraemon is sent back in time from the 22nd century to protect 10-year-old Noby, a lazy and uncoordinated boy who is destined to have a tragic future. When Doraemon arrives and tells the boy about the misfortune that awaits him, Noby commits to changing his ways in an attempt to improve the future for himself and his descendants -- including great-great-grandson Soby, who was the one who sent the robot back in time to help. Doraemon is able to create secret gadgets from a pocket on his stomach to help with the situation, but they usually cause more bad than good because of Noby's propensity to misuse them.

Pretty much slice of life (well Doraemon it is slice of life if you believe in robots and time travel) But Kid friendly shows with male protagonists.

Hagemaru has a main character that looks like a mix between Charlie brown and Krillin from Dragon Ball.

Lots of luck finding it subbed.

Of the episodes I found, one of them, our male protagonist trades places (spirit wise) with his teacher. Goofy Hi-jinks abound. In another a kid younger and smaller than him is in the class.

needless to say, if you saw this because you are trying to learn Japanese, watch Doreamon. It is more a classic and even as a children's show, I feel Doreamon offers more to the many generations in Japan that have watched it.