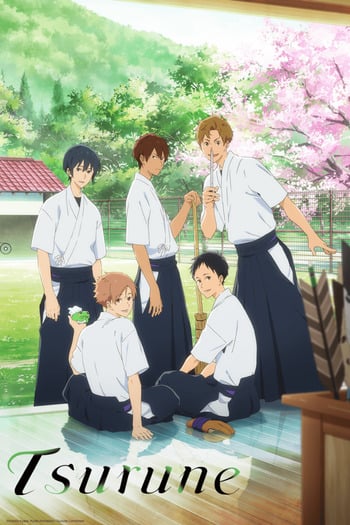 This was a nice short sports anime, and it was an easy watch.

I quite liked the story, which is about high school Kyudo (Japanese archery), and the trials of all its members throughout their first year of high school and the competition season. The main character, Minato, has to work through his own issues with anxiety and love of the sport.

The animation itself, and the sound were great. The animation was very smooth and fluid, and I just really enjoyed how the sport and the characters were portrayed.

I liked the different team member interactions and personalities; it was different to have such opposing personalities on the same team, unlike some of the other sports animes I have watched. Despite their differences, they still manage to have a fairly good dynamic between them all. I would have liked more development of the female team members, because they didn't get much screen time.

Overall I really enjoyed watching this anime, and I'd probably watch another season.

So if I were to describe this anime in one word, it would be the word "bland". The message, the characters and problems were all normal, nothing special just like any other short sport animes, which frustrated me. I don't have time to watch this boring anime that aires every season and you don't even remember that you've watched.

If you are new to sport animes, tsurune is a great choice to get started, the animation was gorgeous and it is an easy watch. But for me it was a real struggle, starting from the first episode I just knew where it was going, I got the general idea( and I should have just dropped it) but I just kept watching it, pushing myself because the animation was just stunning. Also the other thing that kept me entertained was the twins and Shu's face( his characteristic was bland as hell like the others).

Overall it was a solid safe anime but I would not recommend to watch it.

A lot of people may like this kind of stories, I do too when its implemented properly, with a good train of thought and a decent amount of chapters, which was not the case on this story by any plausible means.

This author was either rushed by the publisher to release content no matter the low quality or the anime production company put too much pressure on a "good idea" that had no "real clear direction defined" while not yet finished or even started to begin with.

The concept of this story is really good in my humble opinion but was implemented poorly, as said above due to either over rushing of the author by the publishers or anime production teams or simply has no talent.

The animation is decent, is neither amazing nor bad, but in general, is properly done, so if I'm objective here its a good animated show, so no comments on this aspect, a good rating is given where deserved.

Neither good nor bad, there were no flaws but no flair either which is why I'll value it above "half and half" but that's it.

With the potential of being great, the overuse of cliche and over-convolution of the story, the development of the characters is a hundred percent invisible, and only happens "in the last chapter" rush, so there is no essence, no depth nor any relatability to ANY of the characters on this story, so it doesn't deserve even the 1/10, I'd go in a 0, but that's well not fair either, so as lowest possible to "amount" a proper evaluation, 1 is the highest I could possibly give to this awfully implemented "AMAZING" idea and character development.

This anime had me wanting more at the end of each and every episode. I loved the beautiful animation and sound design. To be honest I would not another season. I think the way it ended was great, every thing was tied up neatly. I always try to get one slice of life in each season and I was very pleased was not disappointed.

The first things you really notice about Tsurune are how great it looks and sounds. This is despite the fact that, for a sports show, Tsurune is quietly-paced and shines a bigger light on the athletes instead of the sport. And it makes sense too: kyudo, or traditional archery, is a sport that demands patience, focus, and discipline, which is why it’s great that the series was able to properly relay all these qualities through its technical aspects.

If only the same could be said for everything else.

Tsurune starts strong: when we begin the series, we meet main character Minato, a former promising archer who is now dealing with target panic and can no longer hit the targets like he used to. It’s the same kind of slump you normally see in other athletes, and it’s hoped that, through Minato’s forced return to archery, he’ll regain his form and learn to love his sport again. The premise is already plenty interesting on its own, so you’d think the show would be careful enough to avoid rushing through things and go off-tangent. Unfortunately, that’s exactly what Tsurune does, so despite its amazing technicals, it still manages to bog itself down by neglecting its more important facets.

The main draw of this series’ story was supposed to be Minato’s resolution of his target panic, but Tsurune wanted to over-complicate things by introducing all sorts of additional plot details that initially looked important… only for the show to breeze its way to the conclusions, so most of these issues were glossed over and then thrown to the wayside. The result: conflicts that were originally there to give depth to the characters and the story became completely unnecessary, because of how quickly they were resolved. Most of the time, Tsurune drama’d for drama’s sake – so much so, that it begun to resemble a classic soap opera at several points. The characters didn’t fare much better either: if they weren’t Minato’s teammates or coach, then they were just one-note personalities with none of the character quirks that were hurriedly tacked onto the main bunch to give some semblance of depth.

It would be too much to call Tsurune a complete misfire, because it isn’t. Despite everything, it’s the stand-out technical aspects that make this look like an attractive draw for any viewer looking to avoid the other cliché-ridden sports shows. In the end, however, it’s due to its character and story fumbles that Tsurune becomes the archer with solid form and a good eye on the target – but because it doesn’t allow itself to breathe, its shot veers off-course and misses the bullseye by a wide margin.

Minor spoliers included! Anime only, I haven't read the novel!

In Tsurune, we are thrust into the world of Kyudo, the Japanese martial art of longbow archery. The passion for this martial art really comes through, and it's an enjoyable watch to see our main character, Minato, face his tribulations to reclaim his love for it. The main issue I have with the story was in regards to the development of characters (see Characters below). 8/10

As with most anime by 'Kyoto Animation', Tsurune is full of very beautiful animation. This is consistent through out the whole anime, with some absolutely stellar shots as a nice surprise. Tsurune really uses animation as a medium to tell a story unique to a sport like archery, with beautiful shots of slow-mo flying arrows and flowing hair. The background is consistently charming in it's portryal of the orindary world, but no less pretty for it. Character design was also very well done. There were definitely times when the animation took my breath away. 9/10

The main characters we get to know are the boys from the Kazemai High School Kyudo Club, namely, our protagonist, Narumiya Minato as well as Takehaya Seiya, Yamanouchi Ryohei, Kisaragi Nanao and Onogi Kaito. Each character is distinct and has their own time to shine. However, the character development that occurs seems quite fast. This is due to the short 13-episode nature of the anime, which doesn't lend itself to giving each character the time to develop properly. Considering the emphasis put on teamwork, especially in the second half, it makes this theme seem slightly superficial.

Other significant characters include the team's coach, Takigawa Masaki and the club's teacher, lovingly referred to as Tommy-sensei. There are also three girls on the Kazemai Kyudo team, and I wish we could have learnt more about them! Minato's childhood friend, Fujiwara Shuu, serves as a sort-of rival, and all though we don't too in depth into his character, the traits he does display I found interesting, especially with respect to Shuu's attitude towards Minato. The rest of the rival team didn't really have the time to be properly introduced, but we did meet some quirky characters. 7/10

I quite enjoyed watching Tsurune, and going through Minato's journey with him. It was a visual pleasure, and fun short anime to watch! 8/10.

My first time seeing an archery anime, and as it turns out, quite an enjoyable one!

Story- The story focuses how Minato, the main character, who has fallen out of a sport he once loved, and the process he goes through to get back into archery. And at the same time, its also a journey for the archery team as they learn to overcome their problems and work together as a team.

Animation- The animation feels smooth from the every day life to the shooting of an arrow as it hits its target. The design of the characters feels natural and gorgeous to look at, not in a way that feels overdesigned.

Sound- From the pulling of a bowstring to the barking of a dog, everything feels well timed.

Characters- I think one the best parts of the show is how the main cast of characters are portrayed. We have Minato, Seiya, Keichan and all the other guys. Whenever a problem shows up for the character, its not easily resolved and some will pile up before the characters can solve it. It feels realistic and also belieable in a setting that feels relatable to real life. And Minato reached that point of growth with his character that felt so satisfying. One of the best highlights of the anime.

Overall- Part of the reason why I'm satisfied with the anime is because it got the bad taste out of my mouth that the Badminton 2018 anime gave me. You need a protagonist who feels human, who has felt failure, but also follows their own path and is able to come back on their own two feet without coercion. That is what Tsurune did right in opposed to the Badminton anime. Its my hope that people can give this series a chance cause I was impressed!