Yuki is an introverted teenager whose intense fear of public speaking makes it difficult for him to make friends, so hoping for a fresh start, he moves with his grandmother to the small island of Enoshima. Shortly after his arrival he encounters Haru, a strange youth claiming to be an alien - and what's more, the otherworldly visitor requests his help to catch a strange being that inhabits the local waters! Along with fellow classmate and local angling celebrity Natsuki, the boys must now form a bond in the hopes of saving the town from the force that is threatening it. With a mysterious organization also lurking about and posing potential danger, Yuki must put his best face forward and protect the island... with the help of a fishing rod?!

The first episode of this anime set my expectations of this anime way too high. I was really amazed at the animation, vibrant colors and detailed backrounds of this anime. It was like nothing I had seen before and so it really effected my viewing experience of this. Maybe if I just expected a typical bishie, fanservicy anime with no real plot ,my score would have been higher, but yeah what came after this was just a complete mess. *spoilers ahead* Story- The story is about these four guys who fish... yeah >_> Oh and one of them is an alien and his ancestor is in the sea and causing ships to steer off course and they can mind control people with water. So yeah its a slice of life so they just do slice of life things and learn about fishing. Most of the episodes are just episodic and don't really add much to the main "plot" the last few episodes are just filled with plot holes. Like just for an example it goes something like first Haru is an alien and then hes actually a magical fish lure and this organization that worships ducks(parody of Hinduism? Really Japan? I infer this because we can assume that all the characters are indian/middle eastern because they wear turbans, but the main reason for wearing a turban would be if your part of the sikh religion and they would know this if they did even a little bit of researth >_> gah I don't really want to get into this) The dragon alien ancestor thing just turns out to be this giant blob of black cg and then he turns into another bishie and everyone becomes his best friend and yeah... Animation- The one redeeming thing about this anime. The backrounds especially are very detailed and vibrant colors are used to really bring it to life. This design was really unique to this anime and it was nice to look at. What wasn't nice to look at however was the CG used in the latter episodes, in the water and with the fish and the alien dude. Also the char designs are very simple and kind of boring. Apparantly pink is a really popular color for guys to wear in Enoshima. Sound- Haru's voice.... yeah, if you've seen this you know what I'm talking about. A lot of the time it got so annoying I just muted the vidoe and listened to other music. The op and end themes are pretty generic J-pop stuff and the OST didn't really stand out for me. Characters- Haru is so frikin annoying. I was constantly wishing someone would brutally murder this character whenever he was on-screen. His sister is not much better, she pretty much does nothing throughout the seris and is just there for fanservice, since she doesn't seem to have any other clothes besides a bikini. Yuki is another one of the main characters. I liked him at first but as the series progresses I feel like he turns more into the stereotype shounen/bishie anime guy thats just really positive and all "YEAH HELP MY FRIENDS!". Prince is another one of the mains and he just plays the stereotype of the "cool guy" he has some problems with his dad because he remarried, but I feel like they never really developed that well, instead he just learns to get a long with his sister again. Then theres Yamada... oh Yamada. This is actually favourite character in the series so its such a shame that he has to be portrayed as such a stereotype of Indian/Middle eastern culture due to a few things like the turban, which makes little sense. Hes shown eating curry more than a few times throughout the series and for some reason he likes to use engrish. The Duck organization is just one big joke, but my most hated character is this tan, blonde pink shirt guy that all the MC's in the show respect for no reason and he keeps calling Yamada, Indian like its some sort of insult. Honestly he acts like a jerk and hes supposed to be good at fishing but we never even see him fish and at the end of the series he gets married to one of the shop keepers and everyone is happy, but I don't understand why anyone even cares about this guy.Also its alluded to in some episodes that Yuki's grandmother may have some sort of illness and pass away, but that never happens and shes just as healthy as ever at the end of the series. Also we are led to believe this blonde guy who dresses in drag is the leader of Duck but then this old guy with a beard comes out of nowhere in the last ep and hes the actual leader... which I felt was completely pointless. Overall- I know this review is biased, because I had my expectations high, but I really felt let down with this series. I'm sure theres an audience for this sort of anime, however it really wasn't for me. I guess my advice would be don't get your hopes too high for this anime.

Story Tsuritama's story is truly absurd.  Absurd in all the right ways, that is.  We are presented with Yuki, a student who transfers school consistently where he eventually lands on Enoshima.  Here he meets Haru who claims he is an alien.  But there is some credit to his story.  Haru holds in his possession a little plastic water gun that, when fired, has the ability to control whomever the water hits.  That's not all.  There's a fish in the ocean that is so powerful that it can control human beings and force them to dance.  Why the fish wants them to dance is beyond me but I find it cute and adorable.  The only way to stop this fish?  Fish him out of the water and that is the ultimate goal of the main characters Yuki, Haru, Natsuki and Akira along with the rest of the supporting cast.  I thought that this story was excellent.  Consider me a sucker for the absurd but I was truly impressed with how well the story was executed.  From the heartwarming relationship between the characters to the recurring theme of fishing.  Fishing is what brings all of the characters together and is a prominent theme in the anime from the very first episode.  An anime about fishing?  Absurd.  And that is why I love it. Animation The animation in Tsuritama is excellent.  Tsuritama features bright, popping colors that is truly a sight to behold.  The landscaping is very well done as well and I truly felt as though I was visiting Enoshima and viewing all of its beauty.  Everything down to how the characters moved and danced was done exceptionally.  In short, the animation was beautiful.  Sound How could anyone not be in love with the music in Tsuritama?  I found myself dancing the "Enoshima dance" several times as the opening credits rolled.  The opening theme was called Tsurezure Monochrome by Fujifabric.  If you have not heard it I strongly suggest a Youtube search.  The music that played during the anime was apt as well.  Everything felt put together smoothly and I was never distracted by it. Characters This is where this anime shines.  The characters.  The relationship between the main characters and supporting cast is excellent.  The four main characters band together to learn and teach each other the ways of fishing.  While it took a while for Akira to really shine I could understand why he was portrayed as a main character although at first I was extremely confused as to why he was portrayed as a main character in the opening credits.  But Haru is the real champion here.  He may be an alien but he learns to be as much of a human as any of the rest of the characters. Overall This anime was excellent.  Everything was done, in my sense of the word, damn near perfectly.  I would strongly suggest this anime to anyone who has a heart as Tsuritama will be sure to melt it. 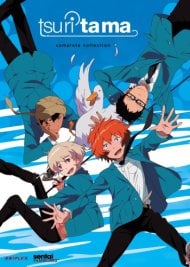 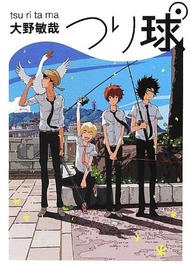