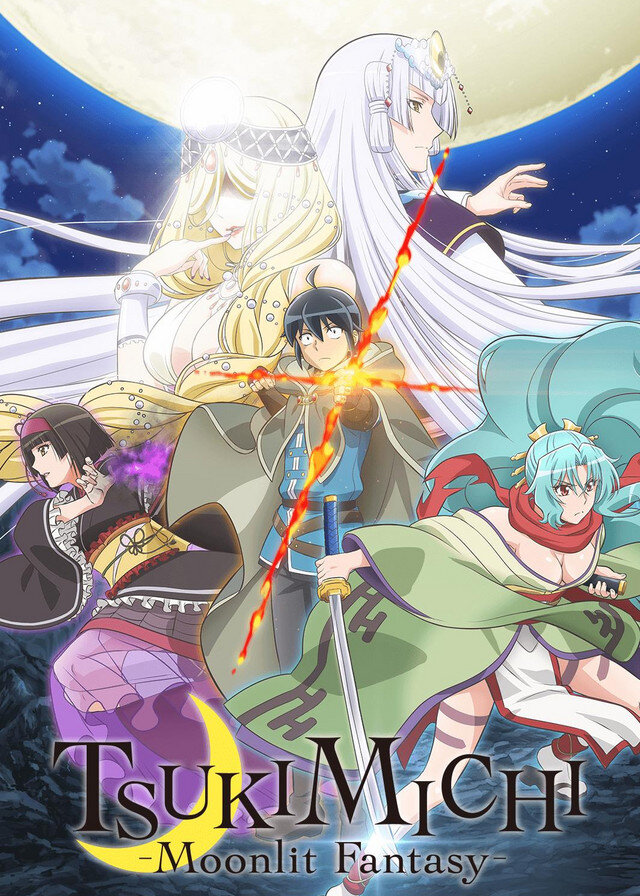 idk what all the hate is , i found this isekai much better than so many other trashy isekais out there, ig maybe cause it failed somewhat in the comdeic art idk. i had very low hopes for it at  the start so maybe thats why i found this show a little good. its comdeic timing is terribe at times but its prety decent. not bad not very good its just about hvering above the average line

SO... This is basically the Slime anime but worse. The premise and quite a few story elements are exactly like Slime.

Following this, we just end up as generic Isekai / Harem anime. The MC here saves girls and of course, all the women find him very attractive. MC uses his magic OP powers to solve all the problems.

Look this is TRASH but it has some fun elements to it. Some interesting characters and the direction of the story is unique enough to keep your interest. The whole idea of a demi-plane subspace is unique. Watch it for what it is, A Trash Isekai Anime.

It has weird anime girls forcing themselves on the MC just because he's OP troupe. If you don't like that, just skip this one.

So far the MC doesn't have a loli child bride in his harem. So I guess that is now considered a plus point in anime.

My sincere apologies for my initial review. I had initially accused this anime of being a rip-off of "That Time I got Reincarnated as a Slime" But have now realized that was completely wrong. Tsukimichi came out 1 year before Slime and honestly at this point you could argue that the plagiarism was the other way around.

Isekai anime/light novels have been copying others so much recently that I falsely assumed that was the case with Tsukimichi.

Consider that this light novel is from 2012 and is not a rip-off of Slime. I have removed all accusations of Plagiarism and have updated the score to better suit the story. That being said this is still an Isekai anime something that we have seen time and time again. And despite it being an OG LN it still is not anything to write home about.

Compared to other isekai, comedy plays the main role in this show. So whatever happens in the story the conclusion will never appear. Our ML is manly enough, the females are cute enough and the story is a sandbox.

Although we do get the information to why he needs to be isekaied but it got dejected early on what gives him the possibility to freely explore the world while expanding his influence on the world itself. Of course we have a hidden love plot in the case of a girl who got dejected by our ML before the transportation, accidenticaly the same girl was choosen as the next hero by the goddess. So i guess U can figure it out, bcs our ML feels bad about the rejection. Beside that the main issue of his existence is the Goddess, she finds him ugly and irritaiting. What makes it even more troublesome is his development. At some spot he might rise as a threat to her. So the endboss is set early on.

I do think it's one of the better ones in case of Animation. It's almost vivid and fluent. The dialogues are thorough characterised as to give the feeling of japanese style. Sounds like 'haiku' to me at some spots what differs it from the manga adaptation. So there is effort behind the script in the anime.

The Sound, it's ok. Epic attacks have a good vibe and bass level, every Voice Actor/ess sound good.

The Story, yeah. It's a very god isekai with some originality, IF U are into isekai.

To sum it up. It's definetly a decent anime with some good stuff. The additional work compared to the manga earned my respect. You should at least give it a try.

Oh, isekai. It is so nice of you to always be with me, when I need salt. You think I am trolling? Then, you perhaps do not know that salt in your body actually keeps you alive: it is responsible for the circulation of all fluids in your body, including lymph and it also helps your body get rid of CO2. Useful stuff! But too much of it, might be responsible for high blood pressure. So careful with that, do not say I never warned you.

Tsuki ga Michibiku Isekai Douchuu focuses on an ordinary high school student, Misumi Makoto. He is summoned to another world, where he becomes a hero and is to save the world from an inevitable destruction. Upon arriving in the new world, he is met by other heroes, who are not that pleased to see a newbie hero. Being in the new world, without the help of the God that made Makoto a hero, he will need to find his own way to save the world.

Speaking of the story, it is way too simple and it helps the viewer to enjoy it, because it is just one of these anime that are great to kill some of your free time and where you do not need to think that much. Nothing really happens in it, there is almost no drama, or anything shocking going on, so you can just enjoy it without needing to overanalyze the story. However! The anime does have a very bad and cliché start and while it does get better and better, the more you watch it, the more flaws you see. There is no drama in this anime, which would give this series a bit of a spice and make it just more interesting for the viewer. There is nothing bad in that, of course. But having seen the same thing over and over again, at some point, you just get tired of it and the reason for that is that this anime does not have anything new to offer, more than that, many of the anime’s elements you have already seen countless times: an overpowered hero that is an ugly looser in his previous life, he gets isekai’ed to a parallel universe, where he immediately gets all the beautiful girls, but is too bloody stupid to catch any of the hints that the girls are actually sexually attracted to him, obviously, I do not even need to mention it, our protagonist is God level strong that is why he, with the help of his servants, creates a village in the alternative dimension, where he allows to live races that he meets during his journey. On top of that, two of his servants even ask Makoto to name them, etc, etc.

This list can get on and on, but there is no point in it. Do not get me wrong, clichés are not bad at all, but you are supposed to work on them a tiny bit, to make them less bloody obvious. And with these clichés, the storyline, where absolutely nothing happens and if something happens, you already know how it will end, which makes the whole series bloody torturous to watch. Even if you were to assert that Tsukimichi: Moonlit Fantasy is just a parody on isekai and harem series, there is nothing funny about it at all. I mean, even if the anime’s main genre were comedy, as a comedy, it is just pure garbage.

The characters are not that bad, but they all lack character development. What I mean is that just like with many other anime, Tsuki ga Michibiku Isekai introduces too many characters and little by little this becomes a problem, simply because there are just too many names to keep in mind, these characters hardly have any impact on the story and are just later on completely forgotten and it just feels that the anime does not have a unique and interesting character that will retain in your memory for more than 10 minutes.

I am disappointed, to tell you the truth. Like I said, it did have a bad start, but then it became watchable and I would I even say that it was entertaining. However, then you just keep collecting the flaws and, at some point, you cannot enjoy the anime anymore: the main protagonist is yet another potato that is just too much of a dumbo to get any hints of his fellow female companions, or he might suffer an erectile dysfunction, does not matter, the original creator has no idea how their anime should look like, many characters are just neglected and receive little to no development and so on; I can make this list endless and if you think that novel does a better job, it, indeed, is better than the anime. But it retains far too many of the anime’s flaws and, while great at first, it becomes average near the end.

All in all, if I were you, I would never watch this anime. Yes, the source material of this anime was the first to introduce many ideas that you could have already seen in That Time I Got Reincarnated as a Slime, but what I wanted to see was not just yet another That Time I Got Reincarnated as a Slime with slight changes, but a completely, well, somewhat unique anime, which I did not get. Tsuki ga Michibiku Isekai Douchuu does not have anything unique about it, but if you are just an isekai enjoyer, gotta watch them all type of a fan, this might be a good watch.

This is in the morning as I wake up so my review won't be very high quality, so I'll try to just list some problems rather than trying to go on a full review. Mildly spoiler-ish but not really? The plot is largely boring and loosely connected so there's not much to spoil anyway.

He projects so much mana that people fear him so hemust wear mana absorbing items, but they aren't strong enough, and somehow the people don't run in fear still? There are many other inconsistencies as well.

He and his companions have enough strength to control the entire world. There is quite literally no problem they ever have to face. They conveniently run into ingredients they need without even trying, no enemy is strong enough to stand up to even one of them, and the enemies never try anything clever to overcome the power gap.

It falls into the trap that literally every piece of media falls into by assuming that warriors are meant to be strong fighting on their own. Maybe that's true when you're level 1400, but combat in groups is meant to focus on how the group can act as a unit. It's an overdone cliche that I just hate seeing. The average warriors of the illusory city should not be trained by a dragon that only fights on its own.

And of course the only people he personally interacts with are women. He even gets debt prisoners who are in and out of the show in a blink.

Overall I'd say this show is believably bad, but not unbelievably so. It's a brainless power fantasy isekai with the entire world designed to cater towards this one child. I'd say it's almost as bad as The Master of Ragnarok & Blesser of Einherjar, but at least it doesn't look or sound horrible. I can hope the last few episodes make up for it, but anyone who's seen even the first episode knows exactly how this will go.