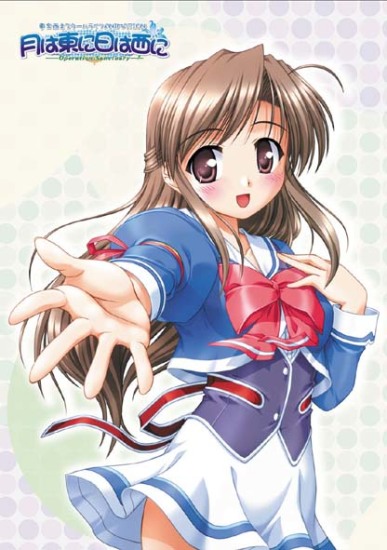 Ever had the urge to stick your face through a meat grinder?  If so, might I suggest giving Hani Hani: Operation Shi-...Sanctuary a whirl.  Save for the physical disfigurement, the two feats actually share a remarkable number of similarities, including the requirement of a masochistic personality to be able to suffer through either experience.

Like all its filthy ilk, Hani Hani bombards you right off the bat with all the necessary harem events - girl-of-the-day episodes, a pool trip, and a bit of the typical, bland ecchi humor.  Since each episode only happens to be ten minutes long, however, these events are packed with horribly trite and lame dialogue; while I certainly found this a good thing since it helped me get the damn thing over with quicker, it did nothing to promote any semblance of quality.  I've suffered through these exact same events with virtually the exact same characters time and time again, and the fact that not a single aspect of it proved remotely original testifies to its utter worthlessness.

Oh, but it certainly tries to be original!  Without "spoiling" anything (it all happens at random anyway), the series spins off on a remarkably eclectic tangent in its last few episodes; think quantum physics, pestilence, and Al Gore actually deserving the Nobel Prize.  Yeah... needless to say, it doesn't work.  At all.

It may be a 2004 production, but the animation totally sucks; it could easily pass for an early to mid 90's series.  Aside from an assortment nice scenery shots, just about everything from the character designs to the actual animation is horrendously tacky and grainy.  Noses and chins run together with a single straight line, jaws come together in a bayonet tip, and the girls spend half the time staring blankly into walls making unanimated ":D"  faces (with disproportionate mouths, of course!)  Hell, while watching I kept thinking they were waiting for some random gag to happen in the background, so you can only imagine my disappointment when the Kool-Aid guy failed to make a single appearance.

I have to give it some credit, though - the last two episodes actually look fairly nice.  Perhaps they dumped half  the budget on them, but even then suffering through ten episodes of garbage visuals for two episodes of decent ones is not worth the effort; call it a hunch, but my suspicions are that these scenes were ripped from the game in some fashion, so just play the game if you really like the screenshots.  In addition, the pitiful budget didn't seem to allow for panty or breast shots either - actually incorporating fanservice over stills would likely have bankrupted the series six episodes in.

I swear there are about twelve tracks for the entire series, and all sound as if directly ripped from the game.  None of them really fit, as their cheap production value is enormously apparent, especially since not once does the music ever seem appropriate.  For the first few episodes the same tracks are repeated in virtually the same order for the same types of scenes, and I must say it gets annoying real fast.  Some of the girls, especially the red haired one and the cousin, have horrible voices to boot, so it makes the series a real ear sore at times; even the main guy's voice sounds like he's genetically congested, and he's likely the best seiyuu.  Hell, it wouldn't surprise me if the same actors voiced multiple characters - the whiny voices all sounded the same to me.

Let me tell you, it's a horrible sign for an anime when I can watch the opening credits and pick out the girls and their personality clichés before even being introduced to any of them; what's even worse is when I turn out to wrong and they suck even worse than expected.  Hani Hani flaunts not a single interesting character, as all are generic, bland, and copy-pasted from "How to Make a Shit Harem - Deluxe Edition."

Seriously, just take one glance at the cast and you'll see what I mean.  There's the random girl-falls-from-sky dolt who has an uncanny obsession with crying over how much her friends (whom she just met, mind you) mean to her; the quiet librarian-type girl who has a onii-sama complex going with the male lead; the loudmouthed cousin who always claims the male lead is a pervert; the super amiable childhood friend who is in love; I could go on forever.  Even the teacher looks and acts like a student (or worse), not to mention the nurse seems to have some unhealthy obsession with the main guy as well.  Ultimately, I could only really tolerate the main guy and, to some extent, the childhood friend - they were the only two who possessed an average amount of intelligence; and trust me, average in this series is saying a lot.

And I won't even begin to try to comment on the "revelations" each of the characters undergoes; I think Ms. South Carolina could have narrated the events better.

For the love of God, somebody explain to me why I watched this.  I could have done something more productive with my time like bludgeoning my face in with a baseball bat or back-flipping off a five story building.  In fact, I was probably most entertained in the brief downtime between episodes.  Seriously, unless you feel like torturing yourself to atone for shooting your neighbor's cat with a pellet gun back in middle school, stay the hell away.

The story began fast introducing us to the characters and background but after that, it slows down. It becomes closer to a romance slice of life. I wasn’t expecting the pace but I personally liked the pace. Some of the topics though were confusing since it took so long to be revealed. They should have used more time to explain the future. The ending scene mostly should have been expanded upon. It was really quick. I am glad though it was not an open ending. After watching it all, though, I still do not know where the scars on his back or her wings come from. That was never explained. Why the teacher is a loli is also not explained.

While still bland enough to be harem characters, each character did have his/her own personality. Mcs guy friend excluded. The series explored each of them and showed us their relationships with each other and the Mc. We learned how he perceived each of them. We even got to see the end result and he chose one which is uncommon for the genre. The brother aspect though was also explained in too little time which made it slightly confusing and he seemed like an unneeded character thrown in just for plot. The anime though does not show the other harem members reactions to the choice of the Mc which I would have liked to see

Animation normal for time period. Hanabi Not especially good or bad. Not like 80’s anime bad nor konosuba good with expressions. Jut all around average.

Sound was average as well. They could have talked more about love and long term happiness