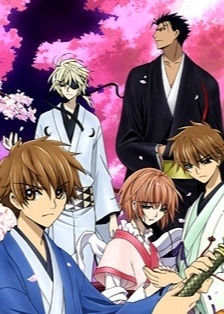 *Note: Watch only if you have read up to this point in the manga, otherwise, expect to be confused and face major spoilers in the series.

*Slight spoiler alert discussing where in the manga this OVA takes place.

Story: This followed true to CLAMP's Tsubasa Reservoir Chronicles right after the situation with Ashura followed by the battle between the two Syaoron's. This was a faithful adaptation that was easy to follow or was easy to follow as CLAMP"s work can be and was wonderfully paced. There were no filler moments or anything slowing down the pace. The 2 episodes covered quite a bit of ground and had suspense through and through with action, romance, suspense, magic, and even a major plot twist. Some questions were answered while new ones sprung forth, leaving me wishing for more. If you loved the manga, particular this arc, or the anime, this will be highly satisfying.

Animation: Gorgeous, absolutely gorgeous. The colors and design for both characters and background was exquisite and detailed. Everything was cleanly animated with wonderful detail given to expression, character design, and the atmospere of the scene. For example, the cherry blossom in the real world was beautifully aimated with such care taken to each petal on the tree and every petal that slowly fell to the ground or drifted about due to light wind whilst the dream world was drearly cloudy with the fluttering sakura petals almost glowing with their sweetly pale pink in constrast to the dark background. All aspects had such care that nothing was really lacking in any part of the scenes. The movement and fluidity of action was just breath-taking. Never have I seen such gracefully and smoothly executed movement that continued at such a fast pace without ever becoming blurry or choppy. The manga wonderfully came to life in such a beautifully stunning manner. I actually could not find a fault with the animation.

Sound: As wonderful as the original Tsubasa anime series. The soundtrack remains the same for the most part except for a few new pieces that were rather unnecessary but did not detract from the scene so the sound remained impeccable. The opening was lovely and memorable while the ending was nice but not quite as notable. The seiyu's did a great job as usual.

Characters: The development of the already unique characters was palpable. Their growth and understanding of their flaws and what they need to do in such a tragic and dire situation was brought forth. The change from the beginning of the series was transparent and nicely shown. All the main characters displayed such wonderful development while retaining their individual personalities. The sacrifices they made and how they intended to continue forth on their journey was so beautifully and carefully addressed. Their talk with Yuko and even how others addressed their changes showed how they have evolved from everything that has happened. All the main characters are memorable, distinguishable, and were even further developed.

Overall: A fantastic depiction of a small portion of the manga. Even though the OVA was only 2 episodes long, so much was covered and conveyed. This was both satisfying yet also left me wanting for more, or at least continuing the series to the end. There was no filler moment, keeping the pacing intense and suspenseful. If only the 2nd series could have been on level with this. For all Tsubasa fans, this is an absolute must-see. For those who have not touched the series, read the manga and then watch this.This will not disappoint. In fact, this made me wish that more OVA's could be dedicated to the series, addressing all the major scenes.

Story: Let me start off my telling you that you need to be caught up in the manga in order to understand what is going on. The story starts around the end of volume 21 to 23. However, they make a numerous amount of flashbacks of scenes from the manga that were not in the anime or Tokyo Revelations. The flashbacks did make sense with the storyline though I wish that the producers would have made another season with the events between Tokyo Revelations and Shunraiki. The story also alludes to scenest that are yet to come. Without reading the manga, you'll be lost. That being said, the plot delves in deeper and there are HUGE plot twists. The pacing is similiar to that of Tokyo Revelations so all of things are happening at once. However, the pacing is the same in the manga so one thing that Shunraiki does expectionally well is that it holds true to the manga. It does get confusing but I loved it either way. Also, it has a light touch than Tokyo Revelations which was much darker. There is some humor and the setting is also not as gloomy. For Tsubasa fans, this is a must watch and this is also how the second season SHOULD have been.

Animation: BEAUTIFUL and BRILLIANT from start to finish. The ending were just credits but apart from that, it was stunning. The colors are bold and the backgrounds are stunning. The movements are fluid and have a flow to them. It's not choppy and the expressions, costume/characters designs are just amazing. I don't just hand out 10s so the animation is superb. The opening also has a different feel to but I still like it. Also, please watch this in high resolution because Tsubasa really deserves it. It would be like watch a fuzzy version of AIR. It just won't be the same experience.

Sound: I was a little disappointed with the new tracks that they added to Shunraiki. I happen to love Tsubasa's soundtrack and was overjoyed when I hear some of my favorites like: Ship of Fools, Hear My Prayer, and I Talk to the Rain. Sadly, the new soundtrack pieces did not have the same feel as the original. However, that was my only complaint. I especially loved the opening and ending tracks and the seiyuus. Terrific on the years.

Characters: AMAZING. I love the development that occurs. I don't want to say too much because I don't want to give anything away. Tsubasa's characters show so much depth and personality that you can't help love them (or hate them in Fei Wong Reed's case). I do wish that would show more of their past instead of relying on short clips and the manga. However, I still love them and Shunraiki does a great job even though it's only 2 episodes.

Overall: Read the manga, then enjoy the OVA. Also prepare for your mind to blown again like in Tokyo Revalations but with a lighter feel to it. It does not disappoint but it will make you want the producers to make a real second season of Tsubasa.