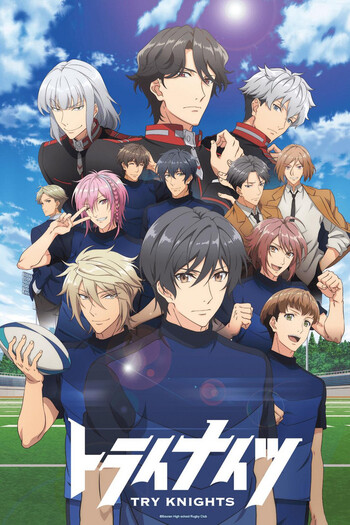 Even though this series is based off of a manga, realisitically Try Knights was created solely to capitalized on Japan hosting the 2019 Rugby World Cup. So in a way it felt like a 12-episode advertisement for the sporting event. The effort used in the making of Try Knights pretty much proves this.

The main story focuses on a pair of rugby-playing brothers with different attitudes and career paths. The older brother has a superiority complex and views the younger brother as unfit to play the sport. The older brother prefers atleticism while the younger brother favors a more tactical approach to the sport (which was explained by his chess background midway into the series). The younger brother builds a team at his new school with a bunch of raw, rowdy players - some are actually very skilled in the sport - to take down the more prestigious powerhouse school the older brother and his band of "knights" attend (they even sit in a round table like in medieval times) during the high school tournament. It's a very cliched, uninteresting story which seems to progress very slowly and was hard to watch.

The animation was by far the worse part of the series. At times I couldn't tell if the players were playing rugby union or rugby sevens (the shorter version of the game) because the characters were too spaced out on the pitch, and there wasn't much physical contact in a sport known for being pretty brutal. The scenes of the actual gameplay were hard to watch, and most of the time it looked like still-motion animation; there was no fluidity or continuity in the animation, which was very disappointing. I'm led to believe that there was a very small or tight budget set on this series, and the quality showed. It also didn't help that the series was the almagination of a once-strong studio that has seen better days (GONZO) and a studio mostly know for producing hentai (Seven).

The characters were pretty cookie-cutter and cliched, typical of any average sports anime. As someone that values character relationships and development, there was none to be found in this series. I coudn't find any character to really root for or support. The OP and ED songs were okay, but nothing special or memorable.

The only positive that I can draw out of this series is that they did give out good explanations of some of the basic rules of rugby. So even someone who's new to the sport or has never seen a rugby match can get a decent understanding on how the game works.

Rugby is starting to gain popularity in Japan, and this is the second rugby-specific anime out there that I watched (the other is the vastly superior All Out!!). But as far as sports anime goes in general, Try Knights is one of the worst you'll watch.

this show fails massively as a sports anime and its disappointing because i had great expectations for it.

the manga has a cool art style/concept and is wayy better! GONZO just failed to deliver a good adaptation.

the animation was very low budgeted and it was painfully noticeable... it threw me off from the very first episode.

the storyline had no sauce and the characters were all meh...

i was hoping for a redeeming quality but i couldn’t move pass the 3rd episode...

This was the first sports anime I ever watched so I am not sure what is normal for this type of anime or not. For my taste it was meh.

Each episode was 22 minutes long. My favorite part of the episodes was the short rugby lessons for the viewer at the end to explain the game rules and that is why I finished it.

The character development was lacking, perhaps they needed air time for the sport itself. The story a simple one. What I found really, REALLY odd was the rival team acting like knights of the round table, literally. Complete with round table and chairs, a throne and kneeling underlings. I was asking what is this weirdness? Were they trying to put king Author into this? Why?

The characters hardly looked like athletes to me. They were too scrawny and their faces too similar. I suppose that is why they used strange hair & eye color, otherwise we could not tell them apart but why such feminine men? Sheese.

While I did not hate it, I did not enjoy it either. It was just not interesting to me on any level.

I’m convinced Try Knights isn’t a real show, but is instead, the messy thing that happens when you throw all the sports and yaoi tropes you know at a wall to see what sticks. A memo to all the cooks out there: this is precisely what happens when too many of you cram yourselves inside the same sweat kitchen to try and come up with something bizarre.

For a show named Try Knights, there’s nothing in here that even remotely suggests any form of hard work or effort that was exerted to at least make this watchable. I wish I could tell you this was so bad it’s good, but alas, with a lack of Try and an even more distinct lack of anyone you could call a Knight, Try Knights is just so bad, it’s… well, it’s bad. Don’t let the horrendous out-of-context screencaps fool you – this show is 100% guaranteed to not be worth your time and effort.

But Franco, I hear you saying, why’d you go out of your way to watch this thing anyway?

To which I say, I’m watching this so you don’t have to, you dipshit, now go back to wherever you came from and let this teach you not to kick a gift horse that’s staring at you so nicely in the face next time. Aren’t you glad I cared enough to finish this shitshow and report all the lousy details to you?

Watching Try Knights shouldn’t even qualify as torture – that’s how bad, bland, and outright boring this thing was. Nothing is earned and the stakes are things you can laugh at for days. The characters aren’t much better either, with your leads representing the two sides of the age-old sports debate: athletics or tactics? Your leads clash, they argue – hell, one of them threatens to put a collar on the other guy if it will mean their lousy team wins a single game. Take a wild guess which of the guys represents which side of that age-old sports debate.

And somehow, we’re led to believe that these two freaks like each other and are secretly smooching each other behind closed locker doors.

The longer this goes on, the more I’m struggling to find even one thing to help redeem this entire mess. But I guess I’m shit out luck today, because there’s practically nothing here that’ll help pull this thing up by the shoestrings. The animation is balls, the soundtrack is non-existent, the characters are stupid cut-outs who deliver their lines like hostages mouthing off all the stupid shit their kidnapper is forcing them to say, and the storyline is so bare-bones, you could cut your knee open by tripping on all the speedbumps this show likes to think are plot twists.

So okay, there might be some entertainment value to get from this one, but that’s only if you’re sturdy against stupidity. And even then, don’t be surprised if you’re having a hard time trying to grasp onto something solid here. There are tried and tested anime viewers I know here who tried to take on this thing and lost terribly. Not that I blame them. Taking on Try Knights isn’t even a fight worthy enough to be called good and now that I’ve finished it, I’m almost sorry I allowed such a shitstain to taint my anime viewing resume.

But the things I must do for sports anime sometimes. Are we ever going to get a decent rugby anime after all? Only time will tell, maybe. But until then, there might be at least some comfort to be had in knowing the skinny gay men of Try Knights aren’t going to be considered standards of the sport anytime soon.

Alright hear me out XD

I liked episode one. I thought it was interesting and I liked the dynamic between Riku and Akira and I still do like them after completing the show. But that CG was so AWFUL. I actually had to pause some earlier episodes because the animation was so terrible and the art was sooo inconsistent to the point where it was literally killing me to watch ;3;

I thought the message behind it was nice. Like you should always try even if people tell you can't do it! Although you could probably get that message from a billion better animes :/

The last episodes, specifically the last two, were good in my opinion (especially in comparison to the beginning). I wish they expanded more on the brothers relationship because seriously Reo goes from being a complete dick to be supportive in like five seconds - 3 -. Also they never say who won the final friggin match! And now they're on a team together in the Olympics or something???

But anyway, I'm definitely gonna read the manga. Maybe I'll enjoy it more without the animation distracting the crap out of me and hopefully everything won't be so rushed.

P.S- If you want to animate something badly PLEASE don't pick a sports anime! Just seems like a bad idea :P

Double P.S- I'm not good at rating things so don't kill me pls