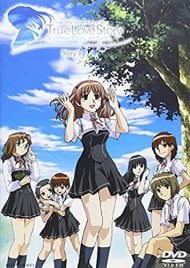 When Morisaki Yuuta ran into a girl in the school hallway that day, he had no idea his life would change forever. As a member of the photography club and a fledgling to the world of women, Yuuto's life has been turned upside down by the entrance of not one, but several women into his life! From old friends to new acquaintances, it will be tough figuring out who to choose!

StorySay this with me: "Done before!" .. and one more time for good measure: Done before!!!! Yes folks, that's right. Yet another plodding and totally unoriginal dating-sim game transition to the big screen. I'd like to talk about features of True Love Story that other dating-sim converts don't have, such as an interesting plot, good animation, likeable characters, etc. Unfortunately, I can't. True Love Story easily succeeds at seeming like a total ripoff of every other dating-sim anime out there, down to the detail. First of all, we have the same kind of unrealistic love story between high schoolers who barely know each other. Then there's the fact that every single human being with a vagina happens to like the main character, for who knows what reason. And of course, to top it off, there has to be something about how several of the main characters made a promise years ago, which they just now remembered. Seriously, what's with the making promises/memory loss thing? Why is it that at least 40% of all dating-sim/h-game to anime transitions have to put something like that in there? Is it something that everyone fantasizes about in Japan or something? Or maybe a common occurance? Regardless, True Love Story has it, so if you are one of those people who is addicted to the same generic story, go for it! In fact, it even contains elements of other dating-sim/h-game transitions right down to the actual plot elements, such as everyone going to see a fireworks show, and a legend that you should be there with a sig other, etc. (Pia Carrot movie, anyone?) The bottom line is, the plot is absolutely generic on every level. Any time a character is introduced, you know they are going to want the main guy somehow. AnimationWhile the animation wasn't totally horrible, it did still have some fairly major shortcomings. Namely, the character designs. Most of the characters suffered from square-head syndrome, which made them look odd. In addition, many of the females have wider shoulders than the males! In general, all the females looked fairly manly with their haircuts and facial structure, except a few. In general, there was just something about the animation that didn't sit right with me. I think it was the thickness of the lines. The backgrounds were sometimes very simple, with only a few solid colors. This against very thick black outlines of the characters made it seem almost simple and crude. At times, too, the characters' faces seem deformed because the eyes become horizontal oval from far away shots. The general strangeness of the thick lines and such reminded me of Magical Chocolate, sort of... but obviously not as bad. In any event, it wasn't that fantastic, thus the lower score. SoundWhile the intro was relatively catchy, the rest of the music failed to deliver. Generic and in the background, there's not much to speak of about the music. CharactersI just can't give high scores in the character category if all the characters are the ultimate stereotypes for the genre. As mentioned in the story section, every single character was uninteresting and non-unique. All the girls fit their own roles (the whiny clumsy one, the glasses-wearing bookworm, the old tomboy turned beauty acquaintance, etc), and all want the main character, as usual. The characters don't really develop at all. In fact, besides the main male character, so many people are introduced that there isn't even really time to develop any other character. Nothing really more to say here, except the characters were shallow and stereotypical. OverallNothing about True Love Story is unique, in any way. Not with its genre, its animation, or characters. Everything about it gives you the impression that it was just ripped off from yet another series, and doesn't convince you to watch it again. From the average animation, to the stock characters, to the bland music, this isn't a very entertaining or memorable watch for anyone. As far as rewatchability, I have absolutely no desire to see this again, and I can't see why you would either. Even people who like dating-sim transitions to death probably wouldn't want to watch it again.. there's nothing about it which makes it unusual enough to want to. Two thumbs down from me.

-Story- The story of True Love Story centers around a regular guy named Yuuta, and a girl who has a crush on him. The overall story is really weak, with no redeeming qualities. The dialogue was terrible, the story was not that original, and everything just seems like the story was half-assed. Most of the story is driven by Yuuta's sister dragging him places to meet girls that she knows, and even that is boring. It is not something that is pleasurable to watch. There was nothing that made me interested in the story at all. This show tries to be a harem show without having the proper time requirements to develop all of the love interests to the point where the audience cares. Most of the "love interests" are just left off on the edge with the audience having only a faint clue as to who they are. -Animation- This series has got to be the worst offender so far of my problem with stills. Most shows use them for backgrounds and establiching shots, but in True Love Story, even the main characters appear in stills, while in the foreground. Also the characters looked terrible and they were not able to emote a single feeling. The backgrounds were also generic beyond belief. -Characters- I found most of the characters to be unnecessary. Outside of Yuuta, his sister Ruri, the main love interest Hina and the secondary love interest, Yako, there are no other necessary characters. These four character are the only ones needed to tell the story effectively, and even then they all seemed flat and boring. -Overall- I would not recommend this to anybody who I did not have a personal vendetta against. Just leave this one alone and watch something that actually might entertain you.