Tristia of the Deep Blue Sea 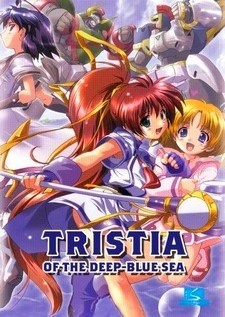 Nanoca Flanka is a genius inventor who has been sent to the seaside town of Tristia, in order to help revive its troubled economy. Wanting only to invent new gadgets and work on Tenzan, her battle golem, Nanoca is just itching for a new challenge when one is thrown her way: compete in a golem competition for fame and glory! Winning will not be easy -- at least, not if Panavia Tornado, her self-proclaimed rival has anything to do with it! Can Tenzan and Nanoca steal the show, or is their winning streak finally at an end?

StoryTristia of the Deep Blue Sea is actually focused on a girl named Nanoca, who likes to invent golems and invent various things. The story we are told is that she has been sent to Tristia to help revive their economy, though we never really understand many aspects of the story. Who sent her? How was she supposed to help revive the economy? I suspect that fans of the manga or whatever this was based off of would understand these things, but unfortunately for the regular viewers, we don't. Anyways, rather than being a show about inventing or neat things like that, the entirety of the two episodes revolves around a golem competition which ends up being very disappointing and boring. Mecha fighting someone else's mecha: OK folks, we've seen it before, and the only thing Tristia has the other anime series doesn't have is pretty and better animation. It's unfortunate, since the OVA strongly seems like something that would come straight out of an RPG at first, right down to the animation and music. Unfortunately, it ends up being rather plodding after the first few minutes, and watching a mecha battle for two episodes just wasn't entertaining in my book. AnimationVisually, Tristia is definitely a treat. It really looks like something that would come straight out of an older RPG, especially with the shots of city and colors used. There was a high attention to detail, especially with scenery shots, and the colors used were mostly pinks, blues, and other light but still vibrant colors. The character designs were an awful lot like Tenbatsu Angel Rabbie, with super cute girls (in a kawaii, as oppoed to sexy sort of way), and the designs of the other monsters (Nanoca's friend the wolf, for example) were well done as well. The mecha designs were interesting, but still fairly generic. They definitely were colored well in any event. Really, if you watch this for any reason, you'd probably do it for the animation. SoundThe audio, like the visuals, reminded me a great deal of an RPG. Light orchestral tunes were used most of the time and at all the appropriate times. The volume was good, not too overpowering or too much in the background. Definitely nothing fantastic, but still pleasing and very appropriate for the OVA. Voice acting was fine, but Tenzan's "Yes master" was a bit cheesy. Come on guys, can't we come up with anything a little more exciting for what mecha say to their masters? CharactersThere were a variety of characters in Tristia, but none were developed even a little. We didn't even understand why Nanoca has her talents or what she is doing in the city for god's sake! I believe this OVA was supposed to be longer and ended up falling by the wayside, so it makes sense I suppose. Still, I wish there would have been something more as far as the characters go. Most of them looked so similar or had such a small role that it didn't matter. Only Nanoca, Tenzan the golem, and her wolf friend were in the forefront. Oh, and Panavia, her rival. These characters fit their shallow roles they were given, but were uninspiring at best. OverallOverall, Tristia was a bit of a disappointment. An invention type series with great animation? Sounded fantastic to me, but ended up being something a lot more generic and uninteresting. Watch it for the pretty animation, the good music, or the fact that it's reminiscent of an RPG. Otherwise, I'm not sure if it's worth the viewing.

Tristia of the Deep Blue Sea is an ova based off of a PS2 and PC game in which a girl named Nanoca Flanka is sent to the sea-side town of Tristia to help revitalize the local economy though the questions associated with why she was sent there are left unexplained in the ova and you would have to have had played the game to understand some of these things.  But the ova doesn't even really focus on these things and instead tends to focus on the golem competition that is at the center of the two episodes.  That pretty much sums up the entire series an extremely lame mecha competition/battle with some rather lame robots.  That's pretty much all you need to know about the story of Tristia.  Though that's not to stay that the ova doesn't have anything going for it.  In the visual department it looks fairly nice though about what you would expect coming for an show based off of a game.  The characters while for the most part generic still looked nice and while the mecha were lame they were still somewhat interesting to look at.  Though the sound had some good points and some bad points.  The soundtrack was overall fairly decent but the voice acting I thought was simply terrible, but that's just me.  Overall if you go into Tristia not expecting a whole lot then you'l come out getting what you expected.  But if you go in expecting something great or decent then you'll leave mostly disappointed. 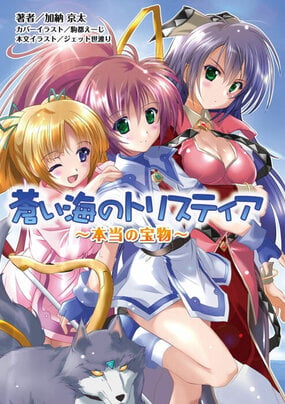