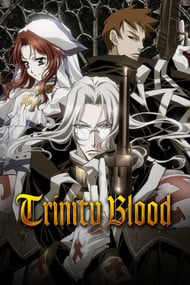 Trinity Blood could have been a good anime, but it fails to deliver. The premise is interesting, presenting all the elements necessary for an exciting political intrigue story, but the shortcomings and drawbacks are so many that I'd say you can safely avoid watching it.  There's the Vatican in Italy with a teenage pope manipulated by his older cardinal siblings, the Vampires ruled by a Vampire Empress in their own country somewhere east of the Vatican, Albion which is our contemporary UK under the reign of an ageing queen, and then a covert and obscure Rosen Cruiz Order that wants to undermine and overthrow the existing balance of power. Humans hate vampires - backed by the religious beliefs of the Vatican - and vampires of course believe humans to be an inferior race, so we're on the brink of a full-scale conflict. And this is basically the only interesting part, because the rest is all so disappointing. The story isn't developed well, it's slow to start and there are several filler episodes. There are plot-holes and inconsistencies and quite a lot of contradictions. The backstory isn't clear at all, so you don't understand why the bad guys are so bad (and the main antagonist btw is introduced really late in the story), you don't even understand why the main protagonist is as he is and exactly what his motives are. There are just a few hints here and there but none of your questions get an answer. It's executed in a sloppy way. And the ending too is quite lame and absolutely unsatisfying. And it felt rushed. Just a few characters are fleshed out and nearly none are developed. Abel Nightroad is practically the only reason why you go on watching the anime. He reminded me a lot of Vash in Trigun, clumsy, kind-hearted and good-natured, he becomes totally cool as soon as he activates his crusnik powers. But his past remains a mystery. And, given that he is so powerful, I couldn't really understand why he never seemed capable of acting on time avoiding thus nefarious consequences but just waited for the worst to unfold. Another decent character is the Vampire Empress, Seth. And maybe the pope's sister, Caterina. But, as already mentioned, nearly no backstory is given for any of the characters. The rest are stereotypes. And this is true also for Esther, the female protagonist, who is on top of that also incredibly annoying. So, all considered, I found this anime to be lacking in regards to the characters and the plot. And it's a pity because if both characters and story had been presented and developed better, it would have been a good watch. You can tell the elements are there for something good, but it just doesn't manage to deliver.

This was aired on Animax and I watched it bit by bit as (I always skip episodes.) even though I still liked it but until Recently I decided to re-watch entire Season And it was by far best Vampire Anime I've ever watch the music especially the song  <h3 class="r">Trinity Blood OST - Requiem ~ Inori</h3> Is one of the best songs I've heard very suits the Anime and story itself. the main character Abel Nightroad has one of the best Traits a main character should have, And personally I really like Seth Nightlord. =)

Trinity Blood Review, Trinity Blood takes place several hundred years in the future in post apocalyptic Earth divided between three kingdoms.  The Empire of the True Race, is a vampire kingdom with its capital in Byzantium.  The Vatican leads the New Human Empire and opposes the vampires in what is pretty much a cold war.  And Albion, or England, with its capitol in Londinium, is a technologically advanced society made up primarily of humans and a “ghetto” of vampires.  There is a fourth faction, the Order of Rozen Cruiz, which seems set on ending the uneasy peace and changing the cold war to a full fledged world war.  The main character, Abel Nightroad is neither human nor vampire.  He is a crusnik.  I think I will let Abel explain what a crusnik is in his own words: “Has it never occurred to you that there may be something beyond the two.  Humans eat the flesh of cows and birds.  Vampires drink the blood of humans.  So then, why not a being still further up on the food chain.  A being which preys upon the vampires.” - Abel Nightroad An interesting idea, especially since he looks and acts completely human until he unleashes his crusnik power.  Still, there’s a lot more going on here.  There’s a lot of political intrigue as the various factions try to either bring about peace or war between the human and vampire empires. Let’s break it down: Art:  9/10.  Wow, the designers really did an excellent job.  The sets and backgrounds are very detailed.  The animation is smooth, and incorporates 3D CGI with traditional 2D animation very well.  The costumes are rich, detailed and colorful.  (Full disclosure, I have cosplayed as a character from this series.)   Being an actual armorer (not costume armor, real steel and brass) I am also blown away by the armor in this show.  The inquisitorial department, which is basically the military wing of the Vatican, wears armor that are some of the most realistic armor designs I have ever seen in anime.  The inquisitorial armor has no spikes or ridges or protrusions common in anime (and completely unheard of in real medieval European armor).  It looks like real medieval armor, but with rocket packs and advanced weapons attached. Story: 7/10.  I would love to rate this higher on story.  It really has a good one behind it, but it has some flaws.  First and foremost it takes too long to get going, not helped by having two complete filler episodes before the main plot arc is introduced.  As it is, things don’t really get going until episode six, and even then, only slowly.  Finally, and this is the worst sin an anime like this can commit, it has NO ENDING!  The story simply stops at the end of the final episode, with no resolution whatsoever, and no plans to continue the series.  The creator, Sunao Yoshida, unfortunately passed away, meaning the series was just stopped, and though the novels were finished by Kentaro Yasui, the anime was not.  Finally, the anime also seems to assume you have read either the novels or the manga, as it gives very little of the very detailed backstory.  If you want to know where the vampires come from, the origin of Abel and the other crusniks, etc., you will need to read the other materials. Music: 8/10.  The music fits the theme of the series.  Takahito Eguchi, better known for video game music, does a solid job here. There are vocals with a modern beat, lots of orchestral and instrumental numbers including some great piano pieces that really set the feel of the scene quite well.  The closing song, Broken Wings, is quite good, as well as being in English. The Dub:  8/10.  There are pros and cons to the dub.  Abel Nightroad’s Japanese voice, Hiroki Touchi, is easier to take on the whole, whereas Russel Wait seems a bit obnoxious when Abel is in his goofy human form.  However, Wait does an excellent job of changing his tone when Abel is in crusnik mode, which is a great contrast, and is a great audible cue as to when things are about to get messy. The rest of the voices are well done.  The child Pope is equally obnoxious in either English or Japanese, and I’m pretty sure he’s supposed to be.  Hilary Haag, one of my favorites, plays the Empress, and her voice is perfectly suited to that character. Overall:  8/10.  Trinity Blood is a must see.  And I believe this anime is truer to the original novels than the manga (which I also have).  Unfortunately, you will inevitably be left hanging by the abrupt end of the series.  Just be ready for that, and try to manage your expectations.  Other than that, great show! Recommendation:  Definitely watch this series.  If you love subs, then everything you need is right here on Anime Planet, but if you want to watch it dubbed, then you’re going to have to buy it. If I was going to recommend a set, I would probably go for the collector’s edition offered by Funimation.  At least it comes with extras.  However, its expensive.  The viridian collection is an older box set, but still available on Amazon at a great price.  It will do if you’re on a budget, but you get no extras.  -Brian McAfee 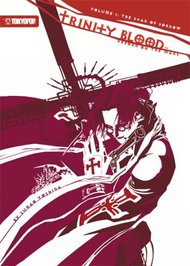 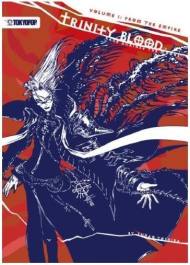 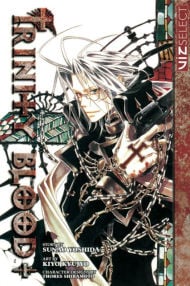